If there was any element of surprise in George W. Bush’s second inaugural address last month, it lay in the vehemence with which he reiterated his administration’s international goals. The vulgar triumphalism was at odds with the fate of what was supposed to be the showpiece of the neoconservative Project for a New American Century: a Middle Eastern outpost of “freedom” and “liberty” that would bring imperialism back into fashion.

The Iraqis had other ideas, though. Apart from a handful of ambitious exiles such as Ahmed Chalabi and Iyad Allawi, none of them had expressed any interest in regime change through an American invasion. Consequently, Iraq is today in a worse state than it was at any time under Saddam Hussein’s misrule. Of course, no one could expect Bush or any of his henchmen to acknowledge this, but there was nonetheless some expectation that the disastrous course of events in the occupied country would, at the very least, lead to a subtle change of direction in US foreign policy. It was even rumoured that leading neocons such as Paul Wolfowitz and Douglas Feith would effectively be defanged.

None of that has come to pass. It’s Colin Powell who has gone, while Donald Rumsfeld’s exemplary services have been retained for a second term. And it was Powell’s replacement, Condoleezza Rice, whose congressional testimony during confirmation hearings offered an explication of what Bush’s extraordinary stress on extending “freedom” to “the darkest corners of the world” might mean. The reputedly erudite Rice, as yet untested as a diplomat, described Cuba, Burma, North Korea, Iran, Belarus and Zimbabwe as “outposts of tyranny.”

This expanded version of Bush’s “axis of evil” raised some intriguing questions. In Cuba, the worst human rights abuses have in recent years been taking place on a US-occupied naval base called Guantanamo Bay. If that is what Rice had in mind, it shouldn’t prove too hard to liberate Camp X-ray. More seriously, why Belarus and not Uzbekistan, which harbours an even less palatable regime? Could it have something to do with the fact that Uzbekistan also hosts an American military base? And why Iran but not the at least equally repressive and decidedly less democratic Saudi Arabia?

Iran is, of course, a special case as far as the United States is concerned. Among the fanatics guiding Washington’s foreign policy agenda, there were some who at the very outset advocated extending the invasion of Iraq to embrace neighbouring Iran as well. Last year the stream of anti-Iranian invective showed signs of turning into a torrent — with a stress, remarkably, on the same excuses that were cited as justification for blundering into Baghdad: weapons of mass destruction and possible links with Al Qaeda. And, as in the case of Hans Blix and Iraq, there have been insinuations that the International Atomic Energy Agency’s Mohammed ElBaradei is covering up for the Iranians. 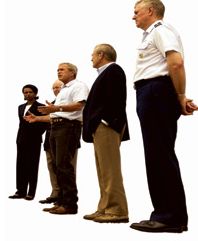 Although reports of the Pentagon drawing up war plans have been circulating for some time, Seymour Hersh’s revelation last month that US forces have for several months been conducting reconnaissance missions into Iran was a bombshell. It shattered the complacency of all those who felt that the American rhetoric was largely bluster aimed at intimidating Tehran into abandoning its nuclear ambitions. The missions are apparently aimed at selecting targets that could be destroyed in an air attack.

Hersh is a highly respected investigative journalist who won the Pulitzer Prize back in 1970 for exposing the My Lai massacre of Vietnamese villagers — mostly women and children — by American troops. Last year he was instrumental in bringing the Abu Ghraib scandal to light, and subsequently published a book claiming that the abuse of prisoners was sanctioned at the highest levels. He relies on a network of well-informed contacts in government ranks, the military and in intelligence agencies. They go unnamed in his reports, but the reports, more often than not, are remarkably veracious.

In another report last year, Hersh revealed that Israeli operatives were active in Iraq’s Kurdish areas, because Israel was convinced that the American venture in that country was doomed to failure, and it wanted to take precautions against the likelihood of Iran influencing the future shape of Iraq.

As is their usual practice in such cases, last month US government officials ridiculed Hersh’s report in The New Yorker and claimed that it was riddled with inaccuracies, but stopped short of denying it outright. They also could not be bothered to pinpoint any of the “inaccuracies”.

One of the most troubling aspects of the report, from this country’s point of view, was the disclosure that Islamabad has been cooperating with the US in this crazy venture. “[A] former high-level intelligence official told me,” writes Hersh, “that an American commando task force has been set up in South Asia and is now working closely with a group of Pakistani scientists and technicians who had dealt with Iranian counterparts. (In 2003, the IAEA. disclosed that Iran had been secretly receiving nuclear technology from Pakistan for more than a decade, and had withheld that information from inspectors). The American task force, aided by the information from Pakistan, has been penetrating eastern Iran from Afghanistan in a hunt for underground installations.

“The official added that the government of Pervez Musharraf … has won a high price for its cooperation — American assurance that Pakistan will not have to hand over A.Q. Khan … to the IAEA or to any other international authorities for questioning. ‘It’s a deal — a trade-off,’ [he] explained….

“The agreement comes at a time when Musharraf, according to a former high-level Pakistani diplomat, has authorised the expansion of Pakistan’s nuclear weapons arsenal. ‘Pakistan still needs parts and supplies, and needs to buy them in the clandestine market,’ the former diplomat said. ‘The US has done nothing to stop it.’

“There has also been close, and largely unacknowledged, cooperation with Israel…”

From what one can gather, the plan for military action against Iran involves only air strikes — apart from the fact that the already stretched US army cannot spare troops for a ground offensive, a second gratuitous invasion in the Middle East would also be deeply unpopular domestically. Initially the idea was to concentrate on military targets, but then some bright spark suggested that bombarding the mullahs would probably provoke an uprising, leading to regime change on the cheap.

An alternative scenario envisages attacks not by the American but by the Israeli air force. After all, it is Israel that is particularly paranoid about a potential Iranian nuclear bomb (presumably having been assured by the US that it has nothing to fear from Pakistan’s arsenal). This luxury is, of course, not reciprocally available to any country in the region: even close US allies such as Egypt, Jordan or Saudi Arabia could not possibly persuade it to contemplate any sort of action against Israel’s nuclear capability.

There are perfectly good reasons for hoping that Iran does not become a nuclear power. After all, nuclear weapons are an abomination, and their proliferation only increases the likelihood of their use. But to be consistent in this argument, one must also hold that all nuclear-armed nations — from the US to Pakistan — ought to rid themselves of this evil. Far less acceptable is what India tends to deride as the nuclear apartheid approach: that such weapons are a wonderful deterrent in some hands and exclusively a means of mass destruction in others. If Iran cannot be expected to wield such power responsibly, why should the benefit of the doubt be extended to the comparably imbalanced regimes in Jerusalem and Washington?

Besides, where in the annals of moves and movements against nuclear proliferation is the suggestion that possible proliferators must be exterminated?

As for the assumption that an air force attack on Iran would trigger off a rebellion against the ayatollahs, a military assault of any kind would be unjustified even if it were true. Quite apart from the likelihood of altogether unacceptable “collateral damage”, this is not the way civilised nations are supposed to behave. The barbarism in Iraq should be serving as a warning, not an encouragement, to all humankind.

Americans also ought to be aware — but probably are not, given their reluctance to imbibe the lessons of history — that many Iranians have never forgiven them for their role in a previous instance of regime change, when the national-democratic Mossadegh government was overthrown 52 years ago, and the Shah reinstated. That intervention eventually created circumstances that allowed the clerics to profit most from Mohammed Reza Pahlavi’s unpopularity. Twenty-six years on, the mullahs may be deeply unpopular, particularly among the young, but their comeuppance at the hands of a foreign power would serve only to replicate the bloodshed in Iraq and postpone the prospect of Iran re-embracing modernity and progress.

Iranians know how to deal with their tormentors. They’ve done it before, and they will do it again. But the last thing they need right now is another layer of oppression or an untimely outbreak of obscurantist patriotism.