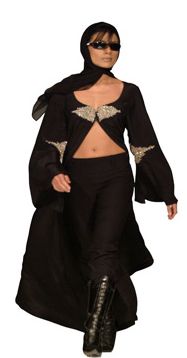 Hassan Sheheryar Yasin (H S Y), in the fashion business for over a decade, has established himself as one of the top designers in Pakistan. And he recently presented his new collection ranging from western formals to eastern bridals, at a charity show held at Al Bustan Palace, Muscat. The show was intended to aid The Association of Early Intervention for Children with Special Needs. The collection showcased a variety of traditional eastern couture, including saris and bridal wear. Western formals were also exhibited, but due to HSY’s proclivity for eastern design, this line had a traditional element as well.

Perhaps the most outrageous feature of the show was the line of risque abayas — Saudi outer garments, meant to protect Muslim women from the lascivious gaze of men. With slashed side-slits, plunging necklines and vampish cape-like designs, the abayas were designed to titillate rather than cover up. And shock they certainly did. Interesting as the segment was, perhaps a charity show for children with special needs was not quite the right setting for a political statement of flamboyant sexuality.