Like a drunk’s morning-after, Pakistan in the days following General Pervez Musharraf’s super-hyped visit to Delhi, is in the throes of confusion. Islamabad’s diplomatic gains from the mid-April summit are less obvious to keen observers of India-Pakistan relations than the Pakistani team’s exploits in the cricket field. In spite of President Musharraf’s repeated pronouncements that the fundamentals of Pakistan’s India policy are intact, increasingly, there is a perception to the contrary in the country.

“…Unless Kashmir, which is the real bone of contention, is resolved, the peace process cannot be sustained” says The Nation, a hawkish Punjab-based newspaper. And a columnist in the Dawn writes, “No wonder India… [is] ecstatic, at a lossfor words to express [its] elation at Pakistan, under a military ruler, no less finally working… India’s agenda, and far from feeling any sense of loss or shame, revelling in the spirit of surrender.”

Opposition parties, particularly the religious alliance, MMA, have lambasted the summit in Delhi as “national humiliation.”

The politicians’ derision could certainly owe in part to the fact that the General continues to hold firm sway over domestic politics. The General however has his own take on it.

“They (the opposition) would never give me credit for anything; they cannot bear that what everyone thought was impossible (lasting peace with India)… I have laid the foundation for it,” a visibly irritated President Musharrraf told a Pakistani journalist who had asked him at the end of the India visit whether this would help him domestically.

So what exactly has President Musharraf gained from his talks with Prime Minister Manmohan Singh?

Trust is the first word his close aides utter. “He thinks that Manmohan Singh is very focused and genuinely wants to settle all disputes with Pakistan. In private he (the President) has often admitted that his comfort level with Dr Manmohan is much better than it was with Atal Bahari Vajpayee,” says a military source close to the President.

Musharraf’s own statements about the ambience at the meetings and the frankness with which he raised the issues of the Baglihar Dam and Delhi’s reluctance to hand over Jinnah House to Pakistan partially explain his satisfaction with the meetings in Delhi.

“I am convinced that we two leaders have the gravest responsibility to ensure that the peace process does not go off-track, and today I got the clear sense that we both understand this very well and that is our hope,” Musharraf told a close confidant immediately after a more than hour-long one-on-one conversation with Dr Manmohan Singh in Delhi’s Hyderabad House.

However, Musharraf’s optimism does not owe entirely to his parleys with Dr Manmohan Singh — some hard-nosed considerations also underpin his assessments about the future of the Indo-Pak relationship.

“We must understand that at this point India-Pakistan relations are moving on three tracks: the first is the track of composite dialogue, which is formal and the slowest, the second is the CBMs track, which is public and reflects mutual understanding, and the third is the backdoor track, which is the most crucial because this is where the bedrock of durable peace is being built. This track has been kept away from the prying eyes of the media and directly links President Musharraf and Prime Minister Dr Manmohan,” says a civilian source closely involved in the third track.

But part of the problem for Musharraf lies in the realm of public diplomacy — here the score does not look good for Pakistan. Despite joint statements replete with lofty claims about how the discussions on Jammu and Kashmir are moving towards “a final settlement,” President Musharraf has little to show in concrete terms. 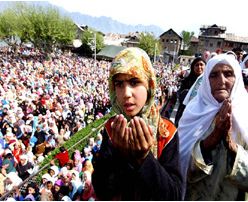 Insiders in Musharraf’s camp admit that India has not given any commitment on scaling down its troops in Kashmir, or easing the harsh laws restricting civil liberties in the troubled state. Nor has Islamabad’s suggestion of involving the leaders of the two factions of the All Parties Hurriyet Conference in the talks process, evoked a positive response from India.

At the end of his visit to Delhi, President Musharraf himself told a close aide in confidence that while he was satisfied with the peace process moving forward, Pakistan’s core concerns on Kashmir “largely remain unmet.”

Back in Islamabad, top-ranking policy makers share this assessment and express a degree of disappointment with India’s approach to addressing the Kashmir conundrum’s political and human rights dimensions. Some of the Kashmiri leaders, who met General Pervez Musharraf in Delhi, also pointed out that talks between the two countries continue to skirt around the most contentious areas of the Kashmir dispute.

“You are moving too fast, without any quid pro quo, and there is an impression that Delhi is being bailed out,” Yasin Malik, head of the Jammu and Kashmir Liberation Front, told Musharraf. The hardline Syed Ali Geelani, chairman of one faction of the APHC, was provocative, irking Musharraf by questioning the very basis of the engagement with India.

Musharraf’s impatience with dissenters of his initiatives is understandable. For him too much is at stake in sustaining the dialogue, even while he frankly admits that the progress on Kashmir remains low on the list of gains in respect of public diplomacy.

“He truly believes that Pakistan’s biggest diplomatic challenge in the post 9-11 world is to refashion its image as a responsible member of the international community which uses dialogue as the means to settle border disputes,” says one of President Musharraf’s close aides. 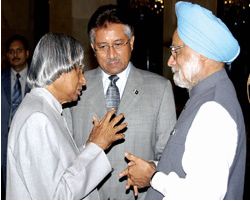 Observes a western diplomat: “He has calculated that engagement with India is the best way to address the image issue. By not subjecting dialogue with India to the settlement of the Kashmir issue (Pakistan’s traditional stance), he has at once won acclaim abroad, and lessened regional tensions. That is quite remarkable for a general in uniform whose chief scientist has admitted to running a global network of nuclear proliferation.”

Image-refurbishing is, however the only dividend of the peace process Musharraf is so keen to engage with India on.

In his frequent meetings with a group of foreign policy advisors, including intelligence officials, generals, and the Foreign Office’s South Asia experts, Musharraf’s refrain is that Pakistan has to gain “economic muscle to remain globally relevant.”

“The centre of his thinking hinges on building a strong economy as a base for strong diplomacy. If trade gets him closer to that goal, he will follow trade; if a gas pipeline is the way to effect that end, he will pursue it,” says a member of this elite group of policy advisors.

This thinking feeds into another realisation that has crystallised in military circles in Pakistan in the past few years.

“The strategic matrix has changed for us. We do not have to deal only with India . It is also Afghanistan which is less than stable, there is Iran that is threatened by the US, and the US itself which has not closed the case of proliferation against AQ Khan. It is a four front situation that requires a change of diplomatic tack,” says a top intelligence official.

Missing from the “four-front situation” is another element: a domestic pot that has been kept boiling by die-hard religious militants, Al-Qaeda hitmen, and tough sardars in Balochistan defying the writ of the state.

Add to this mix growing global and domestic pressure on Musharraf to leave his post as army chief by 2007 and allow strong opponents like Benazir Bhutto of the Peoples Party and Nawaz Sharif of the Pakistan Muslim League(N) to return to the political fray, and the Pakistani President’s precarious position becomes evident.

He has, intelligently, thus chosen peace with India as the one pill to cure his many pains. It gives the international community a big reason to continue to back him, and he uses this to blunt the political opposition, rebuild the national economy, and allow him strategic breathing space to deal with Iran and the US.

By any yardstick, this remains a delicate permutation, one that requires a fine balancing act. There is no guarantee that it will not be disrupted by freak incidents, common in South Asia. But as long as the process of normalisation of relations with India inches forward, Musharraf is likely to persist with the path he has adopted. And this is where Pakistan’s policy towards India has fundamentally departed from the past pattern: it no longer aims for a diplomatic score as exciting as Shahid Afridi’s 45-ball hundred in Kanpur; it is tuned to play a long test series, even if matches keep on ending in frustrating draws on Kashmir.

“Peace in Kashmir will come slowly, subtly and in an environment that is not vitiated by threats of war and conflict,” says a foreign office official who travelled with the President to Delhi.

To get a sense of how long this process will be, presidential sources point to the tricky Irish Peace Accord. “It started in the ’70s; moved forward with the recognition by both parties that they had to address the dispute. Facilitated by the push from an integrated EU and the US, and even with all its faults, the Good Friday agreement finally came about. Using the same yardstick, Pakistan and India are somewhere in the first phase of negotiations where there is an agreement that the Kashmir problem has to be addressed. It is not a glorious achievement, but still a very important one,” says a Musharraf aide.

Seen from that angle, the road to peace looks inextricably linked to regional stability and integration. This is something President Musharraf has clearly started to appreciate more than ever before.