That was then and now is now. In contrast to 2001, General Pervez Musharraf not only made it to Ajmer Sharif after all, but also managed to return with something much more edifying than the bitterness and rancour that accompanied him back on his flight to Islamabad that fateful July.

There may not have been any concrete outcome on Baglihar or Siachen, trade or terrorism, leave alone Kashmir, but no Pakistani or Indian analyst should make the mistake of believing the results of the recent summit between the General and the Indian Prime Minister, Manmohan Singh, were anything less than momentous. For the first time in recent years, the two sides managed to establish something resembling a relationship of trust with each other. After laying their concerns on the table, each left the meeting room with a promissory note from the other. If the General agreed to stay the course and continue to rein in the armed extremists who are out to scuttle the peace process, Manmohan assured his guest that India would not shy away from discussions about a “final settlement” of the Kashmir issue. And despite the attempts by officials and commentators to cast doubts on the intentions of the other side, both men appear determined to trust their own instincts.

The irony is that the days leading up to last month’s path-breaking meeting had seen both sides consciously seeking to talk down the hype. Indeed, at an off-the-record briefing a few hours before the General arrived in New Delhi, senior Indian officials cautioned that the impending summit was not really a summit or even a mini-summit but simply an occasion for a frank exchange of views. And yet, what transpired during the 36 hours the Pakistani President was in the Indian capital was as significant as anything the two countries have seen in recent years.

The joint statement read out before the press by Prime Minister Singh in his deadpan style may seem anodyne on the surface, but within its terse sentences and paragraphs — as well as the call made by General Musharaf and Dr. Singh in separate meetings with the press to make existing borders irrelevant — lie most of the elements of a roadmap for peace between India and Pakistan.

Though the statement avoided formally mentioning the notion of “soft borders” — the concept needs to be fleshed out and debated adequately in both countries before it can actually be served up — the summit document is noteworthy in six respects.

First, it stresses the irreversibility of the peace process now underway. The two leaders are saying that come what may, there will be no turning back from what has been achieved so far — the resumption and enhancement of cross-border traffic and people-to-people contact, including sports, and the ceasefire along the Line of Control, as well as up in the Siachen Glacier. Specifically, this means the self-imposed quarantine India brought about by cutting all air, raid and road links following the December 13, 2001 terrorist attack on Parliament, will, hopefully, never again be repeated.

Secondly, it says that terrorism will not be allowed to disrupt the relationship. The specific formulation is worth noting: “The two leaders pledged that they would not allow terrorism to impede the peace process.” Terrorism, here, is no longer a stick for India to beat Pakistan with but a problem which confronts both countries equally. If the statement implies that Islamabad will continue to work to ensure terrorist incidents are not planned or launched from territories it controls, New Delhi, too, has undertaken not to over-react to the odd terrorist incident that might still take place.

In other words, India and Pakistan have jointly resolved not to give terrorists the right to veto the peace process through dramatic acts of violence.

Thirdly, the statement stresses that the purpose of having discussions on the issue of Jammu and Kashmir is to reach a “final settlement.” In contrast, the September 24, 2004 statement issued in New York spoke of “possible options for a peaceful, negotiated settlement of the issue,” while the January 6, 2004 joint statement spoke of the “peaceful settlement of all bilateral issues, including Jammu and Kashmir, to the satisfaction of both sides.” However, the reference in the latest statement to a ‘final settlement,’ though refreshing, is hardly new. Those in India who have been critical of this reference — especially the Bharatiya Janata Party — have forgotten it is, in fact, taken directly from the Simla Agreement of July 2, 1972, Clause 6 of which commits both governments “to discuss further the modalities and arrangements for the establishment of durable peace and normalisation of relations, including the questions of prisoners of war and civilian internees, a final settlement of Jammu and Kashmir and the resumption of diplomatic relations.”

But if the words “final settlement” are not new, General Musharraf has managed to get the Indian government to make a major discursive shift. After conceding the need for a final settlement as far back as 1972, India, somewhere along the line, chose to take the view that this was unnecessary. Reams of paper have been wasted on futile debates about whether Kashmir is a core issue or not. Despite the eight outstanding issues to be resolved between the two countries under the Composite Dialogue Process, Manmohan has now agreed that Kashmir is the key. By returning to the Simla language, India and Pakistan have wisely agreed to give the Kashmir issue the importance it actually has and not remain hostage to the linguistic sensibilities of those who do not know the diplomatic history of the bilateral relationship.

Fourthly, having stressed the need for a final settlement, the statement suggests preliminary steps consistent with the notion of soft borders. Thus, it speaks of further measures “to enhance interaction and cooperation across the LoC,” including passenger movement and trade.

Allowing trucks to cross the LoC — presumably laden with fruit on the outbound, and Pakistan-made consumer goods on the inbound — is a radical leap of faith for India and as it will eventually allow the economic geography of the region to revert to its pre-Partition days. The position of Jammu as an entrepot, not just for the valley but also Poonch and Rajouri — once the road to Rawalakot in Pakistan is opened up (or even the old ‘Mughal Road’ to the valley) — would be undermined, which could have unintended consequences for Jammu and Kashmir. Though Pakistan has tended to oppose the opening up of the LoC to trade between the two parts of the erstwhile princely state, it is India which could stand to lose because a softer LoC allows Indian-administered Jammu and Kashmir to bypass Indian trade routes to the outside world.

Fifth, the joint statement undertakes to speed up deliverables, such as an agreement on Siachen and Sir Creek, and strive for greater business interaction. So long as Pakistan had the impression that India was using confidence-building measures (CBMs) as a diversionary tactic to avoid reaching a final settlement on Kashmir, it was not interested in forward-movement on trade or fast-tracking the solution of specific disputes that have readymade agreements for the taking. By not shying away from the Kashmir issue, India has achieved what it wanted: a Pakistani commitment to put easier problems on the front-burner.

Sixth, Dr. Singh and General Musharraf have not only endorsed the proposed Iran-Pakistan-India pipeline in the face of U.S. criticism of the project, but also expanded the scope for energy cooperation between their two countries. Given the growing demand for energy in both Pakistan and India and the need for South Asia to access Iranian and Central Asian oil and gas, it is essential that the two countries start a broad energy dialogue. 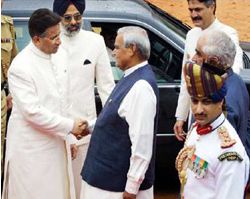 In his interaction with Indian editors, General Musharraf reiterated the proposal for soft borders made by him a few days before the summit in an interview to Reuters. It is my belief that the Indian side — our leadership and the bulk of our media — has not yet understood the shift that the General’s endorsement of soft borders along the LoC implies. To drive home the point, he reminded the editors of Pakistan’s uncompromising position that the LoC should not become the border, India’s official position that that there could be no redrawing of borders and the only possible via media between these two positions, a soft border. “The LoC cannot be permanent, borders must be made irrelevant and boundaries cannot be altered. Take the three together and now discuss the solution,” he said.

A soft border is the only administrative arrangement that allows India and Pakistan to maintain their respective de jure or de facto sovereignties in Kashmir while not coming in the way of the people of the divided state enjoying the fruits of a unified territory. The LoC need not be made permanent or redrawn; the solution is to make it irrelevant. Examples exist of territorial disputes between states that have been resolved in this manner to the satisfaction of both countries and the affected population. South Tyrol, whose people were once part of Austria but who became part of Italy following the First World War, is a good example. There is also the evolving example of Northern Ireland, where Britain was forced to concede that the administrative and political status quo was untenable.

Critics of General Musharraf in Pakistan fail to appreciate the sea-change that has come about in official Indian attitudes towards the Kashmir question in the past year or so. Admittedly, not all of this change is attributable to the General. Nevertheless, the fact remains that for the first time India has a Prime Minister who, right from day one, has been advocating soft borders as the solution. From demanding that Pakistan return to India Azad Jammu and Kashmir and the Northern Areas to the traditional fallback position of making the LoC an international boundary, the Indian position on the Kashmir issue was a rigid one. New Delhi also always took the view that the aspirations or views of the Kashmiri people were irrelevant or, at best, fully accounted for by the presence of an elected provincial government in Srinagar. Today, Manmohan says it is the need to improve the lives of the Kashmiris that must drive the Pakistan-India peace process forward. His decision to over-rule his officials on the issue of allowing passengers on the Srinagar-Muzaffarabad bus to travel without passports was a promising first sign. Hopefully, there will now be many more.

Ever since General Musharraf started speaking of finding “out of the box” solutions by negating those outcomes that are unacceptable to both sides, a process of churning and introspection has begun. By speaking of the need to make borders irrelevant, both sides have begun to move away from traditional rigidities towards a set of possibilities that are creative and bold. People in both India and Pakistan must now put maximum pressure on their respective governments to allow this process to continue.