The vice president of the Chilean Central Bank met with Balochistan’s Chief Minister Nawab Muhammad Aslam Khan Raisani in Islamabad in the last week of October. The meeting was part of a massive lobbying effort to persuade the provincial government to honour the agreement signed with Tethyan Copper Company (TCC), a joint venture between a Canadian mining giant (Barrick Gold Corp) and a Chilean company (Antofagasta PLC), on the multi-billion dollar copper and gold project in the Reko Diq area of Chaghi.

This project shot to the limelight once again, following serious allegations of the province’s assets being sold at throwaway prices, ignoring the interests of both Balochistan and Pakistan. According to the agreement, the Balochistan government is entitled to 2% royalty and a 25% share in the profits, which is being viewed as “pittance” by some circles, given the vast reserves.

The copper reserves at Reko Diq in Chaghi are part of the same geological belt that runs through Afghan territory. And it is said to be extremely rich in minerals. According to a report published in The New York Timeson June 13, 2010, “The previously unknown deposits — including huge veins of iron, copper, cobalt, gold and critical industrial metals like lithium — are so big and include so many minerals that are essential to modern industry that Afghanistan could eventually be transformed into one of the most important mining centres in the world, the United States officials believe.” Further, “An internal Pentagon memo, for example, states that Afghanistan could become the ‘Saudi Arabia of lithium,’ a key raw material in the manufacture of batteries for laptops and BlackBerrys.” 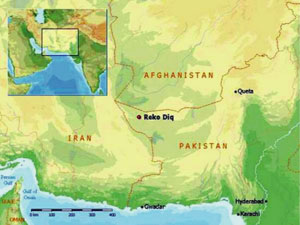 Reko Diq has been mired in controversy for years and has players on all sides angry and frustrated.

Some circles maintain that the mineral resources of Chaghi are much larger than the reserves that have been discovered in Afghanistan. Some mining experts contend that the copper reserves in Reko Diq are the second largest in the world; according to another estimate, they constitute the seventh largest reserves of copper in the world. If that is indeed the case, both the province and the country would become as rich as any of the present oil-producing countries in the Gulf if their due share is ensured in this deal. The TCC had put the worth of Chagi’s resources at 2.6 billion dollars, according to the current world price of the two minerals, but independent experts argue that it could be many times more. Balochistan Chief Minister Raisani contends that the total yield may be close to one trillion dollars.

The initial agreement was drawn up between Balochistan Development Authority (BDA) and Australian Company BHP Ltd. in 1993, and a License of Exploration was awarded to the company. However, BHP (now known as BHP Billiton after a 2001 merger) floated its shares in the international market in 2000 and TCC secured them. The Balochistan government maintains that BHP sold its shares without taking the provincial government, the real owners of the reserves, into confidence. “Either the Balochistan government did not take notice of it or BDA, a department allegedly notorious for its corrupt practices, kept the provincial government in the dark about the sale of shares by BHP.”

The former provincial government, headed by Jam Muhammad Yousaf, subsequently awarded the exploration license to TCC. Sensing something fishy in the deal, the opposition in the previous Balochistan Assembly created a huge uproar and demanded that the details of the deal be made public. Despite assurances by the provincial government, the former chairman of BDA, Muhammad Farooq, who like his department is also accused of being corrupt, blocked the government’s move to present the deal in the assembly.

He took Jam Muhammad Yousaf to Chile under the pretext of negotiations with the companies. “Despite knowing the facts about the meagre share of a backward province like Balochistan in a trillion-dollar project, Jam Yousaf allowed the renewal of TCC’s exploration license for another three years, which means it is valid till the end of 2011,” says a source at the Mines and Minerals Department of Balochistan, on condition of anonymity.

Incidentally, Raisani was part of the opposition in the previous assembly and was aware of how the interests of the province and the country had been compromised. He started lobbying and convinced the federal government to terminate the agreement with the company. After receiving a nod from the centre, a meeting of the Balochistan cabinet decided to cancel the deal in August last year. The chief minister then transferred the project from BDA to the Mines and Minerals Department of the provincial government.

The provincial cabinet’s decision was a serious blow to TCC, which swung into action and utilised diplomatic channels from their respective countries to seek a reversal. The foreign ministries of Canada and Chile approached Pakistan’s foreign ministry and expressed their concern over the decision of the Balochistan Cabinet, revealed a source at the chief minister’s secretariat. The foreign office, in turn, wrote a formal letter to the provincial government seeking an ‘explanation.’

However, the Balochistan government seems determined to run the project itself and has constituted a board of governors, headed by the nuclear scientist Dr Samar Mubarakmand, for this purpose. Further, it intends to establish a refinery in Chaghi, where the copper and gold will be refined. It has allocated one billion rupees for this project in the budget of the current financial year. “The provincial government not only wants to secure maximum profit from this project, but also hopes to provide employment opportunities to the locals by establishing the refinery in Chaghi,” says Raisani.

Incidentally, the Chinese company that is handling the Saindak project takes raw material to China for purposes of refining, and TCC too has no plans of refining the metals in Chaghi. It intends to convert the raw material into powder and then transport it from Chaghi to Gwadar for onward shipment to other countries for purposes of refining. “If the produce from these huge assets is not refined in Chaghi, the locals would stand to lose in terms of job opportunities. This does not bode well as the problem of unemployment in Balochistan is becoming grave with the passage of time,” says a Baloch student. TCC, meanwhile, has no intention of giving up on the project. 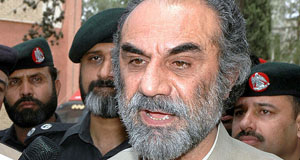 Sensing the Balochistan government’s reservations on the agreement and its determination to run the Reko Diq project, TCC has submitted an amended feasibility report to the provincial government. “The new feasibility report comprises 100,000 pages,” Advocate General of Balochistan, Sala-ud-Din Mengal informed a bench of the Supreme Court headed by Chief Justice Iftikhar Muhammad Chaudhry, during a hearing of the petitions challenging the agreement with TCC. However, “the provincial government has not, so far, given the license for mining to any company. It has now formed a committee to review the amended feasibility report of TCC and, additionally, is making arrangements to get the report further examined by international experts,” the advocate general added. He said that after examining the feasibility, the Balochistan government would take a decision regarding whether to give the mining license to the TCC or not.

Informed sources in the provincial government maintain that certain lobbies in the federal government are in favour of handing this project to the Chinese company that is currently running the Saindak operation. The Chinese company has established a smelter there, which extracts the copper and gold from the rocks. Ostensibly, the government is looking to further strengthen its strategic partnership with China, which is not only working on a mining project in Lasbela near Karachi, but is keen to run the Gwadar Port as well. Meanwhile, the top bosses of both companies from Canada and Chile continue to lobby with high-ups in the federal government, including President Asif Ali Zardari and Prime Minister Syed Yousaf Raza Gilani, to seek their help in convincing the Balochistan government to honour the agreement with TCC.

Addressing a press conference in Quetta, the chief executive of TCC stated that they planned to address all concerns of the Balochistan government regarding the project. He also said that they were ready to make public the deal for scrutiny by international experts.

However, political parties, particularly the nationalist forces, continue to raise objections to the Reko Diq agreement and have lambasted the government for selling Balochistan’s assets at throwaway prices. Political observers are of the view that if both the federal and provincial governments fail to ensure Balochistan’s due share in the project, it would further deepen the sense of alienation even more. This could fuel a crisis in a province that is already riddled with troubles and wracked by insurgency and violence.