It’s about imagining a different South Asia, a “New South Asia,” to quote Selina Hossain and Radha Chakravarty, the editors of the two anthologies,Writing Feminism and Writing Freedom — the latest additions to the South Asian Voices series.

Both anthologies trace stories of oppression and suppression — be it at the hands of patriarchs, societies, cultural traditions or regimes. And in each one of them are embedded the stories and struggles of those individuals who find themselves in such situations and choose to swim against the tide. While both essentially present tales of struggle and strife,Writing Feminism is of a more personal nature and brings to the fore various domestic issues, whereasWriting Freedom tackles the ‘larger’ issues of war and politics — but from the point of view of individuals caught in the web. Identity, however, is a theme dealt with by both books.

While the aim of the anthologies is to imagine a new South Asia, there is little that they offer by way of solutions to existing problems. The anthologies are a canvas painted with the problems plaguing the region. The only story which attempts to break free of the shackles is ‘A New Title,’ in which a woman shoves her drunken husband when he attacks her and rewrites “the title of her story” which she completed just before the attack, symbolic of her decision to put an end to the daily domestic abuse faced by her. Otherwise, most of the stories are filled with doom and gloom and there is nothing liberating about them. Many of the stories also bear an uncanny relevance to life today, illustrating how little has changed over time.

“There is no one left now in all this world who has not lost some kith and kin through the bullet or steel blade or fire” — this sentence hits one like a bolt of lightning, and stands as true today as it did in the past. ‘My Forbidden Face’ speaks of the beginnings of the Taliban rule in Afghanistan, and how the regime changed the day-to-day lives of citizens — particularly women.

The contributions to the anthologies have been made from across the South Asian terrain — Nepal, Maldives, Bangladesh, India, Sri Lanka, Pakistan, Bhutan and Afghanistan. The books are largely a compilation of works translated not only from national languages such as Urdu, Hindi, Bengali or Nepali, but also Tamil, Punjabi, Malayalam, Kashmiri, Oriya, Telugu, Marathi and Kokoborok. And despite the fact that the stories emanate from very diverse indigenous cultures, they all emote very commonly ‘felt’ experiences, bringing forth the realisation that there are several shared experiences among individuals belonging to this region. 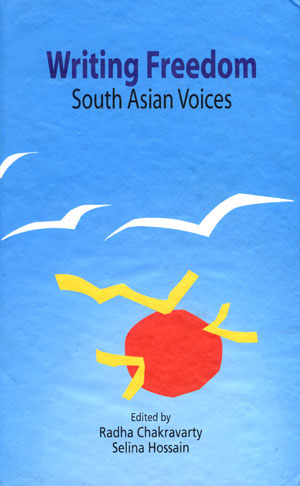 The anthologies also include works by Pakistani writers. Writing Feminism features the work of Zahida Hina, Rukhshana Sarwar (an Afghani who later migrated to Pakistan) and Bashir Ahmed Baloch, while Writing Freedom contains the very popular and recently staged play Burqavaganza by Shahid Nadeem, a poem (‘We Sinful Women’) by well-known author Kishwar Naheed, who has been at the forefront of the feminist movement in Urdu literature and whose works have been adapted for television. Other Pakistani contributors are Tauqir Chughtai, Rukhsana Ahmed, Ishrat Afreen and Alamgir Hashmi.

So while one wishes that more narratives included a liberating story, there are many reasons why books such as these are desperately needed.

They have immense social, cultural and historical worth. They document a point of view from history with the individual at the centre of the narrative. They are even more pertinent today when one reads about the deaths of soldiers and policemen and innocent youth on the streets of the cities, and the numerous lives that are lost in wars waged from within and without, but never hear it from the perspective of the people who have suffered the losses. One such story, ‘Maa,’ a gripping tale set in Bangladesh, is about a mother whose son is arrested and charged with being a member of a guerilla outfit. When she visits him in jail, he requests her to bring him some rice to eat. But this mother never hears of, nor sees, her son again. It is her tale — the tale of a mother who pines to see her son again, and who cannot allow herself the luxury of sleeping on the charpai when her son sleeps on the cold, hard floor of a jail cell. She cannot swallow morsels of food, especially not rice, because her son asked for it but never got to eat it. So for the next 14 years, until her own death, she continues to deny herself all that her son most likely was denied too.

The two books not only offer a wide selection of prose, poetry and drama, but the creative expressions are diverse too.

‘Hands,’ for example, is about a youth’s coming of age and the struggle against his father for the right to make his own decisions. What is particularly striking is the innovative manner in which the theme is presented: a dream sequence opens with the young man demanding his “hands” from his father. Written from the point of view of the father who is utterly confounded by his son’s unusual request, he watches, to his “utter amazement,” that when he hands over the keys of the cupboard to his wife, and when she unlocks it, he sees “a pair of hands … The severed ends revealed blood, still fresh, as if they had been recently cut … Seeing those severed hands, my son triumphantly laid the ends of his amputated arms on them. The hands and arms were instantly rejoined and restored to their original state.”

Writing Freedom and Writing Feminism are valuable contributions to the discourse on South Asia.