July 30, 2010, will forever remain etched in Tehmina’s memory — it was the day she permanently lost the use of her legs. The 12-year-old domestic servant was not the victim of an accident or a debilitating illness — she was the victim of torture by her employers. Her crime: requesting her masters to pay the salary due to her for the previous two months.

Tehmina and her teenaged sister from Rahim Yar Khan had been employed for a couple of months in a residence situated in an upscale sector of Islamabad. As long as they worked in keeping with their employers’ demands, all was fine. But when they requested leave to go home for Eid and asked for their salary, they incurred their employers’ wrath. The couple refused and began to beat Tehmina, doing so with such vehemence that she became unconscious. Fearing she was dead, they then threw her over the balcony of their house, in an attempt to make it appear as an attempted suicide.

Having heard her cries, Tehmina’s sister, meanwhile, went frantic looking for her. Finally, she located her lying in a heap on the driveway. She beseeched the couple to take her to the hospital. They refused. Eventually, garnering help from other sources, she was taken to the hospital, where the doctors informed Tehmina’s family who had gathered by then, that her backbone had been shatttered and she would never stand on her feet again.

It took Tehmina’s father 20 days to get an FIR registered with the police — and that too only due to the help of a non-governmental organisation. Tehmina’s employers had reportedly used their clout to hinder the process as long as possible. However, as it happened, they got away with near murder anyway. They offered Tehmina’s family an out-of-court settlement, one that her poverty-stricken father could not refuse.

This was not a one-of-a-kind case. The year 2010 has witnessed at least five cases where a minor domestic labourer has been beaten, tortured or murdered and the accused have not been charged. In one case, a young boy employed as a domestic helper was made to sit on a hot tawa (frying pan) and was badly burnt. In another, Shahzad, aged 13 from Gujranwala, employed in a doctor’s house, was found dead on the roof. He had been strangled and left there, allegedly by his employer or a member of this family. Then, in February, Yasmeen, a young domestic aide, was burnt by her employers and later succumbed to her injuries.

However, one of the most publicised case was that of Shazia Masih’s. Employed in the home of the former president of the Lahore Bar, Chaudhry Naeem, she was allegedly tortured and sexually abused by her employers. Shazia subsequently succumbed to her injuries. According to her family, Shazia had been recruited by an agent who found her employment at Chaudhry Naeem’s house. After her death, her mother registered an FIR, but eventually agreed to an out-of-court settlement. Ironically, when the case came to light, lawyers protested against the arrest of the accused, since it brought disrepute to their community.

According to UNICEF, one in six children aged 5-14 years (about 16% of all children in this age group) are employed as child labour in developing countries. In the least developed countries, 30% of all children are engaged in child labour. There are two main categories of work done by children: child work and child labour. Child work is when a child is employed in a home as a helper and his/her fundamental rights to education, healthcare and recreation are not compromised. Child labour is when a child is paid in kind or cash and in some cases not paid at all — and all his/her basic rights to development, survival, protection and participation are denied.

According to a national survey carried out in 1996 by the Federal Bureau of Statistics, 3.6 million children were working in Pakistan. The survey, however, left out a huge segment of children working on farms and in homes as unregistered or invisible labour. Fourteen years later, children makeup almost 48% of the population. Poverty scales have jumped and there is a dire and urgent need for a new and comprehensive survey of child labour in Pakistan. 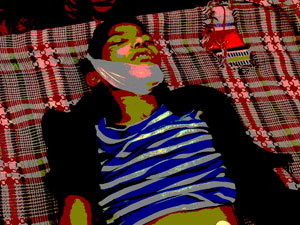 Child domestic work is considered one of the worst forms of child labour, but it is not part of the 34 occupations listed by the International Labour Organisation (ILO) in their manifesto, according to which children under 18 cannot be employed for various reasons, such as health risks, exploitation and sexual abuse. The worst aspect of domestic child labour is that it is invisible. Children as young as five years of age are working in homes where the employer determines the treatment meted out to them. Work hours usually start from dawn and end whenever the employers desire. Food is in the form of leftovers, clothes are hand-me-downs and time for recreation is nonexistent. There is a high risk of sexual, verbal, physical and emotional abuse, with no respite or any recourse to help. Wages are either paid to the parents or compensated for by provision of food and shelter. These are children whose parents are selling their childhood away for a pittance.

Apart from blatant abuse — both physical and sexual — cruelty also takes many other forms, not least of those psychological. Surely many of us have witnessed young child helpers tending to children not much younger than them, while watching their well-to-do employers enjoy a meal in a restaurant. These same child workers are forced to handle dangerous items such as knives, hot utensils and irons. And all this while being separated from their families and isolated from society at large.

No survey has been conducted to accurately gauge the number of children working in homes, but studies suggest that more girls than boys are employed as domestic helpers.

Ironically, the endless rantings of the righteous and the self-appointed custodians of morality notwithstanding, Pakistani society seems completely comfortable with the vice of domestic child labour: “Agar yeh kaam nahin karaingay to yeh becharay kahan say khaingay” (If we don’t give them work, how will the poor eat) is a common refrain. By this logic, children are understandably employees of choice because they are small, weak, harmless and easy to exploit.

Is there any light at the end of this tunnel?

There is certainly no simplistic solution, but there are ways to mitigate the evil. NGOs working on childrens’ rights have been demanding that child domestic labour should be banned altogether or child domestic work should be added to the list of the worst forms of child labour by the ILO. They contend that a system should be devised to register children working in homes, their welfare be monitored, and laws framed to regulate working hours and minimum wages and to protect the children’s basic rights to development, survival, protection and participation.

By law, the government is duty-bound to ensure that every child enjoys his/her basic rights as enshrined in the constitution, international instruments such as the United Nations Conventions on the Rights of the Child and the ILO conventions on minimum age of employment and the worst forms of child labour — documents that have been duly signed and ratified by Pakistan.

We have talked the talk long enough. Now it is time to walk the walk.