“Tale of the Tile: Ceramic Traditions of Pakistan,” at The Mohatta Palace Museum is a fascinating exploration of clay-working traditions in the Pakistani region, from pre-historic earthenware to present-day ceramics by contemporary artists. Organised chronologically, the exhibition’s didactic aims are evident in the succinct wall text that guides visitors, in English and Urdu, through centuries of Persian, Arab and Central Asian influences in the area. The objects are gleaned from several regional museums and set off by architectural facades emulating their original sites of installation. The exhibition speaks to the viewers through object, text, and ambience.

Spaced over seven galleries and two period rooms, the exhibition can be divided into three parts. The first attempts to recreate history, the second provides the stylistic parameters for unraveling that history, and the third features the art which discourses with history on its own terms. The first four galleries display bowls from Mehergarh, lattices from Hala, Thatta and Sehwan Sharif, lustre and faience tiles from the Shah Jahan Mosque in Lahore, and tiled facades from Sufi shrines in Uch, Multan and Lahore. A period room evoking a medieval Sufi retreat is housed appropriately in the fourth gallery, providing the contextual backdrop for the phenomenal blue tiles that cover the walls.

Having completed this circuit, one is led to the other period room, which houses a reproduction of the traditional mud kiln used by potters to fire their wares. This is followed by galleries devoted to the “grammar of the ornament,” composed of enlarged reproductions from an art historical text by Susan Stronge and an archaeological, documentary compilation by Henry Cousens. Having the ornamental program magnified facilitates the visitors’ transition to the contemporary work which employs these tropes in a different way. Mian Salahuddin’s work, for instance, in the next gallery, though modernist in its form, incorporates calligraphy as seen in the epigraphic decoration seen earlier on architecture and utensils. Although he opts for Urdu for his inscriptions, the Persianate Nastaliq of his lettering recalls a rich artistic and cultural interchange of the past. Finally the last gallery showcases the diverse array of experimentation seen in contemporary ceramics in Pakistan. A lot of these works fall into the category of ceramics only by virtue of their medium but bear no affinity to the functional, utilitarian object.

The significant absence of tiles in the contemporary section raises questions about the contemporary artist’s inspirational relationship to the past. In most cases the tile itself, as a form, and the symbolism of its decoration, does not find its way into the art work. Talat Ahmed’s relief is perhaps the only piece that references Mughal architecture and the lattices seen in the previous galleries. Because it is a representational work, it provides a concrete formal anchor to the work seen before. On the other hand, Munawwar Ali Syed’s Point of Vision, 2005, relies almost exclusively on Foucauldian ideas and is entirely divorced from tile and tradition. It’s inclusion in the exhibit serves to acknowledge the western strains of influence that have recently entered the Pakistani imagination.

One of the most interesting works is Riffat Alvi’s Conference of the Birds, 2003. It takes its cue from a literary work by the medieval Persian Sufi poet, Shaikh Fariduddin Attar, and its conceptual form from western art. The three-dimensional piece is a broken coop with flocks of birds perched on all four sides looking towards a heap of skulls in the centre of the pen. The work can be interpreted as a literal representation of Attar’s poem which deals with the quest for God and refers to death as the ultimate culmination of the Sufi’s desire for unison with the Almighty. In the current context however, it also begins to comment on the death of tradition and poses existential questions for the Pakistani artist in particular. Who is the artist to look to? What validates her/his work as art? What makes the work Pakistani? 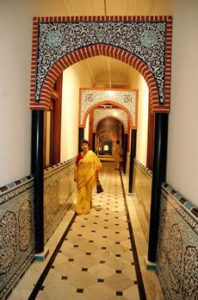 This exhibition is not a valourization of the craftsman’s trade as the title, Tale of the Tile, appears to suggest, nor does it trace the historical progression of tile-making techniques. Although the traditional mud kiln is incorporated into the show, it does not bring to light the work of the potters who rely on it for their daily livelihood. Yet its inclusion is imperative because the contemporary ceramist too, must work with the same technology as the artisan. In that sense, once again the show becomes more about the contemporary art form, rather than historical traditions. The Tale of the Tile is pertinent only as far as it lends itself to the explanation of the new work. It is difficult to explain why then, the contemporary section is assigned the smallest gallery and the works are installed in such close proximity to each other that appreciating them individually is inhibited. The contemporary gallery has virtually no wall text to facilitate the stylistic and conceptual connections for the untrained eye, which could have also have been achieved through thematic juxtapositions rather than chronological ones.

From the point of view of exhibition planning however, it must be acknowledged that speaking to the Pakistani audience is a challenging task because of the sheer range of levels of visual literacy, even among the educated. At this point, the thrust of museum education has to be towards luring the audience to the museum before linear narrative can be forsaken. Although the past and present are not tailored very cohesively in this exhibition, it achieves both its aims of making the visitor aware of an artistic lineage and introducing the novice to contemporary ceramists and their work. The Tale of the Tile is another significant milestone in raising the bar of art literacy and appreciation in Pakistan.