Pakistan faced yet another embarrassing moment on the revered night of 27th Ramzan. Tehreek-e-Taliban Pakistan (TTP)-backed suicide bombers attacked the Kamra Airbase and battled the military for over five hours before they were out manoeuvred. The international media immediately conjectured that the Kamra Base also served as a storage facility for Pakistan’s nuclear assets — an allegation that was subsequently denied by air force authorities. But the incident served as a timely reminder of the fact that militants are gaining ground in Pakistan and that the Pakistani state is unable to prevent attacks on its security installations.Additionally, it brought several issues to the fore. For one, the attacks on the Kamra Base, the Mehran Base last year and on the GHQ before that are not attacks on soft targets. The fact that key security installations were targeted is indicative of a larger complexity that is brewing in the polity of Pakistan. Related, but equally important, are issues of intelligence failure and internal compliance.

The turn-around that the Musharraf regime announced for sheer survival never entirely happened on the ground. However, it created a lot of confusion, opaqueness of policy and had the so-called strategic assets of Pakistan turning against it. These by-products of Pakistan’s tunnel-visioned operational strategic games have become a huge liability for the state of Pakistan today. The foremost reason for this is that not everybody is ready to forgo their utility. The old guard, for instance, can’t get over the nostalgia of their achievements against the Soviets. They seem to forget that the dynamics have completely changed; it’s a different world now. This is especially true for Pakistan because of the dichotomy of choices it made, which included becoming a front-line ally of the United States, while at the same time not letting go of the past. The government of Pakistan functions today under American searchlights and what was promoted, accepted and later tolerated is not even an option today.

The last decade for Pakistan, amongst other things, has also been a lost decade in terms of security gains. According to the Pakistan Economic Survey 2010-11, 3,500 Pakistani soldiers were killed, 8,671 soldiers were wounded and 35,000 civilians died in terror attacks across the country. There were 3,486 bomb blasts and 283 major suicide attacks. More than 3.5 million people were displaced while the country lost USD 68 billion in revenue due to terrorism. The situation has particularly deteriorated since 2006 and terrorist activities have spread into the settled areas of the country. The situation in the country has also affected the country’s exports, prevented foreign investment, hampered the privatisation programme and slowed down overall economic activity.

The intellectual elite, policy makers, media anchors and the public are confused about the issue of the war on terror. The question about whose war it is, still stands unanswered. The view projected by some is that all of this has happened because Pakistan became a strategic partner in the war on terror. While the reality is that Pakistan did not have a choice after 9/11, the situation now clearly points to home-grown terrorism. The negation of this fact is an exercise in stupidity. Furthermore, to assume that it will disappear overnight, if we disengage from the war, is equally senseless.

I refer to this period as the lost decade because it is not just Pakistan’s internal security that faces a dire threat, but the writ of the Pakistani state is challenged everyday from the streets of Karachi, to the heart of Lahore, all the way to our tribal belt. Jihadi groups have proliferated to the urban centres of the country and are no longer a peripheral phenomenon. The sectarian, ethnic, political, criminal and daily law and order situation in Pakistan today appears to have its links to the extremist paradigm. 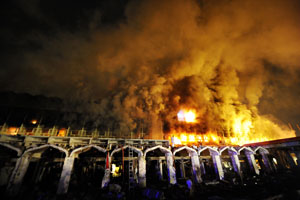 The flawed notion of strategic depth stands rejected by all in Pakistan and what the country actually faces is strategic vulnerability which could lead to strategic defeat in Afghanistan. It is important to remind policy-makers that the transition from a flawed policy of strategic depth to a likely strategic defeat must be prevented. This is only possible if the policy-making elite of Pakistan develop a vision which goes beyond the operation on the ground, where long term political and regional geo-strategic objectives are factored into the policy, and which focuses on an implicit understanding that the use of soft power is perhaps far more effective than hard power.

In essence, Pakistan must revisit and re-evaluate its geo-strategic objectives at a domestic, regional and global level. The last decade of the war on terror has turned Pakistan into a country that is divided within and doubted abroad. Some of its long-standing friends and strategic allies view Pakistan’s policies with scepticism and constantly regard Islamabad’s intent with suspicion. The Washington-Islamabad nexus has grown weaker over the years. But the nexus that has grown stronger, at Pakistan’s expense, is the one between New Delhi and Washington — this may actually factor into the strategic defeat referred to earlier. But the bigger concern is that if Pakistan does not play its cards right the Beijing-Islamabad nexus may also get affected since China is also eyeing a role for itself in Afghanistan. It is improving its trade ties with India and both countries have agreed upon a new USD 100 billion bilateral trade target by 2015, up from USD 60 billion in 2010. China also does not subscribe to confrontational diplomacy with Washington or any other state for that matter and it is possible that China is asking Pakistan to do exactly what Washington is demanding of us. The only difference is that these interventions are being conducted quietly behind closed doors. In fact, for the first time Washington has requested Beijing to ask Pakistan to reverse state patronage of extremists and their networks.

A more pragmatic approach is needed where US excesses and mistakes in dealing with Afghanistan and Pakistan must be highlighted and opposed, but at the same time Pakistan should be able to convince the international community of its complete commitment to eradicate homegrown terrorism. Some of us are still in a state of denial and therefore, our story does not sell. Afghanistan can emerge as a zone of co-operation rather than conflict and contest. The peace dividends for Pakistan as well as for the entire international community could be incredible.

This article was originally published in the September issue as part of the cover story on how militant groups have infiltrated the army.

Related Article: Jihadis in the Ranks