Do you want a medicine, any medicine, without a doctor’s prescription? Easy! They are all there, in Pakistan’s pharmaceutical market and, shockingly, tranquillisers rank highly as some of the most popular products among consumers.

This is quite understandable, given that Pakistanis live in a constant pressure cooker of political turmoil while juggling a thousand other tensions. Some of the general causes for stress cited by psychiatrists include: unending political turmoil, social stressors and stigmas, ineffective governance, corruption, poverty, financial worries, family conflicts and an absence of responsibility. Add to that, the lack of a proper education system and resources, dishonest leadership, social injustice, discrimination, unemployment, very little social cohesion and the near-absence of human rights. These factors contribute to the high stress toll on the country’s population, and thereby to high levels of depression.

Continuous worries tempt large numbers of people to seek recourse in tranquillisers without first consulting a medical expert. Most psychiatrists are very careful about prescribing tranquillisers and they prescribe fewer addictive compounds as compared to general physicians (GP). On a patient’s first visit a GP, at best, may advise an anti-depressant plus a tranquilliser. The next time, the patient might not bother to visit the doctor and will go straight to the chemist to get some more of those ‘miracle’ pills. Then, of course, there are the quacks who add fuel to the fire. Psychiatrist Dr Haroon Ahmed suspects they probably outnumber registered doctors and explains that it’s a situation tailor-made for the easy popping of tranquillisers, generally known as sleeping pills or “tension kam karne wali dawa.” The unhindered sale of tranquillisers is cause for serious concern, especially among the medical community. “They’re sold freely because there’s no effective regulatory authority. The systems are there, but they’re not working efficiently. Globally these are very controlled medicines, but here the situation is the opposite,” says Dr Mukesh Bhamani of the AKU.

A study conducted at a local hospital from 2002 to 2006 (AKU, Department of Medicine, Drs Mohammed Patel, Mohammed Shahid, published by the Journal of the Pakistan Medical Association, Vol.58, No.6, June 2008), highlights the situation: 320 patients were admitted for drug overdose; virtually all were suicidal. Without going into the technical details, it was, nevertheless, alarming to note that their mean age was 36 years — a period that should spell the most productive years of their lives. There were more women patients (59%), predominantly housewives comprising 36%, and students 20%; 56% of the patients were married, 81% needed in-patient psychiatric services, but a significantly high number refused treatment, presumably because psychiatric illnesses are still taboo. Another category described in the study were those who accidently overdosed themselves; they were generally older men, around 45 years old, frequently single.

The study concludes that doctors consider the high number of accidental overdose patients quite alarming. Sometimes problems are caused by patient-drug, or drug-drug interactions — the most commonly incriminated drugs are benzodiazepines, followed by opiates and antiepileptics. A fact that appears repeatedly is the high degree of depression in women; they are considered to be most at risk of Deliberate Self Harm (DSH). Domestic and social issues are rated as root causes of depression. Students run a close second, especially those with underlying depression.

According to studies carried out at the AKU, the incidence of depression is 34% (Mirza and Jenkins, BMJ, 2004). A study by the Pakistan Association of Mental Health (PAMH), conducted in the Islamabad-Rawalpindi region, yielded similar results — the incidence of depression was 36% in men and 45% in women. Further, a survey conducted by the PAMH in low-income Karachi localities found that virtually every fifth house had a family member using benzodiazepine; of 150 such homes, every fourth household had someone suffering from a stress-related disorder.

Nevertheless, it cannot be computed from these studies that the incidence of depression in Pakistani is shockingly high. Dr Murad Moosa (Head, Dept. of Psychiatry, AKU) prefers to take a conservative estimate of 20%, which still appears to be at the higher end of the global range. The WHO estimates that worldwide there are 15% to 20% cases of depression. 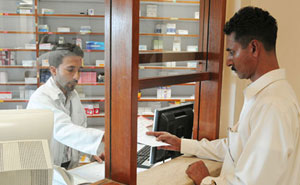 Suicide is also a major cause of concern — the WHO estimates that for every suicide, there are at least 10 to 20 DSH acts. A seven-year study, from 1997 to 2005 of all autopsies for suicide in Karachi gave an average of 198.5 suicides per year. By this estimate, there should be 2000 to 4000 cases of DSH in Karachi annually — and that is probably only the tip of the iceberg. It is also a matter of concern that attempted suicide, essentially a cry for help, is still considered a crime on the statute books. This dates back to the British Criminal Procedure Code, from which Pakistani law is inherited.

Cultural differences also have a strong bearing on general patient behaviour as well as the motivation behind suicides. Asian contexts emphasise cultural patterns and stressors that lead to suicide, in comparison to western literature, which typically attributes 90% of suicides to mental disorders. Findings in Pakistan emphasise social stressors as cause for suicide; these include financial worries, family conflicts, spouses’ illicit relationships, serious illness, frustrated teenage romance and mental turmoil. The range of culturally and socially distinctive family problems, typically involving spouses, in-laws, parent-child conflicts, and unfulfilled expectations is huge. By far the commonest are domestic and social issues, especially those affecting young married women. Previously, psychiatric history did not have much bearing on individual cases, but the vast majority of the patients are usually suffering from depression at the time of admission.

The ready availability of tranquillisers exacerbates the risks of misuse since there is a huge variety available at prices to suit all pockets. For instance, 84 brands of benzodiazepines are marketed, with slightly differing formulations, varying in price from just 0.70 paisas to Rs 7 per tablet. (PAMH data)

The question of foremost importance is that knowing the risk and danger these medicines pose, why have the authorities permitted their open sale? According to a well-known pharmaceutical distributor who does not wish to be named, “There are drug inspectors whose job it is to ensure that over-the-counter sale of such products doesn’t take place, but either they’re inefficient, or inadequate. Either way, it results in ineffective drug control.”

But given that, in 2007, there were only 478 drug inspectors in the country, it is difficult to say if a strict watch can be maintained. The drug inspectors function without offices, transport facilities, security protection or the staff required for surprise raids. It is no wonder, then, that the lack of emoluments and facilities tempts them to corruption.

In February 2012, a long awaited ordinance was issued to establish a centralised regulatory body of the pharmaceutical industry. At that point, the information was unconfirmed, and no further reports have emerged to confirm that this body is now functioning, The primary tasks of this body would include the control of drug pricing, quality assurance, import/export licenses to drug manufacturers and ‘other details’ — including the maintenance of a strict watch on the sale of medicines. But so far, that strong control on tranquilliser sales has yet to be put in place.

Of several chemists’ and druggists’ outlets surveyed for the purpose of this reasearch, only two appeared to be aware of the need for strict control on the sale of tranquillisers. (Famy and Kausar Medico in Clifton, Karachi). While one chemist has a prominent notice in place stating that no tranquillisers would be sold without a doctor’s prescription, the other tries to control misuse by asking for doctor’s prescription before providing the tranquilliser. The staff at the chemist outlets say that Benzodiazepines are the most frequently asked-for product — Lexotonil and Xanax are the preferred brands. The pharmacists estimate that everyday approximately 20% of the customers asked for tranquilisers.

Given the general state of affairs, there is little likelihood that this situation will improve any time soon. There is a need for greater awareness among the general public. Dr Haroon Ahmed is worried that the uncontrolled sale of tranquillisers can lead to a worsened impact on individuals already reeling from stress. Beyond the immediate medical view is the overwhelming injustice and suffocation in Pakistani society. The socio-economic disparities, with obscene wealth on the one hand and abject poverty on the other, are bound to create resentment. There is also widespread politically engendered violence and gender discrimination, and discontent, which takes a heavy toll on people’s emotions and mental status. No amount of ‘soft imaging’ can succeed in overcoming the negatives, unless concerted efforts are made to change this existing state of affairs. Of particular concern is the growing depression in young married women, for if they are to be equal contributors to society, then the factors that contribute to their depression also need deeper analysis.

Stakeholders and medical practitioners need to chart out a future plan of action to identify the causes that contribute to society’s well-being, and to change the public mind-set. Simultaneously, the open sale of medications must be regularised, before more lives are destroyed.

This article was originally published in the September issue of Newsline.