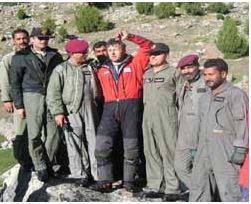 It was a scene out of a “Mission Impossible” film. Pakistan army aviation helicopters flew on a daring mission to rescue Slovenian mountaineer Tomaz Humar, who was trapped in a one-metre ice hole in the steep rock-wall of Nanga Parbat, the Killer Mountain in the Himalayas. It was every mountaineer’s worst nightmare and Humar had all but given up hope after spending 10 days holed up in an ice-hole, pinned down by continous snow and rain, down to his last tank of gas, with his clothes frozen on to his body.

Monday, August 1, 3 pm: Humar had started soloing the Rupal Face following a similar line to the one climbed by Steve House and Bruce Miller last summer, to the right of the original Messner route on the gigantic rock-wall of Nanga Parbat. He spent that night suffering in a make-shift bivouac, at about 18,700 feet.

Tuesday, August 2: Humar climbed another 1800 feet and ran into trouble. Given the relatively warm temperatures, ice conditions were very poor, with frequent rock fall and small avalanches. After an unsuccessful attempt to climb further, Humar tried to change direction, but could not find an escape route.

Wednesday, August 3: Humar returned to his make-shift bivouac and spent another night there, before climbing down to a safer location at around 19,400 feet. There he remained for six nights, pinned atop a small snow arÃªte, trying desperately to stay dry in the continuous spindrift.

Thursday, August 4: Tomaz transmitted May Day messages to the base camp, the president of the Alpine Club of Pakistan, Nazir Sabir, and to the Foreign Office back home that he was trapped in an icy hole on the steep rock-wall. After receiving Humar’s SOS message, the Slovenian Foreign Minister phoned his Pakistani counterpart, Khurshid Mahmood Kasuri, who had already been informed by the president of the Alpine Club of Pakistan about the incident. Kasuri immediately contacted the Pakistan army aviation authorities to undertake the rescue operation because of their expertise in such operations in the high altitudes of the Himalayas.

Friday, August 5: Kasuri also spoke to the Interior Minister, Mr. Aftab Ahmed Khan Sherpao, requesting him to facilitate the arrival of a foreign team of helicopters and pilots. The government of Slovenia were planning to fly in a Swiss crew known for mountain rescue operations.

Saturday, August 6: Two Lama and one MI-17 army aviation helicopters landed near the base camp at Nanga Parbat. They flew around the mountain to observe the situation but due to heavy fog and avalanches, they could not reconnoitre the area where Tomaz Humar was trapped.

Sunday, August 7: Attempts to rescue Humar continued. The helicopter that flew to Astore on Saturday August 6 made two attempts on Sunday to fly a reconnaisance mission in the area again and managed to come within 40 metres of Humar in treacherous high-wind conditions, but mist and clouds forced them to abandon the mission. The heli-flight however, succeeded in filming the climber’s location for future efforts. Meanwhile, weather conditions on Nanga Parbat, according to base camp reports, continued to remain bad. It began snowing at 10 p.m. followed by a heavy downpour of rain. 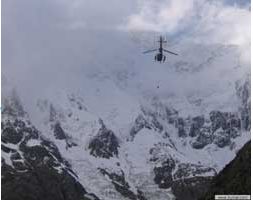 It had already started raining when Tomaz called his colleagues at the Base Camp around 8.30 am and said: “My fifth night in this icy trap has become unbearable. If this weather continues, I won’t be able to hold on for much longer, this is not even a bivouac anymore, there is no shelter and the rain is pouring all over me. Everything is freezing.”

It was -5 degrees centigrade in his sleeping bag. To keep himself warm, Humar tried to move around as much as was possible within the one-metre icy hole. He had been fighting the snow all night which had narrowed down his living space. His doctor at the base camp, Ms. Anda, advised him to keep drinking as much warm fluids as possible otherwise dehydration would accelerate frostbite. But, Humar told them that it was difficult to cook in the small space he was in, and his gas supply was running low as he was down to the last tank.

Monday, August 8: The weather remained windy and cloudy, with low visibility, making it impossible for any further rescue attempts. And Humar remained trapped on the Rupal face for the sixth consecutive day.

Humar asked about the weather forecasts and if there was any hope of some improvement. He was told that the clouds were already breaking over the base camp and the view of the mountain was gradually getting clear, while visibility was about 4500 metres. Tomaz was told that the forecast was promising; it might stabilize early the next morning, or on Wednesday or Thursday at the very latest.

On the other hand, everyone at the base camp and those who were responsible for the rescue operation, knew that they would have only four hours, from 4-8 am, to rescue Humar, whenever they got a patch of clear weather. A Lama helicopter was on standby with two of the most experienced Pakistani pilots, Lt. Col. Rashid and Maj. Khalid, waiting for a crucial break in weather conditions.

Tuesday, August 9: It was still bad weather over the glacial valley basin and the mountain. It was drizzling at the base camp, but up where Humar was, it was still snowing. Unfortunately, apart from the occasional, short dry spell, it had been snowing continuously for the last six days.

Once again, Tomaz messaged his colleagues at the base camp and asked, “What’s wrong with the rescue operation? I am soaking wet and my clothes keep freezing on my body. Why are the helicopters not at base camp yet?” He was reassured that two Lama helicopters and one MI-17, were on standby, at nearby Jaglote, 30 km from Gilgit.

As soon as the weather improved, the 3 helicopters arrived at the base camp. In the afternoon, at about 3:30 pm, Humar informed the base camp that there was a clearing just over his position and that he could see the ridge to the left of him, that it had stopped snowing and that the wind had died down. The crew ran to the helicopters — a few last agreements of what signs to use were made — the most important one: a thumbs-up by Humar.

And then they took off, one by one within a five minute gap. Visibility on the upper part of the mountain face was slowly opening up, though from the right a new cloud had covered the mountain. Fortunately, the pilots were able to make contact with Humar, but when the Lamas reached him, the fog had set in, obstructing their line of vision.

The pilots tried to approach the wall at about 6000 metres, but then decided to postpone the rescue till dawn on Wednesday. Nevertheless Tuesday’s attempt proved that communication between Humar and the pilots could be established, and the pilots got the opportunity to inspect the terrain and location. So everything was ready for Wednesday’s renewed attempt — providing the weather stayed clear.

On Tuesday night, keeping in view, the improving weather conditions, the Pakistan army aviation officers took the decision to launch another rescue attempt at dawn the next morning even if the mountain face remained covered with cloud.

Wednesday, August 10, 5 am: The Lama helicopters took off for Nanga Parbat to rescue Humar in spite of unclear weather. It was, perhaps the Pakistan army aviation’s most risky rescue operation to date.

The helicopter, piloted by Lt. Col. Ubaid and Maj. Naeem, attempted to approach Humar, flying perilously close to the ice wall, but could not position in on Humar who was wearing red mountain-gear. They gave way to the other hovering helicopter, piloted by Lt. Col. Rashidullah and Maj Khalid, who flew their chopper so close to the mountain wall that the blades barely escaped collision. They managed to hover and lower their helicopter within metres of Humar, who was waiting, tied to two ice screws with a loose knot so he would not stagger while trying to catch the weights on the helicopter rope. The helicopter approached him and dropped the rope. Humar caught it, clipped it onto himself, gave the thumbs-up signal and the helicopter lifted off. But the rescue took yet another dramatic turn. Humar had not managed to free himself from the rope anchoring him to the mountain. Fortunately, as the helicopter pulled up, the rope broke and a disaster was averted.

In one of the most hair-raising rescues ever attempted, the Lama helicopter with Humar hanging on the rope, under the helicopter’s belly descended for another 15 minutes before appearing at the 3500 metre-high base camp where his cheering team-mates were waiting. Humar finally kissed terra firma at 6:30 am, Wednesday, August 8. He had escaped the icy jaws of death.

Actually, Humar fell on his knees since he could barely walk from exhaustion. It was an emotional moment. Humar broke down and hugged everyone around him, continuously thanking the pilots who had saved his life. His teammates immediately changed him out of his wet clothes and footwear, as his feet were at severe risk from frost-bite. Team doctor, Ms. Anda, pronounced Humar healthy, except for swollen and slight frostbitten feet. He decided to remain at the base camp to rest and recover from his ordeal.

The Lama helicopter crew said that they only had two minutes of fuel left as they touched down. It had been a close call. If the rescue operation had taken a few minutes more, it would have been disaster. This was the most difficult rescue operation in the history of the Pakistan army aviation and world mountaineering.

Tomaz Humar, speaking later on satellite telephone from the base camp, paid the highest of tributes to the daring Pakistan army pilots who rescued him. He also thanked Foreign Minister Mr Khurshid Mahmood Kasuri, the government of Pakistan and the Pakistan army for taking such a personal interest in saving his life. “The Pakistan army helicopter pilots seemed to work magic and the coordination of the entire rescue was absolutely outstanding,” said Humar. “No Hollywood film could go anywhere near what these men did on the deadly Rupal Face today, for which I congratulate them. They make you feel proud to be a Pakistani.”

Before leaving for Slovenia, Tomaz Humar also met with the President and Prime Minister of Pakistan to thank the government and the Pakistan army for risking their lives to save his. He also requested them to grant him permission to open a small hospital for the people living near the base camp of Nanga Parbat as a gesture of goodwill.

This daring rescue operation earned the Pakistan government and the Pakistan army aviation unparalled admiration internationally and will go down as a golden chapter in mountaineering history.