Erum Afsar remembers the time when she could pray in the main hall at the Regina Islamic Centre in Canada. Then, a conservative contingent in the community began inviting Islamic scholars from countries like Saudi Arabia to deliver sermons. “With that the conflict began. One day women could pray in the main hall, the next day they were asked to move to the balcony,” Afsar explains.

When the women refused to budge, a television appeared in the balcony and the prayers were piped into the prayer space. At one mosque that Afsar went to, the imam forgot to turn on the speakers.

“We just sat there, waiting, with no idea when the prayer began. It was a mess, children were crying, women were chatting,” says Afsar, who found the arrangement humiliating. “Praying at the mosque is all about feeling a sense of community, and if you are separated, how do you feel it?”

Afsar, her mother and a few family friends decided to take back the mosque. “We demanded proof that women could not pray in the space as men do and [mosque leaders] couldn’t come up with it.”

Then the curtains went up. The women would yank them aside, or sit in front of them when there was space. One day, Afsar showed up to find the curtains were fixed onto the rod so that they couldn’t be pulled aside. “Then the more conservative members of the mosque got their wives to sit behind the curtain and we became the targets of ridicule and insults.”

When liberal male members, like Afsar’s father, attempted to speak up against gender apartheid, they were derided and told they were not Muslim. Furious at the exclusion, Afsar challenged mosque leaders. She compiled opinions from scholars around the Muslim world supporting their stance, to counter the religious arguments the imam used. “At one point, the discussion got really ridiculous: we were told our presence was disturbing for men and that it would ruin their prayer.” Some mosque leaders insist a woman creates fitna, or chaos, by her mere presence when she prays in the company of men.

“It may seem odd, but the idea is the act of prayer acquires deep sexual overtones because of the women present and a man’s prayer, his ticket to heaven, is wasted,” says Canadian activist Tarek Fatah. “He has gone through all this effort to get to the mosque and pray; he wants to make sure nothing gets in the way of a return on his investment.”

The theory of women as temptation is an ancient one in Wahhabi circles of Islam and in early Christianity, but segregation in mosques is a relatively new phenomenon. Edip Yuksel, an Islamic scholar who published a reformist translation of the Quran, said: “There is no basis in the Quran for forbidding women from praying freely in a congregation, but it is easy to distort the teachings by using the hadith [teachings of the Prophet (PBUH)]. It is unacceptable.”

He says he rejects the hijacking of Islam by “clergymen who impose cumbersome practices to keep themselves in power. They use the hadith to justify their actions, but the hadith were gathered 200 years after the Prophet’s (PBUH) death,” says Yuksel. “They are not only inaccurately reported but are entirely contradictory.”

Winnipeg-based social worker, Shahina Siddiqui, remembers when mosques were entirely unsegregated, back in the ’70s. “Then curtains started to go up between men and women and soon after, in the ’80s, mosques were built to separate the sexes,” she says.

One activist explains: “Imported imams are the issue. Some of them come here from Muslim countries at the age of maturity and import their ideas with them, which are completely irrelevant to democratic or Canadian society. The removal of women from the main prayer area is their innovation and it is not the first effort in history by men to control women.”

Another factor that contributed to the phenomenon was the source of funding for mosques. When Muslim Canadians went about building mosques, Saudi institutions stepped up with cash and with the funding came the hardlined tint of Wahhabi Islam. Its aggressive colour began to seep into the sermons and the prayer space set up.

Fatah has been watching the phenomenon with dread. “The Wahhabi version of Islam is dangerous because it reduces the role of a woman to that of a supporting one,” he says. “The woman becomes a sexual object, a mere distraction from the pious act of prayer and so must be removed from [the men’s] presence.”

But some mosques in Calgary and Edmonton have allowed activists like Siddiqui to preach against sexism straight from the pulpit. Siddiqui was first confronted by the effects of gender apartheid 20 years ago, while walking over to drop cash into the nation box at her local mosque. She had to cross the main prayer hall where men customarily performed their prayers. “Haram,” warned a boy, no older than eight. Siddiqui was puzzled at the audacity of the child, telling her, his Sunday school teacher, that her presence was ‘unlawful.’

But it was then that she realised an entire generation was growing up convinced that women had no place in the domain of the mosque and that these lessons would have to be unlearned. “It started as a separation of the sexes but now it has resulted in the removal of women not just from the prayer space, but in women becoming distanced from the decision-making process, and they have no say in issues that affect them,” she says. “It is a case of out of sight, out of mind.”

Siddiqui is part of a “movement of a few dozen Muslim women activists” working for change, quietly from within the community, linked by listserves and university conferences they use to present ideas and propose solutions to what they see as a crisis in the Muslim community.

One paper that Siddiqui presented has been turned into a booklet detailing the ways in which imams can make the mosque more inclusive for women. “The issue is not helping women participate, it is convincing these imams to recognise the humanity of women,” says Fatah, who often finds himself stonewalled when he asks why women cannot pray with men.

Fatah welcomes the idea of reform within the religion, but is sceptical about the reform movement within established mosques. “Reform is such a clichÃ©d word. What we need right now is protest, women picketing the mosque, demanding their rights, insisting on being heard and seen,” he says. For his part, Fatah tries to avoid praying at establishments where women are banned from using the main prayer hall: “I wouldn’t patronise a restaurant that doesn’t allow black people to dine, so why would I go to a place that bans women or treats them as second-class citizens?” 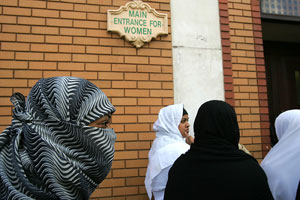 Separate from the truth: Gender segregation in mosques does not stem from Quranic teachings, say scholars. Photo: AFP

One idea that there is absolute consensus over in the Muslim community is that the Prophet Mohammed (PBUH) would have approved of women taking on a leadership role. Muslim women are holding onto the precedent the Prophet set, hoping to repel restrictions on their right to pray and participate in the mosque.

Islamic scholar Yuksel has held regular mixed congregation prayers. “Women lead the circle more often than not,” he says, who is slightly perplexed that, in his experience, younger women in the congregation have had a harder time taking the lead. “My own wife, a dietician raised in the US, is shy to lead prayers. They are culturally conditioned to accept male dominance.”

Only one man among the 15 or 20 Muslims who gather to pray the Juma (Friday) prayer had some trouble accepting the idea of following a woman in prayer. And he shows his dissent by volunteering his male friends to lead prayers, rather than by refusing to follow a woman.

Although there are no statistics available, Muslim organisations say there is one mosque they are aware of where prayers are ‘mixed.’ Progressive imams refer to it in hushed voices as an “experimental prayer format” at a prayer space in the Don Mills area of Toronto, at the Noor Centre, where people stand oblivious to each other’s gender, certain that their prayer is valid in the presence of members of the opposite sex.


Related articles from the January 2010 issue.