Deep inside Pakistan’s turbulent political waters, yet another major fight is building up, threatening to expend national energies in an epic showdown between the country’s largest political party and a strong-minded, resurgent judiciary.

If there was any doubt that this fight could be postponed, leading to a more sober acceptance of the pressing national need for mutual accommodation, these were removed last month. On December 27, President Asif Ali Zardari used the second anniversary of Benazir Bhutto’s assasination to make a speech that was akin to blaring the bugles of war.

Using fighting rhetoric, he painted himself in the tradition of political martyrdom that now seems to characterise PPP’s core philosophy. He spoke of conspiracies, both big and small, foreign and domestic, against democracy. He narrated the tale of his party’s woes, listed its many achievements and told the ‘invisible’ forces that he would fight to the bitter end.

His spokesperson, Farhatullah Babar, has since said dozens of times that the president was not “attacking anyone.” “Don’t read the speech as if it were a constitutional clause. This was an occasion that he used to address the workers. Nothing more, nothing less,” he said about the presidential outpouring. But he admitted that the speech was “well thought out” and “even though he [the president] did not speak from a written text, he had points that he had to touch on.”

Official sources confirm that PEMRA, the official body tasked to regulate a burgeoning media market, was pressed into service to ensure that the speech was broadcast on every Pakistani channel. That is where the problem lies. The president’s address last month was deliberate, each word well-considered and its targets well-selected. No wonder then that the speech is seen as the PPP’s bottom line in national politics, i.e. the party will not take an assault on the presidency lying down and unlike the past, would shake the very foundation of this country in the eventuality of a forced ouster from power.

It was this kind of a stand that the country’s military establishment did not want the president to encourage. Pakistan’s Chief of Army Staff, General Ashfaq Parvez Kayani, had hurriedly arranged an appointment with the president on December 23 to calm his nerves. Sources close to the presidency claim that the two had a “fairly open discussion about the theories being discussed about the immediate fall of the president from power.” These sources claim that there was a “general agreement that unnecessary controversy would be avoided in the best national interest.” Another source privy to these discussions said that the army chief specifically talked about the “disturbing statements coming out of the PPP quarters.”

This was a reference to a string of remarks by Raja Riaz, a senior provincial leader, Salmaan Taseer, the Punjab governor, and reports of a speech Khurshid Shah, a federal minister from Sukkur, made at a party meeting in Islamabad. All these remarks hinted at either bloodshed or unraveling of the federation in case President Asif Ali Zardari’s rule is threatened.

“The PPP is a federal party and this is its strength. It will not help itself if it were to reduce itself to the level of a provincial party,” General Kayani reportedly told the president, according to one well-informed source. General Kayani had a similar meeting with Prime Minister Yousuf Raza Gillani the same day. Prime ministerial sources have told Newsline that it was in this meeting that the Gilani agreed to immediately call a press conference and send the message out that the raging theories about an imminent political change were only gossip. 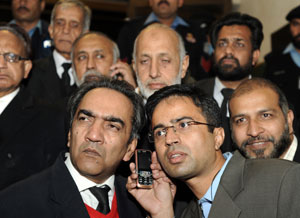 The prime minister delivered the message in the presence of dozens of journalists at a press conference broadcast in its entirety by state-owned television. He rubbished the idea of any conspiracy and was emphatic in saying that the judiciary, the army and the government were all on the same page. But clearly, the president had another plan of action. Some media reports claim that he was advised by his close Sindhi friends and the Punjab governor not to whitewash what the PPP believes is an attempt to oust the president from power.

Presidential sources do not confirm whether President Zardari gave a commitment to the chief of army staff about a moratorium on sensational statements. “He is the president of Pakistan, the highest office holder. He is not answerable to anyone, least of all to the chief of army staff, who has no political role to play,” says a close aide of the president. The same source also denied that the president is being “led” or “misled” by his advisers. “He is his own man and he knows his politics better than anyone else,” said the source.

If this is an accurate description of President Zardari’s political compass, then what he says and writes under his own name becomes even more important. In an article in The Wall Street Journal titled, “Democracy is the Greatest Revenge,” President Zardari poured his inner fears out: “The forces in Pakistan that have resisted change, modernity and democracy for 30 years still attempt to derail progress. Some of these forces who were allied with dictatorship in the past now hope that the judicial process can undo the will of a democratic electorate and destabilise the country … A litany of ancient charges of corruption … the modus operandi of past plots against every democratically elected government in Pakistan … now threatens to undermine the legitimacy of our government …”

The president’s views were laced with references to lofty ideals of democracy, the rule of law and the sacrifices his in-laws rendered for these causes. But more than that, this write-up is in line with the privately expressed belief, now completely entrenched in the presidency, that the army, the judiciary, and part of the media are hand-in-glove against the person of Asif Ali Zardari. At one level this neurotic obsession with dark and murky conspiracies against the government has little factual basis. Only two sitting ministers have been affected by recent court rulings. In total, a little over dozen PPP leaders are in the dock after these decisions the president refers to in his article. The case that the whole “system is being derailed” is weak. But still the president makes this case at every forum. His close chums, like Dr Zulfikar Mirza, the Sindh home minister, have openly stated that on the eve of the killing of Ms Bhutto, he had plans to break up the country, but it was President Zardari’s sagacity that prevented him and his close associates from moving in this direction.

This causes the greatest worry in the country’s military circles, which see little reward for the effort of the past two years to keep the institution focused on matters of national security, and away from the dust and heat of politics. The worry primarily stems from the anticipation that the Supreme Court of Pakistan would soon take up the issue of President Zardari’s qualification to hold office. Military sources who spoke to Newsline on condition of anonymity admit to “closely watching these issues of immense national importance.”

If the judiciary decides that President Zardari is an accused in the light of the judgment last month that knocked out legal protection to a select group couched in the infamous National Reconciliation Order, some in the PPP would try to actualise their dire warnings of hurting the federation. In such an event, circumstances might force the army’s circumspect hand. This is a path the present-day army command ostensibly does not want to take. “The army cannot be fighting on too many fronts. They are totally absorbed in fighting terrorism in the north and the west, and at home. The third front is east, where the Indians look menacing. The army cannot be embroiled in a political drama,” says a high-ranking army officer, who cannot be named.

Ironically, these limitations on the army’s direct political role is feeding fears in the presidency that the generals are using the judges and the journalists to bleed the president by inflicting a thousand cuts on his character and abilities. This was precisely the impression General Kayani tried to dispel in his meeting with the president but, clearly, he was not convincing enough.

This has set the stage for intense political moves and counter moves in the coming weeks, deepening political friction and sapping the already dwindled capacity of the government to address lingering problems: an economy crippled by a widening war against terror and a frightening gathering of international forces on the country’s borders with Afghanistan. The irony is that while the prime minister, whose government is in power, does not feel threatened, the president, who constitutionally has nothing to do with the fluctuating fortunes of governments and cabinets, is making frenetic calls to arms. The fight has become personal, and there appears to nothing glorious about the way it might end.