About two years ago, I had a chance to meet several intelligent and educated Bangladeshis in Melbourne. They held a common perception that things needed to change in Bangladesh’s politics. And since the two key political parties could not bring themselves to manoeuvre the change, there had to be a mechanism that would enable other stakeholders to climb on the military’s shoulders and bring about the perceived transformation. This was eventually achieved in 2007, through the removal of the then political government which, along with its rival party, the Awami League, was accused of corruption. Unfortunately, the above recipe didn’t achieve much in terms of changing the political players. Eventually the caretaker government had to back off from its earlier position of administering accountability and rooting out the corruption in politics.

Yet the conversation with these Bangladeshis, and later others, was interesting in that these people were not willing to listen to a Pakistani warning them about encouraging the military to over-extend its power, or civilian players using the armed forces to bring an internal change. The usual explanation they offered was that it was not that the army was being encouraged to come into politics but rather it was just being used to bring about a transformation. So, the army’s role, in the eyes of these Bengalis, was temporary. They would be dismissive of my remark that Bangladesh had begun to look like Pakistan and that they were making the same mistake as Pakistanis, of empowering the defence forces. In most cases my opinion was rejected, as it had been in February 2006 when I visited Bangladesh and was shocked to see the similarities with Pakistan, especially vis-Ã -vis the military’s outreach into the economy and society. The average middle-class Bengali had begun to look up to the military as being better and more organised than the raucous politicians. I had warned many Bangladeshi friends about the dangers of allowing the military to extend its tentacles into the economy, but I was told to take off my tinted Pakistani glasses. The liberal intellectuals wouldn’t even entertain the possibility of democracy being in danger in the country. Approximately 15 months later, another kind of change took place that proved my fears right.

I had witnessed the unfolding of the new Bangladesh model that was about an externally induced political change by a partnership between the judiciary, bureaucracy, the upcoming middle class and the military. The educated middle class, which otherwise shunned politics and wouldn’t soil their hands with the business, used the defence services to bring about a change. The ultimate hope was that the ordinary people would appreciate this break and help build a new party with new faces. Sadly, the shift never took place.

More interestingly, little did I know then that my own country, Pakistan, would try replicating some segments of the ‘new Bangladesh model’ for itself. The judgment of the Supreme Court of Pakistan on December 17, 2009, which struck down the controversial National Reconciliation Ordinance (NRO) through a short order, represented the aforementioned move. The NRO pertained to the law cobbled together by the previous government of General Pervez Musharraf to withdraw corruption cases against the PPP and criminal cases against the MQM, and allowed the exiled leadership to return home. PPP leader Benazir Bhutto returned to the country in October 2007 but was assassinated two months later in December in a terror attack on her pre-election rally in Islamabad, for which many blame the military government of Pervez Musharraf. What happened on that fateful day remains a mystery. 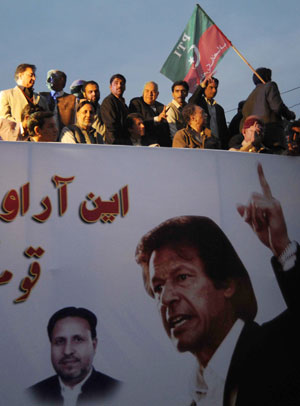 The tragedy paved the way for Benazir Bhutto’s controversial spouse to return to Pakistan. Later, the party won the 2008 elections and soon after that Asif Ali Zardari became the president of the country. However, Zardari’s ascendancy to power did not meet with the approval of the new middle class — the civil and military bureaucracies and the business and industrial interests in the country — who saw him in the light of his earlier reputation as Mr 10 per cent. Zardari was, indeed, corrupt and continued to hold that reputation. There were stories after stories of how he redistributed funds to his own cronies.

The new leader of the PPP made it to the top slot by cobbling together a political coalition between his party and the main opposition party, the PML-N. The relationship between the two parties, which were always ideologically and politically opposed to each other, was never smooth. In mid-2009, this resulted in the PML-N rallying around the cause of challenging the NRO. This soon turned into an important slogan which eventually led to the decision we saw on December 16.

Since the Supreme Court decision, the battle lines seem to be drawn between those who support the judiciary in its pursuit of punishing Zardari, who is considered the symbol of corruption, and those who believe that the superior court might be playing into the hands of the military in its singular agenda of hanging one man for his sins. The court, which had the option of selecting any of the cases that were withdrawn under the NRO, focused on picking just one case related to the president. Interestingly, the judges did not want to question the former army chief and president Pervez Musharraf’s decision to also allow withdrawal of criminal cases against the MQM. Although the accountability ordinance dealt with cases of corruption and did not cover allegations of murder, he used the NRO as an excuse to forgive the MQM, its leadership and members. The supporters of the Supreme Court are not inclined to notice the fact that the superior court appeared visibly biased in its treatment of the case and only seemed to be hounding a single person. They believe, instead, that persecuting Zardari would eliminate corruption from the country and was tantamount to strengthening the legal system. A close aide of the chief justice, Athar Minallah, even suggested that supporting Zardari after the decision was like making a criminal into an icon of liberalism that could backfire in terms of strengthening the religious right and the extremists in the country. Minallah, or other supporters of the judiciary, do not appreciate the fact that such bias could backfire even more seriously in terms of weakening the federation. The people of smaller provinces like Sindh, to which President Zardari belongs, view it as an attempt by the bigger province, Punjab, to corner the leadership from their province. They see it as a simple act of victimisation. And Zardari has not shied away from using the ethnic card to his advantage.

The current political mayhem in Pakistan represents a situation in which chaos multiplies due to the absence of any institutional mechanism of dialogue. Since all opposing forces ostensibly want to control the top slot in Islamabad (both directly and/or indirectly) and are unable to arrive at a consensus regarding the future of the state, all powerful stakeholders tend to use devious means to maintain their hold over the state. So, while the military or the opposition can manipulate or partner with each other or use a covert mechanism, the PPP leadership has chosen to use provincialism and ethnicity to fight back. 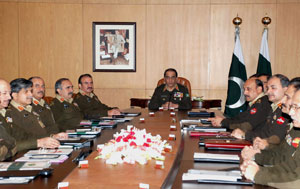 Bitter Khakis? Some analysts assert that the military is using the judiciary to oust Zardari because the president has upset the military-civilian balance. Photo: AFP

But the more important issue is whether the military was using the judiciary to indirectly fight and punish a politician who was seen as trying to weaken the military by conspiring with the US. The recently passed Kerry-Lugar Bill regarding assistance to Pakistan carries conditions that are seen as inimical to the military and Pakistan’s interests. More importantly, certain sections of the liberal civil society seem to be siding with the military in its reported attempt to put Zardari in his place. These are the same people who earlier held forth on the exploitative mindset of the armed forces and its intelligence agencies.

However, the issue here is not really of corruption at all. The other leaders, who are being considered as replacements, are equally corrupt, but their financial mismanagement is being hidden from the public eye. The main problem between the military and Zardari right now pertains to his sin of trying to challenge the traditional civil-military relations balance. Needless to say that corrupt politicians cannot really be rooted out through extra-constitutional measures as they always manage to convince the electorate of their innocence and get themselves re-elected. If there is anything that Pakistan can learn from the Bangladesh model, it is that illegal or extra-constitutional methods never really work. Democracy needs time and effort to take root. Replacement of the PPP with other equally exploitative interests will deepen the political divide within the country. Any mention of internal strife is a painful reminder of the 1970s. Unfortunately, the dominant forces prefer not to negotiate to solve the political problem, as they did with the Bengalis more than 30 years ago.