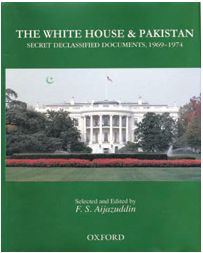 Here is a book that recounts some climactic scenes in contemporary history in a manner that could be played out in a theatre. The leading characters are familiar names — they were the movers and shakers of their times. And you have the lines they spoke. While you know the endings of specific episodes, the manoeuvering that took place in the hidden recesses of international diplomacy would still keep you on the edge of your seats.

Playing roles that were not portrayed by the headlines in the following day’s newspapers are characters such as Chairman Mao, President Nixon, Premier Zhou Enlai, Dr Henry Kissinger (as Assistant to the President for National Security Affairs), Zulfikar Ali Bhutto, Indira Gandhi and an assortment of foreign ministers, ambassadors and special assistants.

One does get some fresh insights into historical events when secret documents are declassified after a lapse of about three decades. Occasionally, they also provide intimate glimpses of the private lives of public figures. But the documents that F.S.Aijazuddin has selected, largely from the National Archives and Records Administration of the United States, hold our attention at many different levels. In fact, F.S. Aijazuddin is more than an editor, because his introduction of 54 pages, intended as a background to the declassified documents, is in itself an outstanding summary of the pre-1969 events that bound together the US, Pakistan and China. Aijazuddin is ideally equipped for the job, given the theme of his earlier book, From a Head, Through a Head, To a Head: The Secret Channel between the US and China through Pakistan. He guides us through a treacherous territory in which he feels quite at home.

Essentially, the book deals with two parallel themes: the role that Pakistan played in building a bridge between the United States and China and the influence that both the US and China exercised on Pakistan during the Bangladesh crisis and the war with India. Both were monumental events of recent history that cast long shadows across the globe and generated new realities. For us, in Pakistan, the tragedy of 1971 has retained its flaming significance, and here we have an additional incentive for introspection and inquiry.

To return to the great drama that this book unfolds, the most gripping scenes are delineated by conversations between the American and the Chinese leaders. Records of these conversations project the sensibilities and philosophical underpinnings of two separate cultures and societies. Standing apart is the ‘top secret /sensitive/ exclusively for your eyes only’ report Kissinger wrote for Nixon on his secret trip to Beijing and meetings with Zhou Enlai in July 1971. It is really a fascinating document and Kissinger was totally overwhelmed by the experience. In particular, he seemed almost astonished by the greatness of Zhou Enlai with whom he spent 17 hours in meetings and informal conversation. “In an initial session, Zhou Enlai made a one-and-a-half hour presentation, as always without notes, responding to each of the seven points on my original agenda.” Kissinger must have been embarrassed because he was carrying a hefty briefing book, which he later set aside. In his view, the Chinese leader ranked with Charles de Gaulle as “the most impressive foreign statesman I have met.”

Given the extensive nature of documents and interesting sidelights they contain, it is hard to choose significant references. Nixon’s famous tilt towards Pakistan and China’s resolve to stand by Pakistan during the East Pakistan/Bangladesh crisis provide many revealing observations on our leaders and politics. Talking about America’s influence on our country, here was one instance when Pakistan was not betrayed, in spite of the wide support for India in the political establishment of the United States.

As early as July 31, 1971, in conversation with Joseph Farland, Ambassador to Pakistan, Kissinger had said that if one were to ask his estimate, ‘there will some day be an independent Bangladesh.’ Even earlier, in February, in a memorandum to President Nixon, he said that “we could before long be faced with a declaration of East Pakistani independence.” It was in another memorandum in April that Nixon wrote: “To all hands. Don’t squeeze Yahya at this time,” strongly underlining the word “Don’t.” This was because Yahya was helping to build secret contact with Beijing. Zhou Enlai was also wanting to use the Yahya channel occasionally, even when the two countries had decided to maintain their secret contacts through other centres, because “one should not burn bridges that have been useful.”

Still, both Kissinger and Zhou Enlai had some harsh criticism of Yahya’s military leadership after the war had been lost. In a conversation with Nixon and Kissinger in February 1972, Zhou Enlai said that Yahya “didn’t know how to lead an army.” However, they agreed that they should not forget his contribution towards their secret talks. Kissinger said: “Actually the President sent a message to Bhutto that he should treat Yahya well in retirement and we would not look favourably on any retribution. It was a personal message from the President.”

There are numerous references to consultation and coordination to resolve Pakistan’s predicament. A concern for the defence of West Pakistan was strongly shared. In a meeting with senior Chinese officials in New York on December 10, 1971, Kissinger said: “Our judgment is if West Pakistan is to be preserved from destruction, two things are needed — maximum intimidation of the Indians and, to some extent, the Soviets. Secondly, maximum pressure for the ceasefire.” In the same meeting, he also said: ‘The Pakistani army in the East has been destroyed. The Pakistani army in the West will run out of what we call POL — gas and oil — in another two or three weeks, two weeks probably, because the oil storage capacity in Karachi has been destroyed. We think that the immediate objective must be to prevent an attack on the West Pakistan army by India.’ Both sides were anxious to find a way “to protect what is left of Pakistan.” There was this apprehension that Mrs Gandhi “might seek to take Kashmiri territory and destroy Pakistan’s armed forces.” The main objective of this meeting, as Kissinger informed President Nixon in a memorandum, was to inform China about various moves and “to indicate our approval of Chinese support for Pakistan, including diversionary troop movement.”

When Bhutto, designated by Yahya as Deputy Prime Minister, arrived in New York for the UN General Assembly, seeking to bring about a ceasefire and immediate withdrawal of forces, he worked closely with the Americans, particularly with the US ambassador at the UN, George Bush. A State Department memorandum before Bhuttowas to arrive at the White House on December 18 noted: “He is well aware of the political onus involved in Pakistan’s military defeat and wants to avoid being saddled with any responsibility for it. The defeat will complicate further the uneven relationship between Bhutto and the Pakistan military establishment. Nonetheless, Bhutto and the military will probably cooperate for at least the short-range future.”

In this great wealth of material, the most gratifying documents relate to records of conversations between the US and the Chinese leaders and they sound like dialogue straight out of a play. When President Nixon made his historic trip to China in February 1972, he had long meetings with Chairman Mao and Zhou Enlai and there were a lot of philosophical asides and flickers of humour in this interaction. Of course, they talked repeatedly about Pakistan and about South Asia.

At least initially, the Americans looked kindly at Bhutto, as a number of documents underline. An evaluation of Bhutto’s first year in office noted that he “can look back on his first year in office with a sense of accomplishment but no complacency. Domestically he has done much to place Pakistan’s troubled house in order while internationally he has made a beginning toward a new relationship with India, giving new hope for stability in South Asia.” But the same memo also said: “In the wings is the military, discredited by the loss of East Pakistan, but possessed of the memory of political control from 1958 to 1971. It is puritanical and simplistic in outlook, and may not yet have learned to accommodate itself to civilian control.”

Throughout these declassified documents, the inscrutability of relations between India and Pakistan runs as a binding thread of events. A very notable revelation is the repeated allusion by Bhutto to the fundamental need for an end to confrontation between the two South Asian neighbours. A telegram sent by Ambassador Farland to the Secretary of State on June 15, 1971 contains details of conversation between Bhutto and the DCM. They met for over an hour in the PPP leader’s suite in Hotel Intercontinental, Rawalpindi. Bhutto had called on President Yahya the previous evening. They, of course, discussed the prevailing political situation in Pakistan. “As Bhutto had told the ambassador at the last meeting, he was appalled at the army’s needless brutality,” notes the telegram.

Bhutto himself raised the issue of India-Pak relations. “He had come to the conclusion that there is need for a new effort to effect an Indo-Pak reconciliation. Costs of enmity have been too great. He admitted this would mean giving up his policy of confrontation. He did not say he would give in to India on Kashmir, but a review is needed of the range of problems between the two countries. As he went on this subject, Bhutto evinced a certain emotion and dabbed at his eyes with his handkerchief.” After this, there is a sentence in parenthesis: “(Later, he was seeing me out the door, he apologized for getting emotional.)” As a postscript, the telegram bears Farland’s handwritten note: “You should read this for a feel of the ‘new’, Bhutto. He sounds good — but I do not trust him. Above all Bhutto is a very sly fox as a politician and does very little without good reason.”

In September 1973, Bhutto visited Washington as Prime Minister and he was seen to be “in a stronger position politically than he has enjoyed at any time since he assumed power in December 1971.” In his welcoming remarks, President Nixon said that “Pakistan is a cornerstone of US policy.” There has been, as we know, an action replay of this emotion more than once in succeeding years. And yet, this relationship has remained enigmatic and somewhat tempestuous. It has acquired a new significance after 9/11 and the recent surge in anti-American feelings, as demonstrated by the astounding success of the Muttahida Majlis-e-Amal in the October elections, is a challenge for both countries diplomacy. This book provides some interesting material to enhance our understanding of the role that the US has played in Pakistan’s politics. In addition, there is some very relevant background material on the Bangladesh crisis — all extremely invaluable information to a people who have still to come to terms with the dismemberment of their country.