The October 10 elections brought a glimmer of hope for the Pakistan Peoples’ Party, of ending its stint in the political wilderness and getting back into power as a junior partner with the country’s powerful military and civil establishment. But by the time all the political wheeling and dealing for government formation was over in the swanky drawing rooms and plush offices of the federal and provincial capital the PPP found itself struggling to maintain its unity, once again targeted by the powers that be.

Makhdoom Amin Fahim, who started out as one of the favourite candidates for premiership soon after the election, saw his dreams of a “government of national consensus” crash before his eyes, as a powerful section within the party vehemently rejected all efforts at striking a deal with the establishment. The deal would have kept former premier Benazir Bhutto out of the country for at least a couple of years, and won freedom for her jailed spouse Asif Ali Zardari and given key ministries to PPP stalwarts.

In exchange, the PPP was expected to swallow what its hardliners call the bitter pill of accepting the controversial constitutional amendments made by President General Pervez Musharraf. It would have also compromised Bhutto’s political career for what some members called the expediency of a few party seniors, all set to grab the “crumbs of power” thrown at them.

The choice had never been so difficult and the stakes never so high for many of the party’s old guard. And for Bhutto, it was certainly a question of securing her political future.

The pro-compromise element within the party — a section of which eventually ended up forming the PPP Parliamentarian’s Patriots Group led by Faisal Saleh Hayat — believed that only a smooth and gradual transition of power would help revive democracy in the country.

The dissidents argued that the October 10 elections would not automatically bring the parliament back to the pre-October 1999 coup position. Therefore, reaching a compromise was not just logical but necessary. The parliament had to win back its supremacy, which it had lost because of Nawaz Sharif’s brazen follies and lust for power, in a gradual manner.

“It will be an over-simplification of a complex political process if we say that dissent within the party was the result of mere horse-trading,” said a senior PPP leader and close aide of Makhdoom Amin Fahim. “Faisal Saleh Hayat had a long association with the party and a history of sacrifices. The dissidents actually believed the path they were advocating was the right one, which eventually led to a parting of ways with the party.”

“But the leaders and lawmakers who opted to stay with Bhutto despite their difference of opinion on the issue are far more in number and I am one of them,” he said.

Ms. Bhutto accuses Hayat of changing his loyalties as a result of the pressures he faced from the National Accountability Bureau. The NAB had booked Hayat on charges of defaulting on millions of rupees worth of bank loans obtained for a textile mill, but freed him just two months before the October elections, a PPP spokesman, Syed Wasif Arshad said. The PPP had earlier accused the NAB of victimising Hayat through a cooked up case and been demanding his release. Hayat loyalists however, maintained that their leader’s decision to switch sides was based on conscience and not on political opportunism.

On the other side of the fence, the arguments against cooperation with Musharraf and sharing power with him were equally firm.

PPPP’s secretary general Raza Rabbani, said that the Parliament’s supremacy and sanctity of the constitution remained the cardinal principles of the party’s political philosophy. “All the constitutional amendments made by the Musharraf regime will have to be placed before the parliament, which alone has the right to totally accept, reject or partially accept the amendments in accordance with the laid down procedure. No individual and no institution except the Parliament has the right to amend the Constitution.”

PPP hardliners saw the National Security Council, comprising the service chiefs, as a supra parliamentary body to serve as a check on the Parliament and institutions of democracy. The most tricky issue, however, was denying Bhutto a role in the politics. 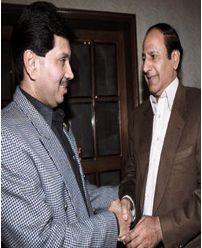 While some of Bhutto’s old loyalists, including Fahim, were of the view that her ouster from the PPP Parliamentarians’ affairs for a couple of years would not damage her political future in the long run, Bhutto and her close associates feel the move would erode her grip on the party, once and for all.

“In the tough conditions she laid down, Ms. Bhutto demanded that the government withdraw all corruption cases and release Asif Ali Zardari before she would agree to a deal,” said a senior PPP leader. “She also wanted to end her self-imposed exile and return to the country immediately, with her party’s nominated prime minister to welcome her at the airport,” he said.

President Musharraf, who was keen to include the PPP in the broad-based government, wanted Bhutto to remain out of the country, but agreed to give Zardari some relief. The government was ready to shift Zardari to his house as a first step, declaring it a sub-jail. After the installation of the democratic government, Zardari would have been released and allowed to go abroad.

The government’s negotiations with the PPP hit a stumbling block on personal issues rather than political issues, triggering a revolt in the party, says a party member.

But Bhutto loyalists deny that personal issues were the key demands made by their leader. “The issue was of principles,” Rabbani said.

Fahim wanted to keep Bhutto on board while striking any deal with the government, sources said. But Bhutto, who initially promised Fahim support in his efforts for government formation, put her foot down against the deal when it was drawing toward a close. Bhutto argued that the party would emerge in a poor light if it joined the government with all the corruption cases against their leaders intact and Zardari in prison.

Fahim, the chairman of the PPP Parliamentarians group, who was tipped as prime minister-in-waiting soon after the elections because of his cordial relations with Musharraf and the goodwill he enjoyed with rival parties, was left without the formal support of his own party at the time of crucial negotiations for government formation.

Bhutto continued to pull the strings of the party leaders from abroad, refusing to allow them independence of action. In a surprise move, she gave all powers to Nawabzada Nasrullah Khan, chief of the Alliance for Restoration of Democracy, saying that the PPP being the main component of the alliance, would go by the decision of its allies. Khan, who heads his tiny and insignificant Pakistan Democratic Party, tried to woo the main religious alliance, the Muttahida Majlis-e-Amal, saying that the two alliances would field joint candidates for the slots of prime minister, speaker and the deputy speaker. Much to the bewilderment and dread of the liberal and secular PPP lawmakers, the MMA’s pro-Afghan Taliban leader, Maulana Fazlur Rehman, was Nawabzada’s number one choice for the premiership, thus blocking Fahim’s campaign to form a government of national consensus.

However, much to the bad luck of Nasrullah Khan, the blank cheque given to him by Bhutto bounced at the 11th hour, when she refused to let her party vote for Maulana Fazlur Rehman, leaving the elderly politician literally out in the cold. While most PPP lawmakers heaved a sigh of relief that they didn’t have to vote for the maulana, the PPP found itself without any allies and partners.

Bhutto’s obstinate and unyielding demands for the release of her husband and withdrawal of corruption cases against the couple spoiled the PPP’s chances of joining the coalition government and led to the formation of a dissident faction, according to party sources.

“She doesn’t want the PPP in power — even in a coalition — in her absence,” said a disgruntled PPP lawmaker from Sindh province. She fears that it could erode her control over the party, he added. “It was just like pulling one’s own horse in the middle of a race,” said another PPP leader based in Karachi.

The Pakistan Muslim League (Nawaz Group), another component within the ARD, voted for the MMA during the premier’s elections, apparently sealing the fate of the hotchpotch alliance, which failed to pose an a serious challenge to Musharraf during his three-year rule. Bhutto’s politicking, however, left Fahim with a bitter taste in the mouth.

PPP sources say that the party turned out to be a major loser in the post October 10 scenario and has been reduced to a third force — from the traditional first or second position it always enjoyed in the parliament. The party stands divided from within now, they say. Many elected representatives are resentful of the unelected officials of the party who misguided Bhutto and encouraged her to remain inflexible, they said.

“We might see more defections, divisions and disillusionment in the party,” said a PPP parliamentarian from the Punjab. “The party is cracking under the weight of its own leader and her spouse,” he said.

But Bhutto loyalists insist that the losses in the near term will yield good results in the long run. Apparently, the party has taken two steps back, but Bhutto would bounce back, they say.

“Both Ms. Bhutto and Mr. Zardari have proved their mettle by their non-compromising stand,” said Nafees Siddiqui, a senior PPP leader. “Unlike the Sharifs, the Bhuttos chose to fight it out rather than flee in the middle of the night,” he said.

Will Bhutto defy the prophets of doom and gloom to stage a victorious comeback if the fragile coalition led by Mir Zafarullah Khan Jamali and its patron collapses? Is she still a leader in waiting? Many of her supporters believe she is. But for the time being, the going is likely to remain hard for the daughter of the East and her spouse who have seen their political career tainted by allegations of corruption and graft.