Khaled’s hit single, Didi, brought Arabic pop to Pakistan and the music scene has never been the same. The desi pelvic thrust and belly swivel syndrome hit every disco, dance floor and music video replacing western and Indi-pop as the sound of the moment.

The familiar sound of the traditional subcontinental tabla and harmonium in Arabic music has played a major role in its popularity in Pakistan. Another factor is the emotionally evocative vocal quality of Arab singers who sing with a passion that cannot fail to inspire a depth of emotion whether you can understand the lyrics or not. Equally stirring are the Arabic musical instruments, the most famous being the duff or tambourine, the marakkah and ‘rababeh’ or ‘rebec.’ The rababeh is an ancient Bedouin single-string instrument with a square soundbox played by single-string bow. Apparently the rababeh was initially used in the court of Baghdad over two centuries ago and is regarded as the precursor of the European violin.

Arabic music is the latest craze to hit dance floors in the city, from discotheques, Sapphire Lounge, Equinox, the Gymkhana ball to Sind Club’s Fez Night or private parties, Arabic music is what all the DJs are spinning. Algerian artists meanwhile are the ones hitting music charts worldwide, with their unique combination of different music genres that merge to create a whole new sound. The Algerian singer, Khaled, mixed reggae, ska, calypso, jazz, French chanson, Egyptian strings, latin, funk, African music, and Algerian rai to create classic hits like Aicha, Abdul Kader, and Di di. A two-year-old album is getting a lot of buzz lately, Ilham Al-Madfai’s Khuttar. This Iraqi singer’s album is a must-hear. Based in the US, he often tours the UAE and his tapes are a sell-out in Dubai and the entire Middle East region. 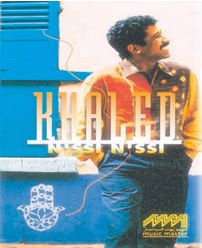 The Turkish singer, Tarkan, came out with the song, Simarik, about an irresistible girl playing hard to get complete with kissing sounds which became a super hit, while Cheb Mami, another Algerian singer, gained a great deal of international popularity when he sang Desert Rose with Sting a few years ago. If Sting, on his own was good, with the Arabic addition to Desert Rose — original, mixed, club-mix or remixed versions — it became the song of the year.

Remixed, unplugged, instrumental, or vocal, Arabic music has crossed all musical and cultural frontiers. The Algerians have mixed French with Arabic and even British singers have incorporated the sound of the desert into their music. Internationally, Arabic music has hit European and Asian charts but has yet to break into the American music industry. Selling millions of albums in France, most of the well-known Algerian singers have made their fortune in France, where even the ultra-hip hop Buddha Bar in Paris plays Arabic pop.

The word “music” comes from the Greek word “mousiki” which means the science of the composing of melodies. ‘Ilm al-musiqa’ was the name given by the Arabs to the Greek theory of music to distinguish it from ‘Ilm al-ghinaa’ which was the Arab theory. Henry George Farmer in his book; Historical Facts for the Arabian Musical Influence, notes that the influence of Arabic on musical instruments has been far wider than has been generally acknowledged. The origin of the words flute, rebec, guitar and naker are rooted in the Arabic words: Al-’ud, rabab, qithara. No wonder then that Arabic music has an appeal that cuts accross all cultures.

In Pakistan it is not so much traditional Arabic music but Arabic pop that has influenced Pakistani singers. Dance remixes have a different rhythm and add a different flavour to the typical rap played everywhere these days. There’s a wide range to choose from: Hisham Abbas’s Energised-The New Dance Remix, various artists’Arabia Remixed, Amr Diab’s latest album and Khaled’s compilation of all-time hits, not to mention our very own Shah Zaman who shot to the top of the charts with his hit song, Laila, a duet sung with Hayat Aloui. Another local favourite is Nari Nari that Risham Abass has sung with Indian singer, Asha Bhonsle. Walk into any music store in Karachi and you will find a wide variety of Arabic mixes, ranging from Arabic Groove to The Best of Bellydance from Egypt. Music stores are surprised by the sudden swing from India-pop to Arabic pop which is playing at every shopping mall, restaurant, and even beauty salons. Never mind if you can’t comprehend the lyrics, it’s the ‘in’ sound now.

And with the Mullahs ruling the Assembly, it’s politically correct as well.