In an overnight change of heart, Pakistan’s controversial establishment dumped its “blue-eyed” boys, Afaq Ahmed and Aamir Khan, after almost 10 years and mended its fences with the MQM (Muttahida) led by a man it once dubbed a “traitor.” The shift owed to the establishment’s determination to instal Zafarullah Jamali as Prime Minister, for which the Muttahida’s support was essential, and the move paid the required dividends in the short term.

However, the romance fizzled shortly after Jamali’s investiture as PM. The Muttahida withdrew its support to the government on account of what it saw as a betrayal by the military government. Reportedly, just one week after giving the Muttahida the green signal to enter the ‘No Go’ Areas like Landhi, Korangi, Malir, Lines Area, Khokrapar and some other parts of District East, hitherto controlled by the MQM (Mohajir), the latter’s strong-arm tactics forced the Muttahida to pull out its activists, and once again shut its offices in these areas.

Soon thereafter, the Muttahida announced the withdrawal of its support to the Jamali-led PML-Q and its decision to sit in the opposition in the Sindh Assembly.

Sources said that the MQM (Muttahida) had asked that Afaq, Aamir and other rival mohajir leaders be sent abroad, demanded guarantees of complete protection for its own activists, and a pledge from the establishment that it would arrest scores of its political rivals, in exchange for the party’s support. However, given the Muttahida’s latest stance it is obvious that its demands were not met.

Afaq Ahmed and Aamir Khan, two former joint secretaries of the Altaf-led Mohajir Qaumi Movement, were expelled from the party in 1991 along with around 100 other activists when they instigated a mini-revolt in the party. It may be recalled that both leaders, who were at the time controlling party sectors in Landhi, Korangi and Liaquatabad, were expelled, while they were in the United States.

According to sources, the renegades, whose lives were allegedly in danger upon return to the country, were subsequently inducted as allies by the then establishment headed by the late chief of the army staff, General Asif Nawaz, and IB chief Brigadier Imtiaz, with the blessings of the former premier, Nawaz Sharif, and were provided shelter by the Chaudhries of Gujrat.

The decision by the establishment to support the Haqiqi faction – a breakaway group headed by the two renegades – was reportedly taken to counter Altaf’s MQM following the killings of MQM (Haqiqi) activists in Karachi.

The differences between the MQM (Muttahida) and the intelligence agencies had sharpened by the end of 1991, and in December 1991, late Sindh chief minister, Jam Sadiq Ali, advised Altaf to leave the country saying he could be killed if he remained. Thus Altaf fled to London, where he remains in self-exile to the present. In May 1992, after Jam Sadiq’s death, Nawaz Sharif sent the army into Sindh to launch an “anti-terrorism” operation there and gave it corresponding powers under Article 147 of the constitution.

The ISI and MI played a prominent role in this operation. In the initial stages the operation was confined to flushing out the dacoits in interior Sindh, but there was a major shift in the operation after June 19, 1992 when the army came out in support of the Haqiqi leaders, and the group led by Afaq and Aamir managed to enter and gain control of Landhi, Korangi, and the Liaquatabad areas. Before 1992, these areas were considered ‘no go’ for the Haqiqi men, but after ’92 they became hands-off for Altaf Hussain’s followers. 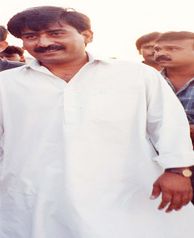 Through this period, the intelligence agencies continued to play politics, and their officers could be seen with the rival factions of MQM. They also forced many MQM legislators to support the former chief minister, Syed Muzzafar Hussain Shah.

There was another major setback for Altaf when the then co-chairman of the MQM, Azeem Ahmed Tariq, developed differences with him, reportedly due to the manouvering by intelligence agencies. Members of the latter were, in fact, present when he first surfaced at the residence of Khanum Gohar Aijaz, who was considered to be close to the authorities.

On May 1, 1993 Azeem Ahmed Tariq was assassinated, just a few days after he addressed a press conference where he made statements against Altaf. But it is still a mystery who was actually behind his killing. The three suspects who were arrested for the murder, were also killed after they were released on bail.

However, despite the Haqiqi’s control in certain areas and the support of the establishment, they failed to win any seats in the local bodies, provincial or national assemblies. It was only in the October 2002 polls that they managed to secure one NA and one PA seat for the first time in 10 years.

Nonetheless, the Muttahida managed to win 17 NA seats and 47 PA seats, and given the weak position of the PML(Q) at the centre, found itself in a strong bargaining position vis-a-vis the establishment. Sources disclosed that President Pervez Musharraf, who is said to have a soft corner for the MQM (Muttahida) and was in favour of an MQM chief minister, asked his top aide, Tariq Aziz, to negotiate with party leaders, and gave the establishment the nod to clear ‘no go’ areas in favour of the Muttahida. However, after Jamali made it to the Premier’s seat, the Haqiqi were back in business in these areas.

Meanwhile, even as the establishment was courting the Muttahida, cracks appeared in its own house, which resulted in the suspension of two top party leaders, convenor Dr. Imran Farooq, and deputy convener, Aftab Sheikh. Although they have only been suspended so far, for all practical purposes they are now out of the party, and it is only a matter of time before there is a formal announcement of their expulsion.

It is still a mystery as to what went wrong between Altaf Hussain and the two leaders, both of whom ranked among the MQM’s founding fathers along with (late) Azeem Ahmed Tariq, Akhter Rizvi, Saleem Shahzad, Tariq Javed, Tariq Mohajir, Aminul Haq, Ahmed Saleem Siddiqui, Kishwar Zehra and a few others. Interestingly, barring Shahzad and Javed, all the others have, over the years, left the MQM for one reason or the other. 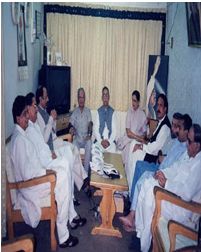 Those who remain close to Altaf, believe that despite these cracks in the MQM, Altaf’s grip on the party remains firm. They refuse to draw comparisons between the current situation and the crisis in the party in 1991, when Altaf Hussain sacked the then joint-secretaries, Afaq Ahmed and Aamir Khan, along with around 100 party activists, including sector heads.

“That was like a mini-revolt in the party prompted by the establishment, while the current action against Imran Farooq and Aftab Sheikh is just an internal disciplinary matter resulting from the party’s performance in the October 10 elections,” said senior party leader, Nasreen Jalil, who managed to retain her membership of the MQM’s central coordination committee.

It appears that Aftab Sheikh became the scapegoat as far as action against the coordination committee is concerned; he was the only member suspended for an indefinite period. Meanwhile, Dr. Farooq Sattar was promoted to the rank of senior deputy convenor and Dr. Ishratul Ibad became acting convenor, replacing Imran Farooq. There is an ongoing mystery about Imran Farooq’s whereabouts, as there has been no public reaction from him following his suspension. However, Jalil has confirmed that he is not at the London Secretariat. “He is living in London, but is not at the secretariat,” she said. And contrary to general perceptions, she indicated that while it is unlikely that Imran Farooq and Sheikh will be reinstated to their respective posts, they may still be given some other responsibility.

When asked what the grievances against them were, the MQM leader, who herself lost the National Assembly seat from Karachi’s Defence Society against former mayor and leader of Muttahida Majlis-e-Amal (MMA), Abdus Sattar Afghani, said, “Imran Farooq was not giving the party enough time when it was most needed. He used to come to the secretariat very late, not giving due time and despite reminders from Altaf bhai, he did not change. As far as Sheikh sahib is concerned, he has started speaking too much, and often issues statements which are against the party’s basic policies.”

Jamali, who become the country’s 20th premier will rule the country in great part, courtesy the support of 17 MQM MNAs and 10 members of the Pakistan Peoples Party “Patriot.” But while the latter bagged the highest number of ministries (six) as a reward, the MQM did not manage to secure even its demand vis-a-vis the ‘no go’ areas.

The Muttahida’s go-it-alone policy has made the establishment’s ambitions to form a compliant Sindh government even more difficult.

According to sources, Sindh governor, Mohammedmian Soomro’s role is adding to the confusion. He has serious differences with some of the top leaders of the pro-government Sindh Democratic Alliance (SDA). He has already been accused of manoeuvring the defeat of SDA chief, Imtiaz Sheikh, and former NA speaker, Elahi Bux Soomro and both have accused Mohammadmian on record of poll “rigging.”

The indefinite postponement of the Sindh Assembly Session is an indicator of just how uncertain the situation in Sindh is. Reports that the government is, once again, clearing the ‘no go’ areas to allow the Muttahida supporters and workers into the area, demonstrate that the establishment is cognisant of just how complicated the situation is, and is attempting a policy of appeasement. Certainly, the MQM’s role is now pivotal — in any vote of confidence taken by Prime Minister Jamali, and in the formation of a government in Sindh.

However, which way the MQM wind will blow, remains open-ended for the moment.