One of the city’s most feared policemen, Superintendent of Police (SP), Crime Investigation Department (CID), Chaudhry Aslam was killed last month when a powerful explosion targeted a convoy of police vehicles on the Lyari expressway in Karachi. Aslam was the head of  Karachi’s anti-terror operations and remained unfazed and determined in his mission to eliminate terrorism, despite  at least three earlier attempts on his life owing to his bold stance against the Taliban.

Aslam might have eluded death once again had he not responded to his associate’s call and gone to drop his children to their tuition classes instead. But, had he escaped with his life then, chances are he would have been targeted again and, sooner or later, some bullet would eventually have got him.

In its September 2013 issue, the US magazine Foreign Policy termed Karachi “the most dangerous mega city” in the world — with a seamy underbelly of target killers, a dangerous land mafia, arms dealers, drug lords, extortionists and kidnappers. The description was apt: the sprawling port city has literally become Pakistan’s crime capital with some killings being carried out for money, others for power, misbegotten notion of honour and ideology and even for ‘fun.’

While this situation unarguably points to the failure of policing, one cannot ignore the magnitude of threats law enforcers face in this volatile city. Those responsible for providing safety to civilians are themselves not secure and increasingly helpless.

For the Karachi Capital City Police, which is divided into three zones­ — East, West and Central — the year 2013 was the deadliest in decades. According to Citizens Police Liaison Committee (CPLC) data, as many as 171 policemen — two DSPs, three inspectors, 14 sub-inspectors, 16 assistant sub-inspectors, 30 head constables and 86 constables — were targeted in the city.

Attacks on policemen in the current year continue to rise: Since January 1, 2014, 24 cops, including Aslam, have been mowed down.

By comparison, the figures for 2011, while far from desirable, seem almost ‘good.’ That year a total of 53 policemen lost their lives.  According to CPLC statistics, in the eight years preceding that, i.e. from 2002 — 2010, about 200 policemen were killed in the line of duty.

The West Zone is most affected by the ongoing ethno-political and sectarian violence, where most of the policemen were gunned down. The zone has more than 42 police stations and areas under its command that include Orangi Town, Baldia Town, Pirabad, SITE, New Karachi, North Nazimabad, Liaquatabad and Sohrab Goth, among others. “A total of 10 policemen from the West Zone have been martyred in the three weeks of this year, with the number being 92 in 2013,” says DIG West, Javed Odho. “The West Zone has been mostly affected because both religious extremists and political militants are present within its jurisdictions.”

In these circumstances, policing in Karachi is much more challenging than in other cities of the country. To compound this situation, the police infrastructure is poorly managed. Critics often cite the lack of resources security personnel have to work with, and question the standard of their training. Apparently, they are understaffed, underequipped and undertrained.

For a city of over 18 million people there are merely 32,000 sanctioned posts in the Karachi police, with only 27,000 of them being occupied at the moment. To add to that, a huge chunk of the force is deployed for the security of ‘important’ personalities, foreign missions and other administrative jobs. “8,000 police officers are engaged in VIP protocol, whereas 2,000 of them are assigned to the special intelligence and investigation units,” says Atique Shaikh, spokesman for the Additional Inspector General of Police, Shahid Hayat. “The remaining contingents are available for duty at the police stations.” 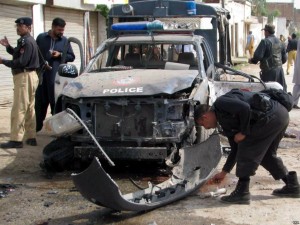 Who guards the guardians?: The police have been victims of numerous attacks over the years.

However, there recently seems to be some cognisance of the police’s straitened circumstances. The process to recruit more police officers in the ranks has been initiated. “We want the number to reach 50,000 by the end of this year; but it will take time. Therefore, we have hired 450 recent graduates from the Anti-Encroachment Force, whereas 1,500 ex-service men will also be staffed and this process has already begun,” says the spokesman.

But with threats ranging from militancy to target killings and from street crimes to kidnapping for ransom, an addition of numbers alone will not suffice to bolster the force or the citizens they are supposed to protect.  Currently, their equipment and the technology they operate with are obsolete, and a majority of officers on duty are not provided with the necessary protective gear, i.e. bulletproof jackets and helmets. “The Karachi police have about 1,300—1,400 jackets, with barely 36 armoured personnel carriers (APC),” maintains Shaikh. “The chief minister has ordered 2,000 bulletproof vests and 100 APCs, which hopefully will be delivered soon.” Protective gloves and helmets, he said, are provided to the anti-riot police, which come under the Special Security Unit.

DIG Jawed Odho adds, “The amount of bulletproof vests we have are insufficient — and many of them are out of use. We repaired 600 of them with our own resources.” 10 police stations of the West Zone are still due to receive their share of the recently purchased 2,000 bulletproof jackets and 100 APCs, any time.”

Meanwhile, the enemy is apparently far better equipped. Raids on criminal suspects’ hideouts have unearthed the sophisticated weaponry that forms part of their arsenals. These include hand grenades, Kalashnikovs, light machine guns (LMGs), sub-machineguns (SMGs) and rifles. On the other hand, the Karachi police use assault rifles and handguns, i.e. revolvers, pistols, etc. “We have hand grenades as well but we don’t utilise them because of the chances of collateral damage,” says the Sindh IGP spokesman.

Amid growing threats, enhancing capacity building is essential. Hence, the next step is training. Karachi has one police training college in Saeedabad, a Capital City Police Training School and an Elite Training Centre in Razzaqabad. Besides conventional crime, the police are now dealing with terrorism as well. Yet, the perception remains that a lack of modern facilities, i.e. sharp-shooting courses, a DNA laboratory, forensic training, etc., coupled with an outdated syllabi, has damaged the scope of effective training. According to a 2009 report byDawn, the state of police training in Sindh remains depressing, thus increasing the force’s vulnerability. “Yes, we need new technology to give a fitting response to the outlaws,” contends Shaikh.

All this notwithstanding–and despite the low pay-scale, deep-rooted corruption within the ranks, political influence poor infrastructure and an ebbing morale–the ongoing targeted action in the city has borne some fruit. There has been a significant reduction in civilian casualties and kidnappings since September 2013. The Inspector General of Police, Sindh, Shahid Nadeem Baloch has termed the ongoing Karachi operation as “the last hope for a crime-free Karachi.”

One can only hope that the action to stem crime, terrorism and lawlessness is not too little, too late.

This article was originally published in Newsline’s February 2014 issue.