The rise of jihadi militancy in Pakistan and the increasing violence has severely affected the province of Khyber Pakhtunkhwa and adjacent Pashtun territories of FATA. The unending row of terrorist attacks on civilians and law enforcement agencies and killings over tribal and political disputes have left the people hapless and disillusioned.

Many parts of the province have undergone military operations, endured hardships, faced internal displacement and incurred significant human and monetary losses at the hands of the militants, while human rights violations and brutality from both the militants and the military have consistently been reported.

The effect of this unending conflict on society can be gauged on different levels and in different spheres. In the political sphere, its effects were visible in the recent general elections when secular parties like the Awami National Party (ANP) and the Pakistan People’s Party (PPP) were wiped out, while conservative parties such as Pakistan Tehreek-e-Insaf (PTI), Jamiat Ulema-e-Islam (JUI-F) and Jamaat-e-Islami (JI) emerged victorious.

Striking a common note between the PTI and JUI-F is their similar stance on militancy and the ‘War on Terror,’ by playing on anti-US rhetoric and exonerating the Taliban of their crimes using arguments that are devoid of reason.

But what distinguishes them is their distinct and different support base. JUI-F finds most of its support from the traditional religious orthodoxy,  while for most PTI enthusiasts religion, is used as means of identity rather than a set of practices

The degeneration of politics based on broad ideological divides has narrowed it down to the issues of ethnic or sectarian identity. The space has been filled by a more inclusive and broad based religious identity promoted at the state level through various means.

PTI finds most of its support in the youth of urban middle class, which has been fed an overdose of right-wing Pakistani nationalist discourse, centred around conspiracy theories of various types, and the demonising of everyone except themselves. Their minds have been further muddied by movies and the multitude of talking heads that rule on television today.

The conspiratorial mindset was demonstrated well when Peshawar University had to retract the decision of the academic council to include books by the controversial English novelist Salman Rushdie in their M.Phil and PhD courses, after photocopies of the summary draft were distributed and public outrage was threatened by academics from the JI.

Similarly, when Malala Yousufzai was shot by the Taliban for speaking against their rule in Swat and advocating girls’ education, Samia Raheel Qazi, a former parliamentarian and daughter of the ex-Amir of the JI, posted a picture of Yousufzai meeting former American diplomat Richard Holbrooke, and labelled her a CIA agent.

Recently, the launching of Malala’s autobiography, I am Malala, at the Area Study Center, Peshawar University was halted by the provincial government citing security reasons. Provincial minister Shah Farman defended the decision by calling it an activity which had no relevance to the university campus. 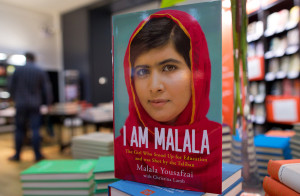 Banned: The launch of Malala Yousufzai’s autobiography was recently halted at the Peshawar University by the provincial government citing security reasons.

The main objective of the book review was to dispel the impression that was creating confusion. An academic from the political science department of Peshawar University commented that one of the recommendations was to make I am Malala available in the university library once it had been reviewed by the Academic Study Centre.

Meanwhile, a recent World Health Organisation (WHO) report has declared Peshawar as the “largest reservoir of polio” in the world. The campaign against polio in many parts of the province is leading to a dead end as various militant groups are consistently targeting polio aid workers and the policemen who protect them. Tehrik-e-Taliban Pakistan (TTP) Mohmand chapter has denied their involvement in these attacks, saying smaller groups of militants are more likely to blame. This, however, makes little difference to the apologists within the media and the political parties, who find ways to excuse even those attacks for which the TTP claims responsibility.

The rhetoric concurs with the overall argument concerning the state’s unwilling partnership in the ‘War on Terror,’ its repercussions for the country, and its reluctance to take any kind of large-scale action against the militants.

The disarray on the state level has been portrayed well with the political parties at the centre and the province paying more attention to various steps curtailing terror incidents by providing better equipment and training to law enforcement agencies, while doing nothing to disarm the militants who are perpetrating the attacks and operating with impunity in almost every city in Pakistan.

During these years the people of Khyber Pakhtunkhwa and neighbouring FATA have been on the receiving end, with Peshawar suffering the most, even after the PTI took office in June 2013.

Peshawar witnessed 222 deaths, out of 391 in all of KP, in the first four months of PTI’s regime. Comparatively the previous four months had seen 122 deaths in Peshawar — an increase of almost 55 per cent since PTI’s accession to power, according to the South Asia Terrorism Portal (SATP).

Though the number of deaths dropped in the last quarter of 2013, and in the first month of 2014,  a sudden rise in terror attacks has taken place recently, but it has not been restricted to Peshawar or Khyber Pakhtunkhwa.

Given all this, people’s hopes haven’t faltered yet, even if the signs of weariness are evident. An elder man, when asked about his choice in the upcoming local bodies’ polls, replied, “We have been voting for ANP, who stand by us in thick and thin and are the first to arrive when we die.  But I have decided to vote for PTI so we may survive and live longer.”

This article was originally published in Newsline’s February 2014 issue as part of the cover story.