The ethos of a land known, over the centuries, for its Sufi values and shrines, is undergoing a fundamental change — but its liberal intelligentsia is not willing to admit this, or perhaps even acknowledge it to themselves. Walk into Shikarpur and see the remains of the numerous NATO tankers that were burnt there by extremist elements, possibly in collusion with the oil mafia from the area. Go to the province’s border districts and you will find Jamaat-ud-Dawa (JuD) graffiti everywhere invoking people against India. The Salafi JuD is not openly converting people to its credo yet, but the writing is on the wall: both non-Muslims and Muslims from the Sufi and Barelvi traditions will inevitably be their next target of attention. And while this is a little known fact, many Sindhi youth from Sanghar, Khairpur Mirs, Jacobabad, Ghotki, Kandhkot, Kashmore and Shikarpur, have actually been enlisted and dispatched to fight the ‘jihad’ in Afghanistan.

There may be several reasons for these developments, but the most critical of these is the unfettered expansion of the madrassah network in Sindh. According to the Deeni Madaris Pakistan Ki Jaamey Report, in 1988 the Deobandi Dar-ul Uloom seminaries in Sindh numbered 208, Barelvi ones 61, Ahle Hadith 6, Shia 10 and others 6 . But in the past decade or so, the number of seminaries has doubled in Ghotki, Jacobabad, Shikarpur, Kandhkot, Sukkur, Kashmore, Thatta, Mirpurkhas, Dadu, Jamshoro, Badin, Karachi and Hyderabad. And the majority of the students at these seminaries are indigenous Sindhis and Baloch-Sindhis inspired by political Islam and the religious extremist ideologies of those who fought the Afghan war during the Taliban regime.

Religious extremists have also made seminaries in the riverine or kutcha areas of the Sindh province in Taluka Kingri, UC Kot Mir. This emerging madrassah network is supported by some influential feudal lords and villagers from indigenous tribes such as Narejo, Phulpoto, Baloch, Marri and Brohi. They also have the support of the local land-owning gentry and farmers. In addition, there are many Baloch tribes from Jacobabad, Kandhkot Kashmore, Shakirpur Mahar, Pahore, Shadi Shaheed and Khairpur Mirs that are inspired by the Taliban. Sectarian parties such as the Sipa-e-Sahaba Pakistan (SSP), now operating under its new name, Ahle Sunnat Wal Jamaat ( ASWJ), Lashkar-e-Jhangvi, Sipah-e-Mohammad Pakistan, Tehreek-e-Jafria Pakistan(TJP), Sunni Tehrik and Majlis-e-Wahdat-ul-Muslimeen (MWM) — the leading group of the Shia school of thought — are, in fact, gradually entrenching themselves among the Sindhi masses in the rural and urban areas of the province. 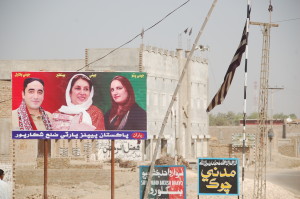 Sindh’s changing landscape: A SSP flag next to a Bhutto family hoarding.

The middle class in Sindh may be peace-loving, but the new reality is the increasing rise of the religious right, including militant outfits, and the proliferation of madrassas. Today, businessmen from Khairpur Mirs and Thari city, and traders from Memon, Sheikh and other tribes contribute sizeable resources to right-wing organisations. Even international companies play ball: one such company in Khairpur recently awarded a huge contract to a member of a religious extremist group. Against this backdrop, middle-class Hindus, who up until now lived quite comfortably in the province, have begun to feel increasingly insecure. Their insecurity is heightened because, of late, there have been several instances of Hindu women being kidnapped and forcibly converted to Islam. Some Sindhi shrines, such as that of Bharchundi Sharif is, in fact, now well-entrenched in the business of conversion with substantial support from religious hardliners.

To compound the situation is the state support provided to extremist elements. This was particularly evident during the 2010 floods when relief funds poured in from the Arab states, and were funneled instead to jihadi outfits. The genesis of the jihadi ethos dates back to the Afghan war of the 1980s, and the inability of the ruling class to provide an alternative to the common man in Sindh.

The sectarianism that we observe now, actually dates back to the years after 1947, when there were incidents of violence between Shias and Sunnis.

On such incident occurred during Ayub Khan’s One-Unit era in Khairpur Mirs, where sectarian riots took place between Shia and Sunni sects in which more than 50 people were killed. But as in the rest of the country, Sindhi landowners generally discouraged the influence of clerics and supported Sufi religious institutions to which they have ancestral links.

The post-Bhutto era ushered in Zia-ul-Haq and with him extremism and religious radicalism in the country, which filtered into Sindh as well. Zia espoused a policy of political Islam in the state and encouraged sectarian violence in Pakistan. In the 1980s, Sindh resisted such influences and the Sindhi masses supported liberal, secular and left-wing political parties like the PPP led by Benazir Bhutto, Jiye Sindh Tehrik led by late GM Syed, and Awami Tehreek Party led by Rasul Bux Palejo, Shaheed Fazal Rahu and Jam Saqi, all Communist party leaders.

Slowly, however, Zia’s Islamisation and patronage of ethnic politics reduced the province’s secular space. The dictator also supported feudal landowners, thereby continuing to marginalise ordinary Sindhis. Later, General Pervez Musharraf’s local bodies system, which continued during the five years of the PPP government, provided state patronage to feudalism that added to the frustration of the common man. It was in this context that militant forces, which were parachuted into Sindh during the last decade, started to have a visible impact. Today the emerging middle class, especially the traders, view the forces of the religious right as a viable alternative force to the traditional forms of power. Therefore, it was not a major surprise when religious parties, even those who espouse the political Islamic ideology of the Taliban, got more votes than Sindhi nationalist parties.

Growing religious extremism now poses a big challenge for the PPP and Sindhi nationalist secular parties. If they cannot combat the rising trend of religious extremism, the secular and Sufi ethos of Sindh may soon be a thing of the past.

This article was originally published in Newsline’s February 2014 issue as part of the cover story.