Nawaz Sharif knew well what was in store for him when he boarded PIA flight PK 786 at London’s Heathrow Airport for Islamabad on September 9. Over the last few days, Prince Muqrin bin Abdul Aziz, the chief of Saudi intelligence, had made several phone calls to the former two-time prime minister to convey a blunt message: he would be deported back to Saudi Arabia on his arrival in Islamabad. However, at that point it was difficult for Sharif to backtrack on his plan.

The deportation plan was finalised in a meeting between General Musharraf and Muqrin in Islamabad on September 8. The Saudi government was fully on board. “We are ready to welcome Nawaz Sharif back in Saudi Arabia,” declared the prince, who is one of the most powerful figures in the Saudi ruling hierarchy, after the meeting. The appearance of the Saudi intelligence chief before the media was, in itself, unprecedented.

What was also unusual was the blatant involvement of the Saudi government in Pakistani politics. An earlier Saudi government statement chided Sharif for breaking his promise. “Wisdom dictates that Mr Sharif abide by his promise not to return to Pakistan and to political activity,” remarked a Saudi spokesman.

Some political observers believe that the Saudi government’s involvement may possibly have the blessings of Washington, which continues to place its bets on General Musharraf. Given that Sharif’s release from jail and his exile to Jeddah in December 2000, brokered by the Saudi government, also had US support, the suggestion does not seem far-fetched.

The US government has been rather sceptical of Sharif’s return and the role he might play in Pakistan’s political system, and has been pushing for an alliance between Musharraf and Bhutto. Additionally, it is becoming increasingly concerned about instability in a country that is on the frontline of efforts to tackle terrorism. Interestingly, the deportation drama took place on the eve of the arrival of US Deputy Secretary of State John Negroponte.

A mild US reaction to Sharif’s deportation has only reinforced the reports. “The decision to deport him runs contrary to the Supreme Court’s decision but, as I said, it is still a pending legal matter,” State Department spokesman Sean McCormack told reporters. 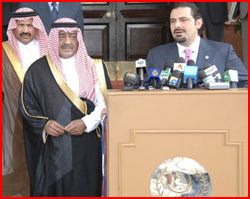 The plan came into operation soon after the PIA airbus carrying Sharif and a large party of media persons landed at Islamabad International Airport. While strict security measures prevented his supporters from making it to the airport, scores of police and paramilitary troops surrounded the aircraft. After a 90-minute stand-off, Sharif was escorted to the VIP lounge, where he was served a warrant of arrest and, a few hours later, bundled into a waiting aircraft that flew him back to Saudi Arabia where he spent the first six years of his exile till December 2006. Sharif’s predicament — sitting in an airport lounge ad-libbing for cameras before taking off again — formed a bizarre piece of political theatre broadcast around the world by the reporters who accompanied him on his journey.

The government claimed that Sharif chose to return to exile rather than face corruption charges presented against him at the airport. “He was offered an opportunity to return to Saudi Arabia in line with his previous agreement, and he chose to do so,” claimed the minister of state for information and broadcasting, Tariq Azeem Khan. But this is far from being a credible story.

By sending Sharif into forced exile, President Musharraf may have sidelined his nemesis once again, but the move has further eroded his dwindling credibility. The former prime minister has now become an even stronger rallying point for a burgeoning anti-government movement. It is quite apparent that Musharraf has decided to ignore the recent Supreme Court ruling that Sharif and his family be allowed to return home without any obstruction. This has also set the military ruler on a collision course with the Supreme Court, with which he already has extremely tense relations.

General Musharraf faces the most serious challenge yet from an increasingly assertive Supreme Court which is to start hearing a petition challenging his candidacy. Legal experts say that there is only a slim chance of General Musharraf getting a verdict in his favour.

Sharif’s deportation clearly indicates that Musharraf is now prepared to go to any lengths to perpetuate his rule. His latest confrontation with the Supreme Court carries serious political implications. It has also stoked speculation, which has been simmering for weeks now, that Musharraf may choose to declare a state of emergency, or even martial law.

He was recently on the verge of declaring a state of emergency before apparently being stopped by the US Secretary of State, Condoleezza Rice, and the opposition from within his own civilian allies. A senior cabinet minister maintains that the possibility of emergency rule cannot be ruled out. General Musharraf’s increasingly tough stance may also affect his talks for a power-sharing arrangement with another exiled former prime minister, Ms Bhutto. The deal, which reportedly had almost been concluded, has been stalled after opposition from Pakistan Muslim League (Q) leaders.

Bhutto claimed the negotiations with Musharraf were designed to achieve a peaceful transition to democracy and ensure a stronger balance between the powers of the president and parliament. She insists the dialogue was necessary since the country’s security was threatened by terrorism and religious extremism. “Pakistan’s unity is at stake because of terrorism and religious extremists,” she said. “So, the need for unity among the moderate and liberal forces is much greater today.”

She warned that failure to reach an agreement could prompt a people’s uprising akin to the Orange Revolution in Ukraine in 2004. “It is up to the government to decide whether it wants a peaceful transition to democracy through free and fair elections, or whether it wants to face the people’s power,” and a “Ukrainian-style Orange Revolution in Pakistan,” said Ms Bhutto in a telephone interview from Dubai.

The negotiations have cost Bhutto hugely. Her popularity has taken a hit and she also faces dissent within her own party ranks. She could further damage her political standing if she were to align herself with Musharraf following the deportation of another opposition leader.

As for Nawaz Sharif, it is unclear whether his Saudi hosts will force him to stay in their desert homeland, or allow him to return to London to rejoin his family. Whatever the case, PML-N lawyers in Pakistan are working towards a different solution: fighting his deportation in the Supreme Court and getting Mr Sharif back onto Pakistani soil.

If they can do that, Nawaz Sharif may turn out to be the general’s toughest and most dogged foe in years.