A seasoned photographer known as much for his intriguing fashion shoots as his incisive photojournalism, Arif Mahmood engages the onlooker on a psychological plane to drive home his point of view. His latest exhibition, Multiple Spaces, at Canvas capitalises on the impact of instant contact to draw in the viewer. He has effectively played with dramatic subjective content to evoke several levels of viewing a single shot. Using his uncanny ability to perceive and capture what is beyond the apparent, he transforms his images of ordinary souls caught in the grind of life, into complex docudramas of humanity in the grip of social and cultural constraints.

Effective street photography is about telling a story in a single frame, not simply recording what was there at a particular time and in a specific place. People’s expressions are fleeting and a situation’s compositional opportunities are always in a state of flux. Catching the right moment, particularly when there is more than one person in the frame, is just as difficult as a sports photographer’s job in terms of catching the moment of peak action. Arif Mahmood shoots with the adroitness and concentration of one who has an intuition of what is about to unfold. His images hinge on what is transpiring. It is this quizzical moment of a ‘happening’ that draws the viewer to his compositions, and “a story within a tale” begins to unfold.

Using the power of street photography to explore the human condition, Mahmood focuses on subjects caught unawares — he clicks the natural expression or the usual environment but it is his juxtaposition of opposing, contemplative or conflicting attitudes and situations that compounds the single image into multiple spaces. His portrayal of the real and the ordinary is charged with subtleties that reflect societal anomalies and disparities. The sadness hidden in the happy smile, modern architecture at variance with urban detritus, grills concealing yet revealing censorious pleasures, aging edifices tacky and worn but still standing tall. Particularly poignant are the indecisive expressions of people, faltering and uncertain, lost and shaky or just resigned. Are they victims of circumstances — just cogs in the massive wheel of life — or a forgotten humanity left to fend for themselves as best they can? 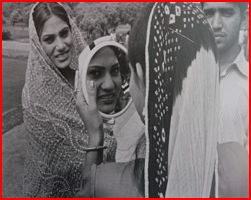 In this particular exhibition, the photographer invokes a world within a world through intelligent use of reflections on various transparent surfaces. Culturally multipart, complex, grimy, shabby or busy street surroundings manifest on a car window, rear view reflector, in a water puddle, through a broken pane, in a looking glass, a wayside barber’s mirror or through a microscope lens and present the onlooker with skewered images of a third world city. Fragmented views seen through shards of broken glass and the kaleidoscopic mosaic intensify the off-centre stance. It is perhaps the photographer’s intention to portray man in a world gone awry. Multiple Spaces is full of individual anecdotes within complex narratives and demands extended engagement to be understood in context.

Street photography is a subset of documentary photography. It is based on scenes from everyday life of its subjects, and other than shots of streets, it may also focus on markets, bazaars, religious festivals or any other urban centre or celebration. Street photography often has a social or political message and it tends to centre more on an ironic statement relating to its subject directly, instead of commenting on all similar subjects. Essentially, the intent of street photography is to function as a mirror that reflects its immediate subject. While it may seem counter-intuitive, black and white prints tend to be the main medium of street photography; by eliminating colour, the photographer pulls the viewer’s focus into the action or onto his subjects, preventing distraction from garish colour.