After missing many deadlines, the National Art Gallery (NAG) finally opened its doors in August 2007 to give visitors an opportunity to see the largest-ever collection of Pakistani Art showcased in 16 curated exhibitions under the title, Moving Ahead.

The regal red brick building of the National Art Gallery, poised on a low hillock, is located diagonally opposite the Parliament House in Islamabad and can be accessed from Constitution Avenue. This exclusive address gives visibility to the institution, but can present accessibility issues in times of a security crisis.

“The whole concept of our design for the National Art Gallery is a series of squares, which is the essence of the universal whole,” explains Naeem Pasha in the catalogue. “We arrive at this form from nature, tradition, unconscious creativity of the folk and the concept of a circular circulation pattern which is the essence of viewing.” This has been interpreted into an architectural design with multi-levelled spaces and light sources that provide an element of surprise in the large and small exhibition halls, without distracting from the exhibits. The medium-sized auditorium and courtyard, with detailed brickwork, are rescued from the mundane and connected with the exterior. A variation in the material and pattern add a subdued textural richness to the connecting hallways and corridors.

The National Art Gallery project was first initiated in 1981, but the will to complete it was lost in the political agendas of changing political regimes till it was taken up again several years ago and Naeem Tahir, the director general of the Pakistan National Council of the Arts (PNCA), was allocated funds for its completion by the present government.

The part of the building yet to start functioning includes the Honor Galleries on the third floor and the basement storage vaults, which will be operative by the end of the year, says Jamal Shah, director of NAG. But at this nascent stage, NAG is facing financial constraints and the inaugural show may have to come off sooner than later. At the inauguration there was much talk about a renewed commitment to art and President Musharraf went on to call the visual arts of Pakistan the country’s best kept secret. Now is the time to translate that talk into money and action so that the show can be extended and the maximum number of citizens, particularly students, can experience this cultural phenomenon.

In a break from earlier practices, PNCA invited curators from all over the country to present curatorial proposals for the inaugural shows. After more than a year, these exhibitions have been installed and collectively project the breadth of the formalist movements and individual innovation in a powerful visual expression that has evolved in response to the epoch the artists have lived and worked in.

Three survey shows provide the visitor with a historical space perspective. Leading from the foyer into the Grand Hall is the show Iconic Presence, which establishes the inspirational energy of the early masters. Curated by Jamal Shah, its chronological display gives an overview of the stylistic and conceptual evolution of painting through national masterpieces from the PNCA collection.

A similar show Celebration, curated by Marjorie Hussain, on the first floor, offers a glimpse into the diverse art practices of 47 practicing artists, mainly from Karachi and other parts of Sindh.

Just two galleries away is The Making of History in which the curator, Rahat Naveed Masud, concentrates on the artists of Lahore linked to the National College of Arts and the Fine Arts Department of the Punjab University to underscore the influence of the two mentors, Shakir Ali and Anna Molka Ahmed, who headed these institutions.

Despite the popular belief that sculpture has few exponents, An Intensity of Space and Substance surprises the visitor with the revival of the three-dimensional form. 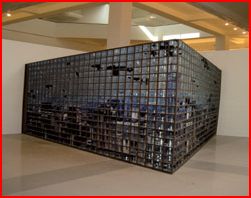 In the presence of works of Novera Islam, a pioneer, and Shahid Sajjad, the solitary sculptor who persevered against great odds in the most repressive of times, is a large body of contemporary sculpture. The exhibits — many of them have been commissioned by the curator Salima Hashmi — exude an experimental zeal. Their content and unconventional material blur the line between conventional sculpture, installation and third-dimensional art objects.

Similar tensions between conventionality and the avant-garde inform Re-forming the Landscape, curated by Nazish Attaullah. The transformation within this popular genre is evident from the formalist and conceptual interpretations on display.

The thematic shows Love and The Figurative Impulse are investigations into the time-honoured focus of art. The curators, Quddus Mirza and Aasim Akhtar respectively, present a provocative reading from the oeuvre of Pakistani artists.

The Ceramic Gallery of NAG features Hasan Kuzagar Kay Naam. Curated by Niilofur Farrukh, the show is dedicated to the continuum of clay as a creative medium. The works define new trajectories in ceramic art that challenge the stereotypical perception of the medium.

Two smaller shows have been dedicated to individuals, Eqbal Geoffrey and Masood Kohari. Located in a makeshift gallery near the entrance, curator Amna Pataudi has mounted the witty mixed media collages, crafted from the popular print media of Geoffery in a show , titled Outreach of Neo Renditions 1957-2007. The glass reliefs by Masood Kohari greet visitors with their fragile translucence in the foyer. Kohari who is also its curator, has titled the show Transfuge.

Curator Hanif Waqar’s exhibition Visual Concept is an inclusive gesture that showcases outstanding talents in the country that have fallen though the cracks of the curatorial discourse of other shows.

The diasporic artists, who have gained recognition in their new homeland, make a comeback in Atteqa Ali’s show,  titled Homecoming. Her other exhibit, Out of the Cube, comprises work commissioned for spaces in the elevator, washrooms and staircases to challenge fixed notions of art and its installation. 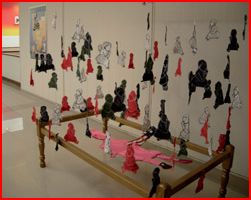 Dialogue with Tradition presents an insider’s view of the revivalist movement of the neominiature. Its curator, Imran Qureshi, presents lineage as a challenge open to reinterpretation. Displayed in the exhibition is the response of eight neominiaturists, to select miniature paintings by the pioneer Ustad Haji Mohd Sharif from the PNCA’s collection.

Another show that looks at traditional art forms, Envoy of Wisdom curated by Rasheed Butt, with its emphasis on immaculate skill and understanding of scripts, projects formalistic purism with authority.

Even to the jaded eyes of art professionals, the coming together of some 400 works has been an intellectually invigorating experience and its significance can be understood at many levels.

While the emphasis, understandably, is on contemporary art practice as indicated by the title Moving Ahead, what is sorely missed is a more extensive display of the art of masters like Sadequain and Shakir Ali in the Honor Galleries to not only acknowledge their contribution but add weight to the historical perspective, critical to any national collection.

The exhibitions have given art critics and historians an opportunity to see the emergence of new idioms and its articulation facilitated by technologies.

The apparent shift from modernism to postmodern concerns has hastened the collapse of conventional boundaries. Contemporary art has taken on a pluralistic persona, and its strength lies in its ability to adapt the local and the global into an accessible hybrid vocabulary.

Also highlighted is the increasingly marginalised position of the painting, as we have known it for the last few decades. New ways of seeing translates content in art objects, installations, digital imaging etc. Time and space conundrums are taken up in video art.

Many artists have successfully extended their work to video art, pointing to new media intervention in visual expression.

Within this context, the ascendancy of neominiature as the bridge between tradition and 21st-century global imperatives has created a synergy that reconciles cultural continuity within a contemporary framework.

The outstanding talent of Rashid Rana, whose ability to conceptualise with ease in multiple media and carry out an interface between the local and the global, has increased expectations of him. Without a doubt the baton of his mentor, Zahoorul Akhlaq, has passed on to him. Also noteworthy are Ruby Chishti, Roohi Ahmed and Khalid Chishti for their confident handling of unconventional material to evoke emotionally charged forms. And after this show, Sadia Salim, Shazia Wasim, Ghania Badar and Kaif Ghaznavi will be remembered as the ceramists who pushed clay into the ambit of the conceptual debate.

The display of Eqbal Geoffery’s work, which cannot be easily accessed via the gallery circuit, offered a rare viewing of this important artist who has distanced himself from the mainstream. The same is true of Kohari’s reliefs in the demanding medium of glass, which the resourceful artist has crafted in the most rudimentary conditions with the help of rural craftsmen.

In many ways, Kohari’s work can be viewed as a symbol of the hardships faced in the absence of state-run studio facilities and an economic safety net for artists over the last six decades. And it would not be amiss to dedicate the stately edifice of the Natinal Art Gallery to the indomitable spirit of the Pakistani artist.