Not that an army does not try. An attempt was made to block the launching of the book, subtitled Inside Pakistan’s Military Economy, on May 31, 2007, in Islamabad. The elitist Islamabad Club cancelled the scheduled launch at the last minute and no other hotel in the city was willing to provide any space for the function. 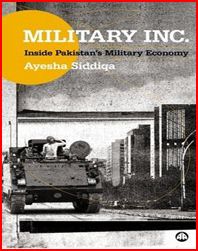 But this, as the headlines in the next day’s newspapers certified, was an abortive assault on what has since become more formidable as an idea. After a hastily assembled replacement launch and rounds of media attention, Siddiqa’s well-researched exposition of our military’s predatory involvement in Pakistan’s economy was transposed from the confines of academia to the realm of popular imagination.

As far as Siddiqa is concerned, the timing of the book’s publication was totally incidental. It had been planned much before the judicial crisis reached its feverish pitch in May. Nonetheless, it was in this highly charged environment that Military Inc. arrived on the scene. The timing, in that sense, became crucial. The book caused waves not just in Pakistan but also abroad and its reviews in major international publications were framed against the developing political situation in Pakistan. That crisis, by all means, has deepened, and Siddiqa’s formulations have gained a pulsating relevance in the context of the ongoing debate of the army’s role in politics, with specific reference to General Pervez Musharraf’s reluctance to take off his uniform. In fact the book has helped advance the debate to a higher level.

While the timing of the release of this book has created a sensation, this hype has also distracted attention from the theoretical and intellectual value of Siddiqa’s research and analysis. An appreciation of the contribution that the book has made to an understanding of ‘Milbus’ — a term Siddiqa coined to represent the military business machine — and its symbiotic relationship with our political history would demand a patient and careful study of the entire book.

In the first chapter of the book, titled ‘Milbus: a theoretical concept,’ Siddiqa has identified six distinct types of civil-military relations. In the first type, the military is subservient to civilian authorities. This relationship obviously underlines the strength of the civil society institutions, demanding a high measure of professionalism on part of the military.

In the second category, with some variation, the military draws its power from the dominant political party, or the ruling dispensation, though still dependent on civilian authority. The next three categories show different forms of military domination. But the final category, termed as warlord type, presents an extreme case in which “the military loots and plunders in partnership with dominant civilian players.”

Giving examples of countries that illustrate these six categories, Siddiqa has listed countries such as Nigeria, Ethiopia, Sierra Leone, Angola, Somalia and Sudan in the sixth slot . That Pakistan is not in this list is little consolation because we are located just a notch above, in the category in which the military has a parent-guardian role. With post-1977 Pakistan, Siddiqa has located two other countries in this slot: Turkey after 1961 and Indonesia after 1966. A comparative analysis of these three countries, with Pakistan as a constant point of reference, is the basis of Siddiqa’s main argument.

What is this argument? Our military has become a key player in the country’s power politics because of its business activities and the creation of a military capital that is different from the defence budget. One major contribution of Siddiqa’s research is to uncover this military capital, with a specific analysis of the Fauji Foundation, the Army Welfare Trust, Shaheen Foundation and Bahria Foundation. Irrespective of how military intervention is explained, political power becomes necessary for the military to advance its business interests.

Siddiqa uses the term Milbus to exemplify military capital that is used for the personal benefit of the military fraternity, particularly the officer cadre. Outside the domain of the defence budget, this capital “does not follow the normal accountability procedures of the state, making it an independent genre of capital.”

With this premise, Siddiqa goes into a meticulous examination of the consequences of this predatory activity in not only the economic context but also in its political and social implications. In 10 chapters, the book explores the evolution of the military’s role in Pakistan and the nature of its power in our political economy. Siddiqa has used secondary and primary sources, and the primary data comprises over 100 interviews with relevant individuals.

In the book’s final chapter, ‘Milbus and the future of Pakistan,’ Siddiqa raises a number of issues. Most critical of these is the possible impact of the military’s economic interests on our society and on Pakistan’s relations with its neighbours and the rest of the world. We must also wonder if we can move towards a viable democratic dispensation without a decisive shift in the role and aspirations of the military. As Siddiqa argues, “A military with such deep-rooted vested interests cannot be removed from a dominating position until there are significant changes in the country or in the international geopolitical environment.” There need to be certain conditions in which the armed forces are compelled to meaningfully cede political control to civil authorities.

Whether the hopeful developments that were rooted in the judicial crisis will go that far is still uncertain. But a few things, including the geopolitical environment of the region, are surely beginning to change.

Siddiqa is cognisant of the overall political environment in which her book, essentially an academic exercise based on meticulous research, has become a flaming point of reference. OUP’s managing director, Ameena Saiyid, said that the book has become their number one best-seller — having sold 10,000 copies in the first month of its release. Its success is solid proof of this fortuitous overlapping of the book’s arrival with a resurgence of the nation’s democratic aspirations.

Obviously, Siddiqa’s book played no direct role in the judicial crisis and the consequent decline in the moral authority of the military establishment. But its contribution to the conceptual appraisal of the power equation that exists in our political system is substantial. The sensitised intelligentsia is now obliged to try and comprehend the material that Siddiqa has put together against the larger backdrop of our political waywardness.

No doubt this objective — of arousing serious thought about these matters in the minds of concerned citizens — was Siddiqa’s intent from the very beginning. There is Faiz’s poem on the dedication page to express this longing. Talking about the cost of “political silence,” she says in her introduction, “The absence of serious challenge strengthens the military’s power, which in turn further weakens civilian institutions.”

But even when the civilian institutions are apparently beginning to awake from their state of torpor, one thing is unlikely to be realised in the near future: the GHQ initiating an internal debate on this book that truly constitutes a charge sheet.