In 2008, a journalist attacked the most powerful politician in the world with his shoes. But politicians fend off attacks from one another as well. In the subcontinent, it usually happens in parliament. Pakistanis and Indians alike are familiar with their elected representatives brawling like puffy-chested thugs. A look at foreign parliaments, though, proves that legislative violence is not the exclusive pastime of South Asian policy makers. Italy, Russia, Taiwan and even the UK and US have in the past seen their government debating sessions degenerate into fisticuffs. Taiwan, in fact, has had many episodes. In 2007, 24 angry members of the ruling party descended on a partisan speaker of the House, resulting in opposition members coming to his rescue. The melee combined punching, wrestling and spraying water, and sent one MP to the hospital with a head injury.

Take one unpopular piece of legislation, throw in some angry opposition MPs, complicate things with a locked room and then add some power tools and fire extinguishers, and out comes the most outrageous parliamentary rumble of 2008.

Shut out from a parliamentary committee room in South Korea’s National Assembly building where the ruling Grand National Party was unilaterally submitting a South Korea-US free-trade bill, emotional opposition politicians tried to break down the barricaded doors with a sledgehammer and chainsaw in November. They split one door only to find another behind. Still amassed in the corridor, the raging MPs, who were set on defeating the bill, were eventually counter-attacked by security guards spraying fire hoses and fire extinguishers, turning the scene into a full-on chaotic and bloody brawl.

Neo-Nazis don’t have a peace-loving reputation. Their violence, however, is usually reserved for those they deem genetically inferior. So when two members of the German neo-Nazi National Democratic Party started fighting each other in the regional Saxon parliament in Dresden, it was clear white supremacists were suffering from a lack of healthy outlets to vent their anger. The fight took place on November 12, between JÃ¼rgen Gansel and Peter Naumann, who have been reportedly nursing a long-simmering feud. Gansel recently made headlines when he said Barack Obama’s election victory was “a declaration of war” on “pure” nations. By the way, Gansel was punched in the face.

The US surge in Iraq seems to be impotent in the war-torn country’s parliament. A debate on the three-year security agreement between the two countries turned ugly when security guards reportedly roughed up an MP loyal to Shiite cleric Muqtada al-Sadr. Battered legislator Ahmad al-Massoudi is part of a bloc of 30 MPs espousing the cleric’s demand that US troops go home. Because the audio and video feed from the session was cut as Massoudi stood up and denounced the pact on November 19, details of the scuffle remain unconfirmed. There were reports, however, that Massoudi charged the speaker of the House, attempting to rip the draft agreement from his hands. As chaos exploded inside the chamber, elsewhere in the parliament building, Iraqi guards scurried to lock doors, in an attempt to prevent MPs from leaving.

Raising abuse of power issues against sitting premiers is risky business in Pakistan. Tahir Khokhar found out the hard way when two members of Azad Jammu and Kashmir’s ruling party attacked him during a March 6 legislative assembly session. Khokhar, a member of the MQM, was leapt upon and slapped when he broached the subject of a government-funded foreign trip made by the son of AJK Prime Minister Sardar Attique Ahmad Khan and what Khokhar called three “relatively unknown” women. Opposition members protested the violent outburst by standing on their seats and shouting before walking out. 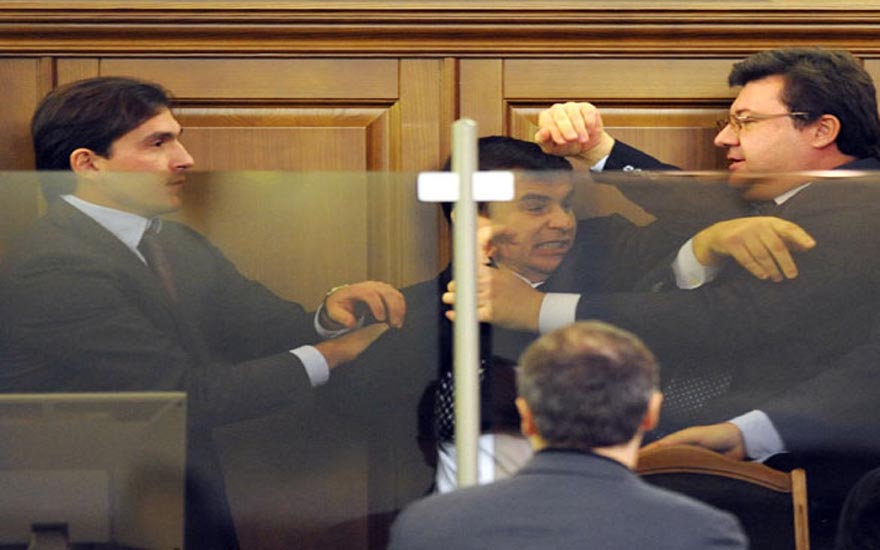 An on-going power struggle in Ukraine’s parliament turned physical on November 12, when lawmakers vowed to oust Speaker Arseny Yatseniuk. The vote against Yatseniuk, an ally of President Yushchenko, was so charged that when 10 MPs from his own party sided with opposition members, making his dismissal possible, testosterone overpowered good judgment and punches flew. The fight gravitated towards Yatseniuk, as rival factions scuffled near the speaker’s podium.