They are the shoes that launched a thousand, well, er, more like millions of replays.

Across the globe, there was a virtual stampede to watch footage of Muntazar al-Zaidi rifling his size-ten shoes in quick-fire succession at outgoing President George W. Bush. In just three days, YouTube videos of the December 14 incident racked up more than four million hits.

The emotional shoe attack not only inspired a rush of footwear jokes (including a call for the day to be marked as the “International Day of the Shoe”) but also roused Iraqis to take to the streets to demand the release of the detained al-Zaidi.

Newsline found much inspiration in the actions of the shoe-slinging journalist and decided to look back at other famous footwear moments in history.

[Editor’s Note: Since this now-famous shoe incident in 2008, a Pakistani man living in London decided to do the same to Pakistani President Asif Ali Zardari while the leader and co-chairperson of the PPP was addressing supporters and party activists in the UK capital on August 8, 2010. The shoe thrower, Shameem Khan, said he was a PPP activist who was disappointed in the performance of the PPP chief. “Leaders like these should get a reception like this, all over the world . . . because these are the traitors who are ruling all over the world,” Mr Khan told a British reporter.]

Muntazar al-Zaidi isn’t the only person in Iraq to express his disgust at a politician by using footwear as a weapon. When crowds toppled the al-Fardous Square statue of deposed Iraqi president Saddam Hussein in April 2003, emotional Iraqi men and women were immortalised on film assailing the fallen president’s likeness with slippers and shoes. 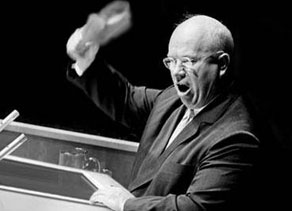 Shoe antics even made their way into Cold War posturing in October 1960. When a UN delegate from the Philippines, Senator Lorenzo Sumulong, amused with the USSR’s concerns over westerm imperialism, accused the communist giant of swallowing up Eastern Europe, Soviet leader Nikita Khrushchev waved his shoe in the air, slammed it down on the desk and called Sumulong a jerk and a US stooge. 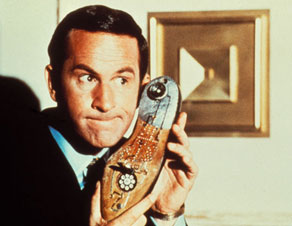 It was big, clunky and super silly, but fans loved it. Maxwell Smart’s shoe phone from the hit American television series Get Smart was as much an integral part of the satirical spy show as the star, Don Adams. Smart may have been forced to remove the shoe before using it, but in the mid-1960s it was the height (or foot) of telecommunications innovation. The shoe phone also doubled as a gun when Smart dialled 117. 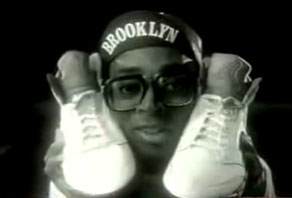 “Yo Mike, what makes you the best player in the universe?”

Spike Lee set up a now classic 1980s television ad with this line, in a pitch that gave all the credit of Michael Jordan’s basketball prowess to Nike. Assuming the role of Mars Blackmon, a character from his 1986 film She’s Gotta Have It, Lee peppered the basketball great with possible reasons for his genius: his dunks, his shorts, his shoes. Jordan rejected all. But Mars wouldn’t let go. “Is it da shoes? Is it da shoes?” His conclusion of “It’s gotta be da shoes” became an unstoppable schoolyard slogan. 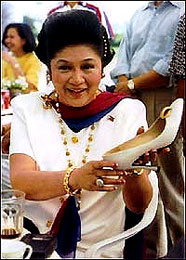 Long before Sex and the City’s Carrie Bradshaw unveiled her shoe fetish to the world, Imelda Marcos assembled a staggering collection of over 1,000 pairs of shoes during her days as First Lady of the Philippines. Marcos abandoned her high heels when she and her husband, Ferdinand, fled their country in 1986. Since then, she has rebuilt her collection, which reportedly topped 3,000 pairs in 1999. Marcos said many of these were gifts from wellwishers who “did not want a former first lady to be without shoes.” 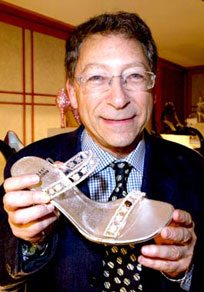 Say the words glass slipper and people think Cinderella. Mention ruby slippers and cinephiles instantly imagine Dorothy clicking her heels and saying, “There’s no place like home.” These pieces of fictional footwear are so iconic that they have inspired real designer versions. Stuart Weitzman designed Cinderella stilettos with 595 carats of diamonds set in platinum and ruby pumps studded with 690 rubies. In 2007, they were priced at $2 million and $1.8 million, respectively. 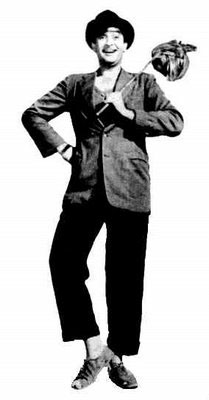 Shoe-themed songs have tapped their way into our hearts over the years too. Elton John, Adam Ant, Depeche Mode and the Beatles all had songs with the word “shoe” in the title. Paul Simon had a big hit with “Diamonds on the soles of her shoes” in 1986. But Elvis’s rendition of “Blue suede shoes” and Nancy Sinatra’s “These boots are made for walking” have stepped into a privileged place in our collective consciousness. Some would argue, though, that on the subcontinent, 1955’s “Mera joota hai Japani” is the footwear song that runs away with top honours.