Millions around the globe eat, breathe and live cricket. But then there are some families who breed cricket … well actually, cricketers, cricket-writers and cricket photographers.

To be fair to Iqbal Munir, one of Pakistan’s most celebrated cricket photographers and son of cricket commentary legend, Munir Hussain, he was able to quickly move out of his father’s shadow and make a place for himself in the cricketing fraternity.

As a youngster who grew up around cricket and cricketers, Iqbal moved smoothly into the role of the leading photographer for his father’s magazine, the hugely popular Akhbar-e-Watan. He learnt the ropes watching and assisting the legendary Farooq Usman, but when Usman parted company with the magazine in 1978, Iqbal very confidently donned the mantle and carried the lens for the family publication.

In a quiet and unobtrusive way, which has become his hallmark, he not just observed the players and captured them on lens, he built a relationship with them that allowed them to transcend the persona of a cricketing star and allowed him to capture their other, more personal side.

Talking to Iqbal, one gets a sense of a man at peace with himself, the path his life has taken, and the accolades that have come his way while traversing it. As a professional, he is always in search for excellence, but as a person, he is completely satisfied with what he has achieved.

“I feel I am one of the luckiest people. The period in which I did the bulk of the work was truly the golden period of Pakistan cricket when it had icons like Imran and Javed, and later on people like Wasim, Inzamam and Ramiz.”

While no stranger to the action in the middle, he carved a niche for himself by forging relationships with players and capturing their moods. These relationships allowed him to be taken in their inner circle, where they let down their guard and let him focus his lens on them in their homes and hearths. 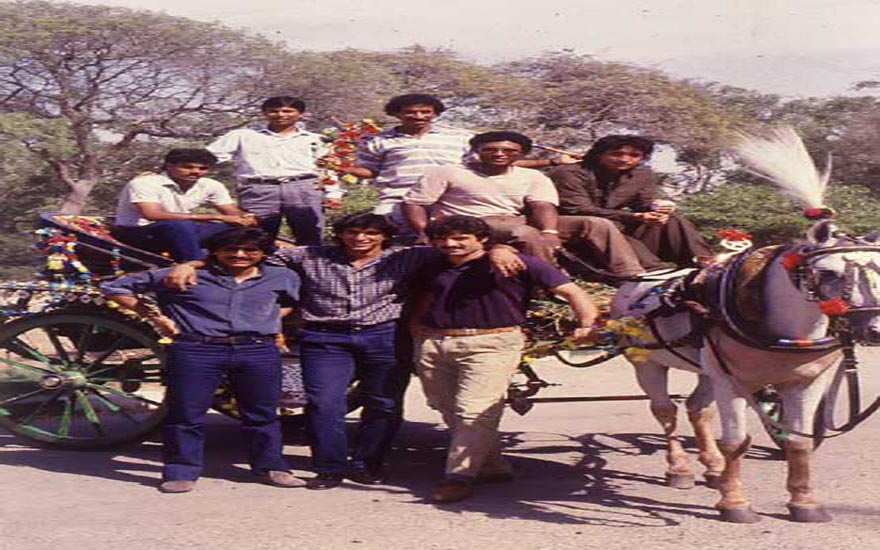 For those who have been brought up on a diet of stories of star cricketers putting on the prima donna act, his pictures of the reserved and aloof Imran Khan doing the bhangra with gay abandon after the World Cup win, of Test cricketers horsing around in a swimming pool, relaxing at home with wife and children or driving around in a horse-drawn buggy are sights that take nothing away from the iconic status of the players: they bring them to a level where their fans can relate to them as persons.

“I feel as if God placed me in that special slot where I was able to see and be with the best players of Pakistan, and this is why I can look back with nothing but immense satisfaction at my career. The game of cricket has been the reason for all the respect that I have received,” says Iqbal with quiet pride.

He narrates many incidents when he witnessed, first hand, the personal as well professional highs and lows of cricketers; incidents that affected their mood and mannerisms and their interaction with the media, but is grateful to God that they never had a negative impact on his relationships with them. He narrates several incidents where he was able to draw them out of the lows through cajoling and coaxing, and got them to agree to face his lens.

His pictorial book, An Eye on Imran, is a case in point, where he entered the lion’s den, and presented to his fans quite another facet of the supreme all-rounder.

Adopting the motto of ‘have camera, will travel,’ he is one of those lucky few who have witnessed several World Cup finals and was the only Pakistani photographer to be present Down Under when the boys brought the cup home. Those joyful moments have been preserved for posterity in his book World Champions.

Although he has done many things aside from cricket photography, such as sports marketing and management, Munir’s pictures are his true joy. Now, he has reached a stage where he wants to go a step further and preserve them in a manner where they can not only serve as a pictorial history of cricket in Pakistan but provide a new generation the opportunity to get a sense of what the larger-than-life players were all about.

He is planning to develop a database and a website with separate segments for all the great players who have been photographed by him. He has been spurred on by the tremendous response he received at a couple of recent exhibitions of his photos, that took so many cricket lovers down memory lane and generated a resurgence of nostalgia about the good old times.

Assisted by his wife Samina, who herself is a journalist, he relives those glorious moments while sorting and sifting through his photographic treasures, which one hopes he will share with the connoisseurs of the game sooner rather than later.

Click on any photo below to begin the slide show of Iqbal Munir’s work: