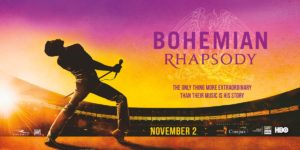 Bohemian Rhapsody – a fitting title for a biopic taken from the song that propelled Freddie Mercury and his group, Queen, from a rock band to rock gods. Some critics have trashed the film for ‘lack of depth,’ contending that it does not divulge enough information about the protagonist’s personal conflicts and demons. Audiences, on the other hand, have loved it, many even becoming misty-eyed through the movie’s intensely poignant moments. They maintain the film is a respectful tribute to one of the music industry’s greatest talents, and everyone already knows about the sadder, seamier side of Mercury aka Farrouk Balsara’s life.

And while the critics and audiences pooh-pooh each other’s views on the film, both sides acknowledge Rami Malek’s outstandingly, almost eerily perfect performance as the gifted, cross-dressing, outrageous iconic rock singer. That includes the performer’s overbite – owing to his four incisors, we learn – that gave him his exceptional 4-octave vocal range. Bearing a close resemblance to Mercury, Sacha Cohen Baron was originally cast for the role in 2010, but exited the project along with some of the producers earlier involved in the project, citing creative differences. It was then that the US actor of Egyptian descent, Rami Said Malek, bagged the role, and went on to completely own it, body language, quirks, et al.  Bohemian Rhapsody not merely introduced another generation to Queen’s music, but thanks to Malek, brought Freddie Mercury alive again.

Although fiercely private and shy by nature, Mercury led a lifestyle devoid of inhibitions even while still living with his conservative Indian immigrant Zoroastrian parents, which understandably caused tension at home. In the 1970s, when being openly gay would have been a kiss of death for his music career, Balsara would frequent women’s clothing stores for flamboyant outfits. There he got to know Mary Austin (Lucy Boynton), a store clerk, who became his girlfriend, for whom he would pen the 1975 ballad, ‘The Love of My Life.’ Mary found Balsara wild and exotic, accepted him as he was, and on occasion, even helped him with his make-up. But in the course of his meteoric rise, he, by then legally Freddie Mercury, became more clear about his sexual orientation, finally confiding in Mary that he may be bisexual. That ended any intimacy that still existed between them, but not the love, concern or friendship, which persisted to the end of his life.

Throughout his musical and life journey, even when riled by criticism, Mercury refused to succumb to any pressure to conform for any commercial or other reasons, resolutely marching to his own drummer. Despite his wild and risk-taking lifestyle, he remained clear-headed about his music, unequivocally stating once, when confronted by derision, “I won’t compromise my vision any longer.”

Issues came to a head with EMI executive producer Ray Foster (Mike Myers) prior to recording Queen’s fourth album, Night at the Opera. Preferring to stick to formula pop rock songs, Foster refused to release ‘Bohemian Rhapsody’ as the album’s first single, claiming no radio station would play the six-minute long suite. Refusing to compromise, Queen band members walked off, saying, “There’s no musical ghetto that can contain us.” Due to management issues, until then, Queen band members had received little money from their previous albums, no matter how successful. However after switching producers, Night at the Opera became the band’s first platinum-selling album.

The film artfully tip-toes around Mercury’s proclivities and excesses, his troubled relationship with band members, his break-up with Mary Austin, the destruction wrought by his manager, lover and supposed friend, Paul Prenter (Allen Leech), his conciliation with his family, his late-stage relationship with the man who would become his life partner for the few remaining years he had after contracting AIDS — the good, the bad, the ugly.

The occasional sacrifice of chronology and historical accuracy at the altar of commerce were perhaps too glaring for the film’s critics to digest. The producers, however, cite the right to a little “creative license,” since two of them were Queen’s band members, Brian May and Rodger Taylor, the creative and musical consultants for the film, and few knew him better than them. So while the movie may not be an entirely accurate story of Balsara/Mercury and the band’s history, it is a joyful celebration of their music and their legacy, backed up by a fabulous soundtrack.

Bohemian Rhapsody begins and culminates with Queen’s show-stopping 1985 Live Aid 20-minute stint, which was voted the single greatest performance in rock history. The film captures the essence of the consummate performer and the magic he produced with his band members – his “family” – which electrified audiences. Queen went on to evolve into one of the biggest rock bands of its time. Their album Night at the Opera’s lead song ‘Bohemian Rhapsody,’ which Mercury wrote when he was 29, became one of the highest selling singles in the UK and the world.

Ten years of complications in the making, the final cut of Bohemian Rhapsody finally comes to the screen to become a likely award-winning contender in several categories.