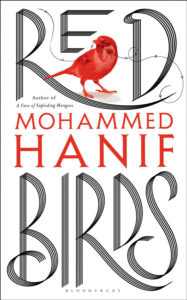 When it comes to literary styles, satire and surrealism seem best-suited to match the illogicality of war and its aftermath, as the works of Kurt Vonnegut and Joseph Heller can attest to. The inherent absurdity of war is perhaps even more heightened today, with global modern warfare’s reliance on remote-controlled drone technology which has transformed the relationship between soldiers and civilians into aerial bombers and dots on a grainy screen. Contemporary fiction writers have utilised tools of satire to explore this particularly 21st century style of warfare. Earlier this year saw the publication of the English translation of Iraqi writer Ahmed Saadawi’s Arabic novel, Frankenstein in Baghdad, an absurdist update on the original Frankenstein’s monster, only this time the creature is made up of body parts left in the wake of bombs.

It makes sense that Mohammed Hanif, Pakistan’s master of the absurd, would train his literary eye to the subject as well. His latest, much-awaited novel Red Birds, takes place in a refugee camp in a land already ravaged by war. But while Red Birds’ critique of modern war is as incisive and hard-hitting as all of his analyses and commentary tend to be, as a novel it is rather disappointingly underwhelming.

Red Birds tells the story of Ellie, a brash, cynical American bomber plane pilot who, instead of bombing the refugee camp he was ordered to, crashes near it and has to live among the people he was meant to obliterate. In the camp itself (ominously capitalised as the Camp) lives Momo, a snarky teenager whose entrepreneurial mind seeks money-making opportunities in his war-ravaged surroundings as a way to cope with the disappearance of his brother. Rounding off the trio of narrators is Mutt, who is indeed a mutt, Momo’s wise and often omniscient pet dog. All three characters, in their own ways, are grappling with the aftermath of a war that seems increasingly meaningless the longer it goes on.

The greatest strength of Hanif’s novel is his critique of the disconnected, outsourced and technologically-dependent methods of contemporary war. At one point Ellie, espousing the war-was-better-in-the-good-old-days mentality of his superior officer, muses: “We used to have art for art’s sake; now we have war for the sake for war. No lands captured, no slaves taken, no mass rapes, fuck their oil wells, ignore their mineral deposits. You can outsource mass rape. War has been condensed to carpet-bombing followed by dry rations and craft classes for the refugees.” It’s the kind of audacious, in-your-face commentary that Hanif excels at, both in his fiction as well as his non-fiction.

Further on in the narrative, Momo comments on the ridiculousness of neoliberal warfare, within which neo-imperial powers of the world commit unspeakable violence and then offer woefully inadequate relief and aid: “It was simple, they bombed us and then sent us well-educated people to look into our mental health needs. There were workshops called ‘Living with Trauma’ for parents, there was a survey about ‘Traditional Cures in a Time of Distress and Disorder.’ Our Camp was the tourist destination for foreign people with good intentions.” The ways in which war today is tied up with capitalism, empire and liberal politics are ugly, and Hanif does not shy away from exposing this ugliness. The voice of the three narrators is sometimes indistinguishable from one another, but it is a sharp, strong voice. Mutt, in particular, is a particularly engaging narrator, with a mixture of lovability and world-weariness.

Stylistically, Red Birds is different from Hanif’s earlier fiction in a number of ways. Most significantly, the satire of  A Case of Exploding Mangoes and Our Lady of Alice Bhatti was firmly grounded within the specificities of Pakistan’s socio-political and cultural landscape — whether it was an air force pilot in Zia-ul-Haq’s Pakistan or a working class Christian nurse in a chaotic, violent Karachi. By contrast, Red Birds is scant in grounding details. Its refugee camp setting is somewhere in a never-ending desert that has been the target of a prolonged, pointless war. This lack of specificity might have been a deliberate literary choice to reflect the interchangeability of the various regions of the world currently being bombed in the minds of the bombers, but it lends the novel an unreal air which makes it harder to discern an emotional thrust from the narrative. This is exacerbated by the way in which the characters are constructed — readers encounter each character through layers of satire and irreverence, which obscures any emotional core they might have. Ellie, in particular, never manages to become anything more than an obnoxious, cynical American, who espouses the racist rhetoric inculcated in him by his US military training, and the potential of any character growth he might go through at being forced to confront the humanity of the people he has spent a career dehumanising is sadly unfulfilled.

There’s also the matter of the plot: specifically, the fact that there is barely any. The book is nearly three-fourths of the way along, before there is any narrative momentum, and that is too late in the game by any stretch. Before that, Ellie, Momo and Mutt just sort of wander around and talk about their insights about war. There are hints of a plot — there is the case of Momo’s missing brother who was recruited to work for the Americans whose hangar lies near the camp, and who, along with a number of young boys, has disappeared within the hangar — but it remains vague throughout most of the novel.

There are interesting secondary characters, including an academic researcher, Lady Flowerbody, who is ostensibly in the camp to study the “teenage Muslim mind.” (Hanif is particularly excellent at skewering this type of person found in camps in the aftermath of war), but these characters, too, don’t go much beyond types. There is also a strange hint of misogyny in the narrative that cannot solely be ascribed to the warped narration of Ellie alone — he spends a lot of time complaining (in his head) about his nagging and emotional wife Cath, but Cath is not the only female character reduced to sexist stereotypes. There is also Momo’s “Mother Dear” whose characterisation is limited to “mother who would do anything for her sons.”

There is no doubt that Red Birds is extraordinarily astute in its observations on the 21st century iteration of war, where violence and trauma are wrapped up inextricably in the neoliberal system, international relief organisations and affluent fundraisers.

Towards the end of the novel, Ellie ponders over the complicity and codependency of Lady Flowerbody’s line of work with his own: “If I didn’t bomb some place, how would she save that place? If I didn’t rain fire from the skies, who would need her to douse that fire on the ground? Why would you need somebody to throw blankets on burning babies if there were no burning babies? If I didn’t take our homes, who would provide shelter? If I didn’t obliterate cities, how would you get to set up refugee camps? Where would all the world’s empathy go? Who would host exhibitions in the picture galleries of Berlin, who would have fundraising balls in London? Where would all the students on their gap years go?” It’s a remarkable passage, but a work of fiction needs to be more than the critique it is putting forth — it has to have robust characters and a compelling plot. It is a shame that Hanif falters with the latter aspects even as he excels with the former.