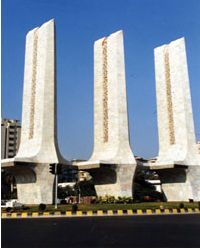 Wherever we have witnessed major conflicts in the last century, we also see art today in the shape of public monuments. This artistic intervention is increasingly becoming a social tool to heal national wounds inflicted by social discord and war.

Why does a nation need these tangible reminders, and how do ‘brick and mortar’ acquire a symbolic meaning that some times transcends the very event or person that they honour? While the answers to these questions have changed with time, the very act of monument-building remains intrinsic to national identity.

Recorded history reveals that most early monuments were built by conquerors to commemorate victories and heroism. In the 20th century, the pivotal role of civil society has bestowed a greater responsibility on the artist of the monument to reflect the ethos of a nation. The monument, as a repository of a nation’s memory today, is expected to emerge from the sensibility and sentiments of the people and not be imposed upon them through the edict of its ruling elite.

In a rapidly changing world, artists are seen to evolve new symbols as old one’s loose their vitality and relevance. Amin Gulgee’s monument in Karachi, with its reference to donkey cart racing, a popular sport among the coastal communities, is an important precedent in its acknowledgement of folk culture. The very grammar of monument design has embraced participation and reflection through different means. The vertical scale, once symbolic of power and glory, is giving way to a more organic horizontal sprawl that allows the visitor to enter the architecture at different levels of his/her being.

In Berlin, the recently completed monument ‘Field Of Stelae,’ a memorial to the murdered Jews of Europe by Peter Eisenmen, is being hailed as a contemporary memorial that, according to a press release, “quite intentionally refrains from imposing a clearly ‘readable’ symbolic statement.”

Pivotal to this monument design is spatial innovation, which explores the emotional and physical responses to space. The concept successfully turns modest building material like concrete and its simple forms into an experience that can be provocative and reflective simultaneously. 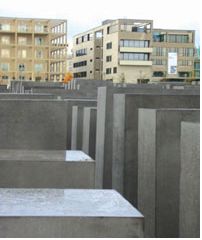 As I walked through this monument, which is a landscape of 2711 rectangular stelae that sit quietly like huge coffins, the first thing I realised after the entry into the space, which is several feet below street level, was that the land beneath the feet was undulating. Intermittently, one has to pass through a tight passage between towering walls of the box-like structures, and this confrontation with the changing height of the stelae offers no other symmetry than a distant, narrow view of the street on the parameter of the monument. To be completely dwarfed by tall stelae, and then walk a few feet on an incline to face an equally bewildered visitor, brings home that there is a deliberate attempt to keep your senses alert. Peter Eisenmen jolts you out of your mental and physical comfort zone and transforms the visit from a ritual of conscience into an introspective journey.

The process through which this monument was achieved is equally important, as it is reflective of the country’s passage to a participatory society. Since the time the idea was introduced by the journalist Lea Rosh, it has taken the German nation decades of social and political negotiations, and the very location in the prime administrative core of the city and in the environs of the other major historical monuments is indicative of how, in the end, all the stakeholders were unified in favour of the project. People’s representatives at all levels of government came together with members of civil society and families of the victims to chalk out the goals for the memorial, which include not only to honour the murdered Jews and keep their memory alive but also “to admonish all future generations never again to violate human rights.” Other objectives were to defend the democratic constitutional state at all times and secure equality before the law for all people and to resist all forms of dictatorship and regimes based on violence.

These are objectives that many regimes in the world since World War Two have failed to uphold and even the history of Pakistan, a young nation of 57 years, is marked by two violent social and political ruptures, the first marked its birth and the second the loss of its eastern wing. Despite these highly traumatic experiences, nowhere in the country has there been an artistic intervention that reflects the nation’s anguish and addresses issues of failure and loss.

In the country’s largest city, Karachi, that is host to the greatest number of displaced persons from these ruptures, we encounter two monuments on the main Clifton Road. Popularly known as the Teen Talwar (Three Swords) Monument and the Do Talwar (Two Swords) Monument, both are connected to the history of 1947. Since they were probably born on a civil engineer’s drafting table, to term them as artistic interventions would be a travesty.

No one seems to care that the redundant symbolism of a sword is in direct contradiction to the Quaid’s democratic ideals of Unity, Faith and Discipline, which are so blatantly tattooed on the surface of the drab marble of The Two Swords Monument. Perched on a small island of grass in the centre of a busy intersection, the only way it can be viewed is while waiting for a traffic light to turn green. Its scale can be best appreciated from the top of the Clifton bridge from where it looks more like an arched gateway than a monument.

Downstream is located the ‘Two Swords Monument.’ This name has been given to it by ‘the man on the street,’ mainly to mark the different bus stops on the long Clifton road. The main structure is an abstract form with sloping sides that have been sliced into two equal parts and can be read as two stylised swords. Built on an elevated platform, it also has a small dedication to the heroes of the Freedom Movement. Presently this monument has been fenced off and its location in the centre of the heavy flow of traffic discourages visitors.

These monuments, despite their tangible presence, are strangely ‘silent’ sites and have no presence in the nation’s consciousness. This has largely to do with the fact they were not built for an interface nor conceptualised with the input of the citizenry but were the product of a ruler’s arbitrary whim. Maybe if the stakeholders were allowed to take ownership through a dialogue that not only identifies the objectives of the monument but uses this democratic mechanism for the participation of multiple voices, only then can a nation negotiate an outcome that belongs to all.

An artist who was part of such a process would be better aware of his/her responsibility towards the aspirations of a people and all the aesthetic decisions would then be tempered with the shared sensitivity and sensibility.

As I write this piece, the legacy of Quaid-e-Azam is, once again, under discussion on the electronic media to commemorate his birth anniversary celebrations. The main difference this year is that there is a more progressive interpretation of the social implications of his philosophy. There is both a need for soul-searching and a growing will in civil society not to repeat its past mistakes.

Perhaps the monument of the future can prove to be the catalyst at this time to facilitate national cohesion. What better way than to seek inspiration from the Founder of the Nation’s fervent belief that all Pakistanis are equal, irrespective of their cast, creed or religion. Similar to the Lea Rosh initiative of a memorial to the murdered Jews of Europe that brought her nation together, over a contentious issue, we, too, may be able to build a monument that can bury bigotry and discord in an artist’s vision of the nation’s future.