Most year-ends involve winding up work and closing files on lingering projects. But 2005 has proved to be remarkably different on this front. President General Pervez Musharraf used the year’s last quarter to open up new fronts and plunged into his most contentious issue to date: building the controversial Kalabagh Dam.

Driving the present push for more dams is a publicly-expressed concern that the country is teetering on the brink of becoming water-scarce.

A burgeoning population, excessive water-wastage, and upstream water manipulation by India, is making water a commodity that communities might soon die and kill for. More dams are needed, goes the official logic, to trap a chunk of around 35.2 million acre feet (MAF), that goes into the Arabian Sea. And for this, the logic continues, a couple of dams need to be built on the Indus and Kabul rivers, including the Kalabagh Dam in the NWFP, and Bhasha in Diamer in the Northern Areas, Akhori in Attock and Skardu in the Northern Areas-the last two only after completion of their feasibilities.

But this logic holds good only on paper. On the stony ground of divided politics and deep distrust among the four provinces, the general acceptance of the need for better water management and storage has not translated into an endorsement of the President’s pitch for specific projects. The Kalabagh Dam particularly has become the proverbial red rag to the bull of enraged sentiments in the provinces of Sind, NWFP and Balochistan. The last six weeks, since the debate began on the building of dams, there have been dozens of rallies and protest marches organised by regional parties, that have picketed against the dam idea. All opposition parties and even government allies in Sindh, like the MQM and the ruling Muslim League and federal ministers from these provinces, have started to pull their weight against the scheme. It is a rare situation in which the government’s sitting ministers have threatened to resign if Kalabagh is built.

“They (our voters) will demolish the graves of our ancestors if the Kalabagh dam is built”, said a frustrated Sindh federal minister to the President when he was asked about the political costs of building the dam. Still there is no let-up in the official push for the dam. Insiders say that President Pervez Musharraf is totally convinced of the urgent need for building a water storage capacity for future use.

“It is not a sudden discovery on his part. He has been briefed on the issue dozens of times ever since he came to power and the data that has been accumulated, clearly indicates that the Kalabagh Dam is the most feasible project that is ready-to-launch”, says a member of a team of experts that has been rendering advice on the issue to President Musharraf. The same source also claimed that, for all practical purposes, the decision to build the dams was taken last year even before the two committees, the Technical Committee on Water Resources and the Parliamentary Committee on Water Resources, were established. “These committees though were tasked to furnish the technical and political feasibility of the project, but the data base that they were working with (mostly provided by Wapda, IRSA and Planning and Development Division), was already in favour of Kalabagh and other dams, and to the best of my information there were not many who believed that the committees would come up with a radically different position on the subject”.

Both the committees — whose reports were made public five months after they were finalised, and then too only because they were leaked to the press — have cast their vote in favour of the four dams. While the reports recommend different strategies for getting to the final decision, the four projects have all been declared kosher.

The final announcement on the score is still a Gordian Knot. President Musharraf’s establishment is using all its levers to bend and break the opposition to the Kalabagh Dam. The most obvious ally in this endeavour happens to be the Punjab’s Kalabaghphiles. “Total and unconditional support is available from the Punjab. If anything, their (the Punjab) lobby, is more keen to get the dam going quickly before other projects. Or at least simultaneously with other projects. But the President will make his own preference and priorities,” says a close aide to the President. 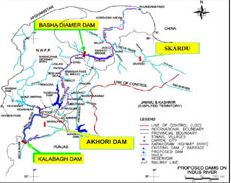 “Our political assessment of the reaction to the building of the Kalabagh Dam is quite hopeful. The report that has been submitted to the President of Pakistan suggests that apart from the ANP, whose political constituency has been tied to the anti-Kalabagh Dam stance, the general atmosphere in the NWFP is not all that aggressive and can be turned in favour of the project”, says an intelligence source. The same assessment also recommends that the main groups that need to be woven into the project’s favour in the NWFP happen to be the religious parties. The accompanying strategy for mustering support involves a complex interplay of carrot-and-stick in the shape of generous funding to the newly-elected local government Nazims, enforcement of party discipline on reluctant religious party figures and maximum projection of the positive benefits of the project through the national media.

For Sindh, the lower riparian province already writhing for being hoodwinked through the Chasma-Jhelum canal that cuts into its water share and feeds the private landholdings of Punjab’s elite, mostly with military backgrounds, the strategy is different. Arbab Ghulam Rahim, the province’s resourceful chief minister fresh from his award-winning performance against the opposition in the local bodies elections, is supposed to be won over by cajoling and coercion to back the dam. A package of assurances and additional funds for local development is to be made available. Some guarantees of a political share in the power pie after the 2007 elections is also on the plate to make the proposition more palatable. Parallel to this effort, are attempts to get prominent Sindhi politicians to speak in favour of the dam and the Pir of Pagaro has fired the first salvo already.

“We have to address the existing grievances of different groups and then the remaining opposition, a minority, will not matter. At any rate we cannot build a 100 per cent consensus. There will always be those lobbies who will be outside the general agreement”, says a source close to the President summing up General Musharraf’s thinking on resistance to a scheme that he is convinced is good for the country. So far the strategy seems to have worked. The Jamaat-e-Islami, Musharraf’s fieriest critics, have gone positively mute on the issue and Qazi Hussain Ahmad sounds cooperative when he talks about the need for a, “consensus for a technically reasonable scheme.” The Jamaat’s Punjab lobby has been effectively using its clout to bring about this softness of posture. The Pakistan Muslim League (N) has the building of the Kalabagh Dam as part of its manifesto, which has reduced its protest to the refrain of, “taking everyone along” and “not imposing a decision to the detriment of the country.” The People’s Party also faces the same dilemma. Its Punjab chapter has told party leaders not to force them to publicly oppose the dam — a policy that is totally contrary to the People’s Party Sindh’s total rejection of the scheme.

It is against this background that, increasingly the President’s own preferences seem to tally with that of the Punjab’s, creating an image of the federation being dictated to by the bigger province. At an anti-Kalabagh rally in Jehangira, the area where the Indus and Kabul meet , Punjab-bashing was as common as swipes against President Musharraf. “We will not accept Punjab’s dictation and if the President is interested in being its slave, then he is like a Ranjeet Singh for us”, said a leader of the Awami National Party, one of the main sponsors of the rally. “Make-up your mind: it is either the federation of Pakistan or Kalabagh Dam” thundered a Sindh nationalist at the rally.

This political slogan-shouting resonates in the bazaars where information about the whole project and its pros and cons is almost non-existent. Haji Gul, who runs a local fruit shop in Jehangira, finds it impossible to accept that the project is meant for NWFP’s benefit as well. “This is what they said about the Tarbela Dam. They took my lands and I am still to be compensated for the loss. Two of my brothers have passed away waiting for the promised compensation. Punjab does not allow us to have wheat and our mills have closed down. Now Kalabagh Dam will only mean further misery for us,” said the 60-year-old Mr Gul. However, the rally, supposedly a show for the decision-makers in Islamabad, did not pull in huge crowds. Barely 15,000 attended the meeting and there was no burning of effigies nor frothing at the mouth by the participants.

Yet a poisonous stew of diverse frustrations is on the boil. The dam has come up for a final decision at a time when nationalist forces are in a state of combat: Balochistan’s persistent problems of law and order have become the general rallying cry for a rebellious nationalist cadre; ANP and the Pakhtoonkhwa Milli Awami Party are struggling to build their lost support base against the religious right; the Sindhi nationalists are already on the back-foot and disempowered by a manipulated political system. The Kalabagh Dam provides all three an excellent opportunity to claim popular martyrdom.

Intelligence assessments of the trouble in Balochistan have consistently documented support in the shape of arms and money coming from Afghanistan and Iran, mainly funnelled by Indian consulates in the two countries. More recent assessments mention the Kalabagh Dam as a “potential sour point to be exploited by outside forces.” Ironically, the water scarcity issue has brought into focus an even bigger scarcity: that of a political system where national tension can be defused before it spills into the streets.