When the Senate was first established under the 1973 Constitution, it had 67 members. Its size was increased to 87 in 1985. Now, its total strength is 100, with 17 seats each reserved for technocrats and women.

Although the recent Senate elections marked the completion of Pakistan’s phased return to democracy since Musharraf’s takeover in October 1999, the present dispensation remains under the control of army stalwarts.

The resulting disarray in parliamentary affairs provided the establishment with an ideal political environment for engineering the senate elections — resulting in a King’s party majority — giving it legitimacy in an elected but pliant political government. Reports of seat-buying also circulated in the press, with the alleged price of a Senate seat rising to a whopping 70 million rupees. As expected, the ruling parties coalition won a simple majority with 4 seats. The support of 6 Fata members proved crucial in raising its strength to 53 seats — giving the PML-Q a majority of three seats. The coalition comprises the Muttahida Qaumi Movement (MQM), the National Alliance, Pakistan Muslim League-Functional, Pakistan People’s Party-Sherpao and some independent members (mainly from FATA).

A total of 186 candidates contested the 80 seats from the four provinces, and another 12 for the Islamabad and FATA seats, after 67 nominees withdrew by the February 8 deadline. The MMA, Pakistan People’s Party (PPP), MQM and Pakistan Muslim League-Nawaz (PML-N) got 18, 11, 6, and 4 seats respectively. In addition, the MMA also has the support of two or three independent members. Four candidates were declared elected from the reserved women’s seats, and the four contesting the technocrats’ seats returned unopposed from the Punjab.

Some of the prominent retiring candidates were former information minister, Javed Jabbar of the National Alliance, who also served as Musharraf’s information advisor for some time, and Syed Zahid Ali Naqvi of the Muttahida Majlis-i-Amal. The most prominent winners included adviser on finance, Shaukat Aziz, former Sindh governor, Mohammed Mian Soomro, MMA chief, Maulana Shah Ahmad Noorani, PPP acting secretary-general, Mian Raza Rabbani, former NWFP chief minister, Sardar Mehtab Khan, and ANP leader, Asfandyar Wali Khan, PML-N’s Ishaq Dar, as well as Professor Sajid Mir, who had been part of the MMA, before he parted ways with the alliance and got himself elected on a PML-N ticket. 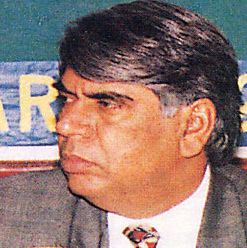 The PML-Q has accommodated six of Musharraf’s men in key positions in the military regime. They are Shaukat Aziz, Lt. General (retd) Javed Ashraf Qazi, Dr. Khalid Ranjha (elected from the Punjab), Dr. Hafeez Sheikh, Nisar A Memon, and Muhammad Mian Soomro (elected from Sindh). Two of them are in cabinet-level positions. It is expected that a few more will be offered senior government or cabinet positions, thereby strengthening the political clout of President Pervez Musharraf in the government.

Meanwhile, four senators in the federal capital were elected by majority vote in the National Assembly. Twelve MNAs from FATA elected eight senators from tribal agencies, making them vulnerable to pressure from central and provincial governments. Some of the MNAs cried foul and charged intelligence agencies with organising kidnappings to manipulate the poll results. A tribal MNA, Maulana Abdul Malik, narrated one such incident in the National Assembly, stating that he had been whisked away by some unknown persons to an unknown place, after meeting with the NWFP governor. He disclosed that he and two other MNAs were taken to the basement of a house, where their captors pressed them to vote for Ayub, Iqbal and other candidates, and threatened them with dire consequences if they chose to support the MMA. Traditionally, the MNAs from FATA always support the central government. However, this time, they seemed to have faced a dilemma, given the different governments in the centre and the province. Interestingly, before their alleged abduction, the MNAs had been guests of the NWFP chief minister, who happens to be from the MMA.

Interestingly, between 30 and 58 votes were found invalid. In Wasim’s case, 54 votes were found blank, while 30 were rejected in the election of Mushahid and Professor Ghafoor. This phenomenon, observers believe, is a visible expression of muted protest by members of the ruling coalition.

The election of Mushahid Hussain also drew a lot of interest, as he was tipped for the post of either information or foreign affairs minister much before he was nominated as a candidate for the senate. According to official sources, Mushahid was briefly banned from PTV on the instructions of information minister, Sheikh Rashid Ahmed. It was only after he complained to President Musharraf that the ban was lifted. However, as Mushahid’s appointment as either information or foreign minister would have divided the PML-Q, the government decided instead to create a new division under the Ministry of Foreign Affairs, called External Publicity.