“The Jamaat-i-Islami has no knowledge about the Al-Qaeda” 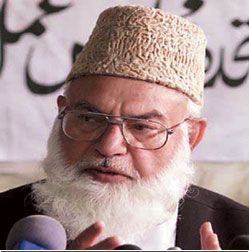 Q: Khalid Shaikh’s arrest from the residence of a Jamaat party member is the second such incident involving Al-Qaeda operatives. Does this not point to Jamaat-i-Islami’s connections with Al-Qaeda?

A: No Al-Qaeda member has ever been arrested from any Jamaat woman member’s house, neither in Karachi nor in Rawalpindi. Jamaat-i-Islami Pakistan does not allow its members to enter into any illegal activity. It is an open politico-religious party that functions according to its constitution. Jamaat has more than 50 years of established traditions that are well known to the people of Pakistan, as well as to any person who has been observing the political history of Pakistan. All its members are bound to work within the precints of the constitution, and according to the law of the land.

Q: A Jamaat leader has gone on record calling Osama bin Laden and the Al-Qaeda heroes. What is your comment?

Q: What is the Jamaat’s position on Al-Qaeda? Is there a Jamaat/Al-Qaeda nexus?

A: Jamaat-i-Islami Pakistan has no knowledge about the Al-Qaeda. There are widespread doubts regarding the very existence of any such organisation. It appears that the label of Al-Qaeda is used as a pretext to promote the vested interests of certain countries, groups and individuals, without presenting any credible evidence — and without going through proper legal procedures.

Q: Do you fear that the US may brand the Jamaat a terrorist group?

A: No, we have no such apprehensions.

Q: What are the political implications for the Jamaat in the wake of Khalid Shaikh’s arrest?

A: Khalid Shaikh’s arrest has no political implications for the Jamaat.

Q: Is the Jamaat heading towards a confrontation with the army? Isn’t your boycott of Parliament sessions in protest against the LFO aimed at deflecting attention from the increasingly incriminating evidence of the Jamaat’s links with Al-Qaeda.

A: No, we do not intend to enter into any confrontation with the ruling party or the army. All the opposition parties have adopted a unanimous stance in Parliament.