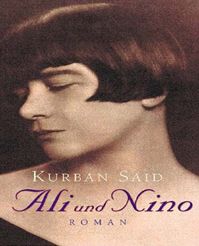 Ali and Nino is a captivating tale, as evocative of the exotic desert landscape as it is of the passion between two people pulled apart by culture, religion and war. This beautifully structured novel with simple but powerful language makes one feel poignantly the tragedy and the triumph of love against all odds. The novel is set in Baku, Azerbaijan, on the eve of World War I. Baku, a city on the edge of the Caspian Sea, lies poised precariously between east and west. Standing at the crossroads of Asia and Europe, Baku brings together east and west, Muslim and Christian, tradition and modernity — Ali and Nino. Ali Khan Shirvanshir, a Muslim schoolboy from a proud, aristocratic family, has fallen in love with the beautiful and enigmatic Nino Kipiani, a Christian girl with distinctly European sensibilities. Friends since childhood, their love for each other grows despite resistance from their families and their own divergent cultural backgrounds. This powerful novel shows vividly how the implacable forces of history bear down upon the human heart.

Azerbaijan and neighbouring Georgia played important roles in antiquity. The fall of Constantinople to the Turks in 1453, cut Georgia off from the rest of the western (Christian) world and made it prey to constant invasions by Turks and Persians. In 1801, Georgia accepted Russian rule willingly as protection from the Muslim invaders. Both Azerbaijan and Georgia became Soviet republics in the early 1920s. The love story of Ali and Nino unfolds against the backdrop of this rancorous history of blood feuds and bloodshed, of brutal carnages and massacres, conquests and oppression — a timeless struggle for the dominance of one culture/religion over the other.

Said brilliantly describes the birth of a new Caucasus by setting the characters in a brief, turbulent period in Azerbaijan’s history. The novel shows the struggle of various empires over the Caucasus as Russians, Persians, Turks, British all appear in the story. However, hardly anything is known about the author, not even his real name; Kurban Said is a pseudonym. One conjectures that he was a Muslim, and a Persian, who had escaped Soviet rule to Vienna where the book was published in 1937. He wrote Ali and Nino in German. The book has been resurrected, with a forward by Paul Theroux. In spite of the time that has passed since the first publication of this book, the author’s acute understanding of the clash between east and west makes it a timeless and timely book.

To be together, Ali and Nino must overcome blood feud and scandal, attempt a daring horseback rescue, and travel from the bustling street of oil-boom Baku, through starkly beautiful deserts and remote mountain villages, to the opulent palace of Ali’s uncle in neighbouring Persia. Ultimately the lovers are drawn back to Baku, but when war threatens their future, Ali is forced to choose between his loyalty to the beliefs of his Asian ancestors and his profound devotion to Nino. For Ali’s friends, who are eager to fight in World War I on the side of the Russian Czar, Turkey’s declaration of war against Russia changes things dramatically. In one amazing moment in the book, a devout Shiite named Seyid Mustafa doesn’t know whether to tell Ali to support the Czar or the Turkish caliph, who is a Sunni.

Ali and Nino is filled with vivid scenes of traditional Muslim life — including a poetry duel, a meddlesome eunuch and an ecstatic religious procession. Much of the novel’s charm comes from its vivid depictions of traditional ways of life. One such scene occurs during the poetry duel, before which “two valiant lords of song” hurl insults at each other. “Your clothes stink of dung, your face is that of a pig … and for a little money you would compose a poem on your own shame,” says one. “You can’t sell your talent because you never had any,” replies the other. “You live off the crumbs that fall from the festive table of my genius”.

In Iran, Ali realises that despite a cultural affinity, he cannot live there — it is not the Caucasus. While the melodic poetry of Middle Eastern rubayyats is the entertainment of choice in Iran, in Baku a wild Caucasian dance is danced at parties. “No, I was not made to display Ferdowsi’s verses, Hafiz’ sighs of love and Sa’di’s quotations,” Ali thinks. “The fragrance of the Persian roses had suddenly vanished, and instead the clear desert air of Baku and faint scent of sea, sand and oil was around me.”

Loyalty to this new independent Azerbaijan is what divides Ali and his father — not religion or tradition. For the father, who has always lived under imperial rule and whose ancestors died leading soldiers of one empire, a new Azerbaijan is simply too unfamiliar. He says to Ali before leaving Baku for Iran: “I don’t like our new flag, the noise of the new state, or the smell of godlessness that hangs over the town. I am an old man, Ali Khan. I can’t stand all these new things. You are young and brave, you must stay here. Azerbaijan will need you.”

Indeed, this is a great work of literature. Rarely have I been so engrossed in a novel like this. It has all the elements of greatness: well-developed characters, a vivid setting, a gripping plot, and an examination of larger themes — all crammed into this little-known, relatively compact work. It’s really an incredible book, one which, despite its age, seems quite capable of tackling the issues we see in our own world.