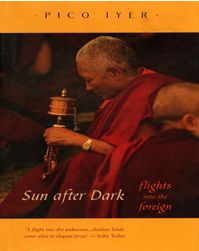 Pico Iyer is known as a travel writer, but he travels into the shadow lines of the mind as much as into the strange and wonderful places he writes about.

Literally bridging the gap between the east and the west, Pico divides his time between an adopted home in Japan and his hometown of Santa Barbara in California. At the heart of Iyer’s writing is the quest for the self and the metamorphosis it is prone to experience with changes in time and place.

In Sun after Dark, a collection of writings, Pico explores the parallel worlds we live in, and the strange encounters that ensue when the two worlds collide. ‘A Gathering Around a Perplexity’ is one such encounter, where Iyer and the singer Leonard Cohen meet at a Zen retreat in the hills of Southern California to do some soul searching.

The chasm between the old and the new is evident in ‘On the Ropebridge.’ Pico revisits the magical land of Tibet to find Lhasa transformed into a city “that looks like an Eastern Las Vegas.” The opening up to the outside world that began so tentatively in 1985 has ushered in an era of unbridled consumerism, complete with high rise buildings and department stores. However, the old Tibet refuses to die and Iyer comes upon a monk in a traditional monastery steeped in prayer, oblivious to changes on the wordly level. Tibet, he concludes, is a state of mind.

Thinking about those of us who live within multiple cultures, he says that we live “in two domains at once, and if we move too much to the side of either one, we run the risk of falling over the ropebridge and getting picked up and carried away by the rapids below.”

Pico is a writer who deals with complexity in simple prose. In ‘A Foreigner at Home,’ he centres on the theme of alienation and belonging in the works of Kazu Ishiguro. Christopher Banks, a character in Ishiguro’s novel, When we were Orphans, is a Britisher born in Shangai, a newcomer to the land of his ancestors. In the manner in which Banks negotiates his life in London, Iyer sees a reflection of Ishiguro’s own state of being: the child who moved from his native land of Japan to England with his parents 40 years ago is still in many ways an outsider.

Pico Iyer’s own parents migrated from India to the United States. So here we have a writer with a migrant background illustrating the anxiety of dislocation through the mannerisms of a character created by another such writer. Wheels within wheels, but carried off with rare panache.

Travel, in the tradition of Iyer, has no connotations of hedonism. While he is alive to the wonders of Angkor Wat, he is equally aware of the desperate poverty of the children who beg for a living around the ruins, of the “broken men” playing stringed instruments there, of the dark spirits that haunt every temple along with its apsaras or attendant angels.

‘Nightwalking’ is a story about jetlag that works on different levels. On one level is the extreme sleeplessness and fatigue that goes along with it, on another the way it sets the writer free to explore a different state of being. Awake all night, Iyer prowls the streets of strange cities. In a state between dream and wakefulness, he decides to celebrate “the dissolution of self” that accompanies jet travel. This is perhaps the aim of the inveterate traveller: “to walk through that archway of lights and become a different person.”

A visit to Bali (‘In the Dark’) takes Iyer away completely from the familiar world to a place where magic is more than a metaphor. “You go into the dark,” he says, “to get away from what you know, and if you go far enough, you realise, suddenly, that you’ll never really make it back into the light.”

The voyage is, however, described in more than metaphorical terms by Iyer. Sights, smells, the way the light falls, all are brought alive by an unfailing turn of phrase. If you happen to be an armchair traveller with dreams of taking flight in more ways than one, read Pico Iyer. It’s the next best thing to getting there.