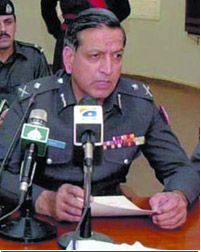 Q: How is the investigation into the Quetta attack progressing?

A: All three terrorists who were on a suicide mission have been identified; they are locals. We have contacted their families. Now the police is trying to locate their sponsors and [positively] identify the gang they belonged to.

Over 50 suspects have been arrested and all are being interrogated. There are a number of other agencies that are also working closely with the police.

Q: In the videotape and letter sent to the BBC, the Lashkar-e-Jhangvi has claimed responsibility for the attack. What are the police’s reservations about confirming this?

A: There are a number of facts I am unable to disclose at the moment. Those will be made public when the investigation is complete. Such cases always take time to be resolved. In 1997, 1999 and 2000, the Naqvis, including an army brigadier, were made targets. There were seven cases in which people were killed or injured. While the assailants have not yet been apprehended, two of them — Daudi Badini and Saifullah Kurd — have been identified, and declared proclaimed offenders. Some activists involved in other acts of terrorism have been arrested. The recent killings started last June. One person was injured in an attack in Sibi. In another attack, in Quetta a man was killed. Then the terrorists went for the big ones — first killing 13 cadets, and then 50 others in the attack on the imambargah.

Q: Have you seen the letter and the video tape? Are they genuine or fake?

A:Yes, I have seen them. Both the letter and the video tape are genuine. All three terorists involved in the attack appear on the tape. It is confirmed that they were on a suicide mission. All I am able to say at the moment is that the police is investigating every aspect of the letter and tape.

Q: How do you respond to charges that measures at the Asna-e-Asharia, the site of the attack, were shockingly inadequate, particularly in light of the fact that there has been a visible resurgence of attacks against the members of the Shia community?

A: The police force does not have sufficient manpower. On the Friday the attack on the imambargah took place, the MMA was holding a huge rally in town. It is incorrect that no police personnel were present outside the Asna-e-Asharia. Two police guards were present there and a motorcycle police patrol was providing extra cover. In fact, they were the first ones to inform police headquarters about the attack. But if you recall, the terrorists entered the imambargah and bolted the main gates from the inside.

Adequate security has always been provided to the imambargah, specially since the incident on June 8 [the massacre of the Hazara cadets]. And despite the fact that the IGP is not involved in routine law and order matters, I accept responsibility for any lapse that may have occurred on the part of my subordinates. Inquiries into the incident have already been initiated at both the judicial and the departmental level. If any officer is found guilty of negligence in the light of these inquiries, he will be taken to task.

Q:Are there any clues about who was funding the terrorists?

A: After inspecting the weapons used in the attack in the imambargah and the clothes worn by the assailants, it appears they did not have major resources. So far it seems more like a hurriedly planned attack rather than a long-term operation.

Q: While resigning after the imambargah attack, former Home Minister, Balochistan, Sardar Sanaullah Zehri, held you responsible for the incident, and maintained that as Home Minister he was deliberately sidelined from issues dealing with security. Would you comment?

A: I do not want to say too much on this subject, but as I earlier said, being the commander of the police force I accept the responsibility for any security lapse that occurred on the part of any of my subordinates. I will also accept the outcome of the inquiries that have been initiated in this regard. As far as the charge of sidelining Zehri from security matters is concerned, there are always issues pertaining to operational matters and investigations that cannot be shared with anyone, because if this is done, responsibility is diluted and the secrecy of operations gets compromised. [While he was in office] I never received a single directive from the former Home Minister regarding the improvement of law and order. Yes, I accept there were differences of opinion between us over the issue of a release of convicts on parole, and postings and the transfer of police officers. But I maintain no exchange of hot words ever took place between us on any occasion concerning matters relating to the internal administration of the force.