“The police left vulnerable citizens at the mercy of terrorists” 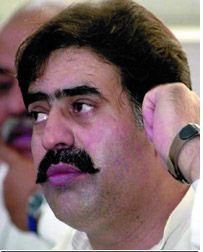 Q: What propelled you to resign from your post as Home Minister, Balochistan?

A: I resigned from the cabinet in protest against the series of killings of members of the Shia community in Quetta. I did this while expressing solidarity with our Hazara brethren who have become a major target of sectarian violence. [I believe] the police failed to protect vulnerable citizens, leaving them at the mercy of terrorists. And then no official from the police force was ready to accept the responsibility for the lapse in security.

Adequate security arrangements were not made for members of the Shia community after the first and second terrorist incidents targeting them, and ultimately more serious incidents like the killing of 13 police recruits, followed by the massacre of 50 members of the Shia community took place. In my opinion, the entire responsibility [for this lapse] rests with Balochistan’s Inspector General of Police, Dr. Shoaib Suddle. So in the given situation, my conscience demanded I resign, since it was impossible for me or my party (Balochistan National Democratic Party) to sit in the government.

Q: Weren’t you, as Home Minister, equally responsible for what happened?

A: No, I do not accept the responsibility as I was kept in the dark regarding security matters and the pace of investigations in respect of various incidents of terrorism that had taken place in the province. All decisions were being taken by the IG Police, and not on a single occasion was I consulted in this regard. Balochistan has become a police state and the intelligence agencies are holding the provincial coalition government hostage. The status of elected representatives has been reduced to that of government employees. Democracy in the country and in Balochistan is nothing more than a drama, as all decisions are being made by intelligence agencies with the elected representatives merely serving as a prop. I couldn’t care less about giving up my ministry; even the slot of chief-ministership would not be acceptable in these circumstances. It is not the first time I have been minister, but in the past, I enjoyed the powers conferred upon cabinet members in earnest.

Q:Why did it take you eight months to discover that the intelligence agencies were holding the provincial coalition government hostage and the IG Police had turned the province into a police state?

A:The interference by intelligence agencies in political affairs was not so marked initially. However, with the passage of time, it has become intolerable. I have been pointing out the attitude of the IG Police and the agencies to the Prime Minister, Governor and Chief Minister — the latter have even witnessed it, but nothing has been done. Four incidents where members of the Shia community have been targeted have taken place in one month. In the first, a Shia activist was seriously wounded in Sibi; in the second another Shia was killed in Quetta. In the third, 13 under-training Hazara police recruits were mowed down. And finally there was the tragic killing of 50 worshippers. Neither the “decision makers,” nor the IG Police seem to have assumed any responsibility for the carnage as not a single police officer has been suspended for negligence. All the concerned police officers should have been placed under suspension till the High Court tribunal that has initiated an inquiry completes its report. My party joined the coalition in the province after the general elections in the hope of bringing about good governance, but that never happened.

Q: Is there any truth in reports that you resigned from your post because you had learnt you were about to be sacked?

A: It is absolutely wrong. I sent my resignation to the Prime Minister and the Balochistan Chief Minister on July 5, the day after the imambargah carnage. This can be easily verified. From July 5 to 9, I was repeatedly asked to withdraw my resignation and given assurances that everything would be alright. I waited for four days to see whether the situation would improve and action taken in respect of the killings. When I realised nothing would happen, I announced my resignation before the press on July 10.