The very first monsoon downpour brought life in one of the world’s largest cities to a grinding halt, exposing the incompetence of Karachi’s civic agencies. Within a few hours, the country’s economic nerve centre was flooded, power lines were down and transport came to a virtual halt, creating havoc in the city.

As the monsoon rains lashed, the main roads turned into rushing knee-high streams with the storm water drainage system either clogged or, in some areas, simply non-existent. Despite a hefty 1.5 billion rupee expenditure by the city government in the last two years on the building and maintenance of roads and drains, gutters overflowed and dozens of people died by falling into manholes, or when they were hit by live wires or falling billboards. Eight people, including four children, died when a hill in Gulistan-e-Johar collapsed on their house burying them in their sleep.

Meanwhile, instead of tackling the situation on a war-footing, the city government run by the Jamaat-e-Islami Nazim and the Sindh government in which the MQM is a major stakeholder, tried to make political mileage out of the misery of millions. “We read so many statements in newspapers made by these so-called public representatives, but none of them have been implemented to help the people,” says a disgruntled citizen.

Most office-goers were stranded and had to wade through knee and waist-deep water to reach their respective homes. Unprecedented traffic jams choked the main thoroughfares and bumper-to-bumper traffic remained static for hours. “It took us four hours to go from Clifton to the Aga Khan Hospital,” said a couple who had a medical emergency.

The chaotic street conditions, however, proved lucrative for some. Street urchins earned a windfall, charging motorists to pull their cars out of the rain-flooded roads. Stranded commuters had to pay to have their stalled cars pushed to the side of the road. Taxis and auto-rickshaw owners started charging exorbitant fares, while most buses refused to ply their routes, leaving commuters stranded. “The bus driver stopped near Nursery and refused to go any further,” says Ghazala Abbas, who had to walk eight kilometres from there till KDA, in knee-deep water to reach home.

The worst affected were the residents of Karachi’s low-lying areas, especially Mehmoodabad, Lyari and Kharadar, where not only rainwater, but even filthy gutter water overflowed into homes. Pumping out sewerage in these localities was suspended because of power failure at the sewerage pumping stations.

The city government’s tall claims of having a solid infrastructure in place has been exposed by just one heavy rainfall. Most of Karachi’s storm-water drains have been either encroached upon by the land mafia or blocked by garbage. Ironically, most of the recently completed projects suffered the maximum damage. Ditches, over a foot-deep, appeared in at least five places on Jahangir Road. A 100-metre patch of road near the Mehran Highway in Malir had been left unconstructed, even after the major roads at both ends had been completed. In Liaquatabad town, two large ditches appeared under the Liaquat flyover, causing severe problems for motorists.

Pools of standing sewerage water has resulted in the outbreak of diseases, like conjunctivitis, gastro-enteritis and skin allergies. “I’m afraid that the stagnant water may spread malaria and gastro-enteritis,” says Dr. Jamal Nasir. The number of patients at his clinic has already increased, and is likely to multiply even further.

Despite all the havoc, city Nazim, Niamatullah Khan, claims that the situation is much better in Karachi today than it used to be. “Those who are criticising the situation should inform the public of what they had done for the city during their tenure,” he said, referring to his verbal war with the MQM that has been claiming that no major development work has been carried out in the city under the new city government system, headed by the Jamaat-e-Islami Nazim.

Karachi generates at least 61 per cent of the country’s revenue and is home to over 14 million people. Recent studies show that the city’s population is increasing at the rate of 4.8 per cent annually, as against the national growth rate of 3 per cent. “The mass influx of thousands of people from upcountry and neighbouring areas in search of better living conditions has left the civic agencies almost helpless to cope with the city’s myriad problems,” reads a report compiled by a local NGO. 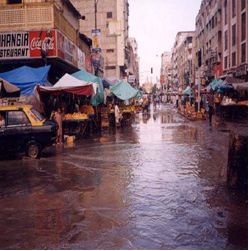 According to official statistics, there are around 650 katchi abadis in the city, accommodating 41 per cent of the city’s population. The inhabitants are mostly migrants from the Punjab, NWFP, Balochistan, and aliens from Afghanistan, Bangladesh and Burma.

While the city is undergoing one of its worst bouts of rain damage with the sewerage system on the verge of collapse, city nazim, Niamatullah Khan, says that the city government needs 5 billion rupees to solve Karachi’s perennial water and sewerage problems. “The city’s water and sewerage systems have nearly collapsed as a result of years of neglect.” The underground water distribution network has seriously corroded at places and urgently needs to be replaced, before any increased water supply can be supplied to Karachi. “This means that the water supply scheme of 100 mgd (K-3) cannot be activated before the faulty distribution system is replaced with a new one,” says Niamatullah Khan. According to him, the problem is that the city government does not have the resources to undertake the required repair and replacement work.

However, despite Niamatullah Khan’s claims of a shortage of funds, independent investigations revealed that the city’s government representatives are making no effort to carry out any development work, while in some cases, even the funds allocated for Karachi’s development have lapsed because the administration failed to utilise any funds during the last fiscal year.

According to documents obtained by Newsline, the city government was allocated 2,879,200,745 rupees by the provincial government in 2002-2003 to complete at least 68 schemes. These schemes included improving and renovation of hospitals, maternity homes, pumps for the distribution of water, fixing of fountains and other projects for development work in the city. Ironically, the city government failed to put a single penny to any use and no work was carried out at all on these schemes. As a result, the entire amount lapsed.

Meanwhile, the provincial government has been sending letters to the city government, requesting it to set up a sports stadium in each district of Karachi and has offered to provide the funds. Despite several reminders, nothing has happened. “The tragedy for the people of Karachi is the fact that the city government has failed to utilise even 50 per cent of the funds allocated for the development of the city,” says an insider.

According to the new system of city governance, the provincial governments have huge funds at their disposal and these funds are supposed to be utilised on various schemes, proposed by the district government through the Citizen Community Board (CCB). For example, the provincial government in Sindh, allocated 281.49 million rupees in the 2002-2003 budget for development works in Sindh province. Despite repeated reminders sent to all the nazims in Sindh, except for the nazima in Khairpur, Nafisa Shah, none of the nazims proposed any schemes for development projects in their area. “Nobody is willing to work,” says a Sindh government official. He said that these so called public representatives just make tall claims but don’t bother to initiate new schemes. Furthermore, he adds that since the budget allocated for development schemes lapsed last year, the Sindh government has, once again, allocated 283.80 million rupees in the current fiscal year budget. However, to date, no new scheme has been proposed by any city government in Sindh to utilise these funds.

In a telling instance of blatant corruption, a contract of 51 million rupees was awarded to a firm, Kamran and Kamran, for the maintenance of roads, bridges, footpaths, sewerage drains and making traffic sign boards for the calendar year 2001-2002. Ironically, the same contract was revised to a whopping 101 million rupees, without following the proper rules. According to the procedure, whenever the city government has to revise the allocation for any scheme, it is supposed to seek approval from the Council. However, in this case, the city government neither sought permission nor ever called a meeting to revise the allocation. The order was issued through Shafiq-ur-Rahman Paracha, who is Karachi’s District Coordinating Officer. “This raises doubts of corruption, because why would one then revise a contract by-passing all standard procedures,” says a Sindh government official.

According to some reports, instead of working on development schemes, the city government is allegedly involved in misappropriating 700 million rupees, from development schemes for the allowances of the Union Council nazims and has transferred this amount into their personal accounts. “How can you take 700 million rupees for the allowances of Union Council nazims, when even funds for staff salaries is not available on time,” says an official of the provincial Planning and Development department. He maintains that this would only be possible by cutting essential expenditures on medicine, blood supply and other basic necessities for the poor and needy. Some Sindh government officials allege that millions of rupees have been spent on purchasing luxury vehicles for the city government officials while development work has been totally sidelined.

According to informed sources, the provincial government is holding an enquiry against the city government on various accounts, including the transfer of the funds into the personal accounts of the Union Council nazims and for the utilisation of funds without following proper procedures. Says a Sindh government official: “We are looking into the fact that this huge chunk of 700 million rupees was spent without getting the competent authorities to authorise any expenditure.” Allegedly, city government officials have transferred funds for development schemes out of official accounts into their personal accounts and pocketed the interest.

Despite the havoc caused by the recent monsoon rains, the city government continues to concentrate only on scoring political points. Both of Karachi’s two major political parties, the Jamaat-e-Islami and the MQM, are mired in trivial issues of inaugurating small development schemes. Karachi’s nazim and MQM leaders were squabbling over a small dispensary in Korangi. MQM leaders claimed that the scheme was initiated by them in 1990 and the building was constructed in 1995. According to MQM’s central leader, Shoaib Bokhari, city nazim, Niamatullah, inaugurated the dispensary when there was no electricity, no water connection and no staff. When the MQM provincial minister provided the hospital medical staff with electricity and sorted out other problems, Niamatullah accused the MQM of trying to cash in and take credit. “I think the question is not about who is doing something, but focusing rather, on what is being done; and if the MQM assisted in getting the dispensary functioning, what is wrong with that?” asked Bokhari. According to the MQM, the city government’s claim of carrying out development work in the city is baseless. “As a matter of fact, all the development work in Karachi is carried out by the provincial government through the Annual Development Programme, Drought Emergency Relief Assistance, Education Sector Reform Programme, Khushal Pakistan Programme and Devolution Support Programme,” says Shoaib Bokhari.

Wherever the fault lies, the bustling metropolis of Karachi is in shambles, despite the fact that it generates more revenue for the exchequer than any other city. It is a city that has heard of many promises but never seen any being kept. And the new city governance is as bad, if not worse, than its predecessors.