“My entire house has been swept away by the rains, ” says Ghulam Qadir, of Badin village in Sindh. “No one came to our rescue as rain pelted down on us for three consecutive nights. My three-year old son fell seriously ill, but there was nothing we could do.” Finally, after an agonising 56-hour wait, Qadir, along with eight members of his family, was rescued in the operations launched by Maulana Abdul Sattar Edhi’s son, social worker Faisal Edhi.

Qadir was one of the lucky ones. Thousands were marooned across Sindh for periods extending for approximately a week, and many others feared dead, when relief operations failed to rescue those stranded in the floods following heavy rains in Thatta, Larkana, Hyderabad, Shikarpur and even the desert region of Tharparkar. At least 800,000 people and over 10,000 cattle have perished in the deluge.

Qadir says his home is now submerged in water, like 100,000 other houses in his town. “I work as a peon in Karachi, but immediately rushed home after hearing about the heavy rains in Badin. By the time I got there, I did not have a home left — there was nothing to see all around except water,” he says. “I enquired about my family and my kinsmen in the village took me to one of the relief camps. Thank God, they are all safe.”

The week-long rains, perhaps the worst since 1994, have wreaked havoc in Sindh. According to Faisal Edhi, “The death toll could be as high as 1,000 despite the official figure of 150 deaths. “Many people were trapped in bushes and were hanging from trees, but we could not get to them, as our boats were too small,” says Faisal. “Many women and children succumbed to illness brought on by the floods. Most contracted a high fever as they had no blankets to cover themselves with.”

“We cannot with accuracy assess the exact loss of life, because we have not been able to reach many areas,” states Faisal’s brother, Rizwan Edhi. Two helicopters, both belonging to the Sindh Police, have been unserviceable for a while. The Bell Jetranger belonging to the Edhi Trust has also been grounded since the aircraft went down near Churna Island on February 24. The only other civilian helicopter, belonging to a private operator, Dewan, was also grounded as a result of an accident.

“It was one of the worst experiences of my life,” says Faisal, who himself went missing for 22 hours, causing concern among volunteers and government functionaries alike. His father, Abdul Sattar Edhi, known as the “Father Teresa of Pakistan,” because of his contribution to relief and charitable operations through the years, was more worried about the welfare of others than that of his own son. “I told my people to look for others and not for Faisal,” the veteran social worker is reported to have said.

A catastrophe of this nature is nothing new to Badin, which in the past, has also been amongst the areas worst affected by torrential rains. However, no preventive measures have ever been taken. “God knows where the millions of rupees allocated for relief measures go,” says Qadir. 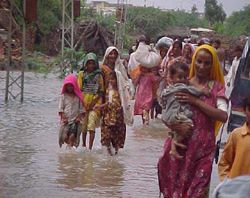 Qadir is among the hundreds of people, who have now been shifted to Karachi, into a relief camp. Zareen Bibi of Kadhan village, one of the worst affected areas, voices similar complaints. “I sold my earrings worth a few thousands rupees to provide food for my children. I had to fend for myself. No one came to my help,” she says.

In the submerged village of Badhmi, a woman who gave birth to a baby was rescued six hours later and shifted to a camp. Witnesses relate that as her home had been completely submerged in water, she had to take shelter in a tree, where the delivery process was performed by her family members.

According to the people involved in the relief operations, the biggest problem remains the administration’s inability to provide a coordinated response to natural calamities. The disaster relief cell fails to function due to the duplicity of command that exists in our civil administrative matters. In principle, civil armed forces should be called in for aid by the District administration, but this is made impossible due to the perceived differences of grade and stature amongst various services. “This lack of coordination results in poor utilisation of even the meagre resources that we have,” adds one of the responsible officials.

Karachi may not have received the worst rainfall, yet the accumulated rain water, even in areas equipped with storm drains, such as Lilly road, Governor’s House road or Shaheen complex, reflects the lack of adequate pre-monsoon preparation by the civic agencies. Various civic agencies have instead been embroiled in a tussle over who is responsible for relief efforts. The most contentious issue is that of jurisdiction. The recent attempt of the Karachi city government to undertake road repairs has also proved futile as rains have resuted in deep potholes on all roads and heaps of unlifted garbage.

Meanwhile, Prime Minister Zafarullah Khan Jamali visited Karachi and other parts of Sindh, witnessing the disaster on the ground, from the air, before heading back to Islamabad. The President has made no time to visit, as yet. Political parties have also been accused of using this opportunity to partake in cheap photo-sessions, rather than in tangible relief measures, while those representing Badin, are currently out of country on summer vacation.

On the flip side of the coin, while rain and floods have brought disaster to several districts of the Sindh province, they have brought relief for drought-hit Thar. “Despite deaths and disaster, the Tharis distributed sweets among themselves to celebrate rain in their areas,” says a resident of Thar, Imdad Chandio.

As 80 per cent of crops have been damaged, severe competition over the allocation of relief money is expected, with each concerned department trying to extract the maximum amount possible. While a political tussle continues between Chief Minister Sindh, Ali Mohammad Mahar and Governor Sindh, Ishratul Ibad on the one hand, and Mahar and Irrigation Minister, Arbab Rahim, on the other, the federal government is in a fix over how to distribute the money.

A confidential report submitted to Ishratul Ibad about relief work in Badin reveals that the civil administration, Zila Nazim and DCO were responsible for gross mismanagement, ” simply sleeping over a crisis of such horrendous magnitute.” While the Zila Nazim “showed up for ten minutes during the visit of the Chief Minister, and later during the visit of the Corps Commander, the DCO was called through the police,” says the report. The report apportions a major share of responsibility for the disaster to the irrigation department which failed to stop the inflow of water into canals. The canals were eventually breached, flooding agricultural land and village dwellings.

Meanwhile, profiteering from the disaster is also on the rise. “A large number of entries in camps have been faked,” says an official source. Instead of counting 13,000 people in one of the camps, 20,000 have been recorded. ” Sources add that there are few records of medicines and food parcels being provided to the people through official means. Most officials believe that it is unlikely that any action will be taken against those responsible.

Instead, observers believe that the post-rain scenario will witness a continuing fight for the spoils, while the intended beneficiaries of the relief effort continue to suffer.