Recipient of every single award for acting in her country and a number of prestigious international awards that recognise her contribution in the social and cultural sectors as well, Indian actor Shabana Azmi was in Karachi recently for the much-awaited performance of ‘Tumhari Amrita.’ Azmi had originally been invited 10 years ago, but the performance had to be cancelled virtually at the eleventh hour due to security concerns. Newsline managed to get a brief interview with the star, a few hours prior to ‘Tumhari Amrita’s final performance in Karachi… 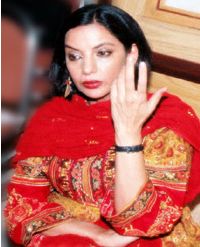 Q: Throughout your acting career, you’ve mostly played the role of a very strong-willed woman. Is this merely a coincidence or has it been a deliberate choice on your part?

A:I come from a family that believes art should be an instrument of social change. My father Kaifi Azmi was not only a very well-known Urdu poet, he was one of the founder members of the Progressive Writers’ Association, and president of the All Indian People’s Federation, both of which believe that art should be used as an instrument of social change. So it was only natural that I would wind up thinking that was the right thing to do. There was a time when I was not so caring about what I did, but I think the transition point came with two films I did — one was Arth, and the other was Paar.

In the case of Arth, it was a simple story that resonated in women’s hearts in a way that I suddenly became their saviour. I had hordes of people walking into my room, not as fans coming to see a star, but [as spouses] expecting me to resolve their marital conflicts, which was actually quite a daunting position to be in. I was an actor who had just done a part, but it made me aware of how people confuse the actor with the character. I decided to do something about it and, since then, I have consciously chosen to do roles of women of substance. I have played characters of feeble women too, but even if they are feeble, it is only up to a point before a transformation takes place and they move from a foundation of weakness to that of strength. Anything that reinforces or endorses the belief that women should be treated as subservient or secondary is something I wouldn’t do.

But, by the same token, I would also play a very helpless woman, even if she was weak throughout, because a sense of outrage would be created in the viewer that this should change. I think images of women are very important in terms of both the subliminal and the broader message they give.

Q: You’ve acted in films and theatre. Which medium have you found more fulfilling?

A: I’ve done 140 films and 10 plays, so there’s no comparison. I think of myself primarily as a film actor, and I’ve been trained and am a gold medallist in acting from a film institute. But, I enjoy theatre. When I was just about three years old, my mother used to take me with her on her theatre tours, and I remember Prithvi Raj Kapoor making clothes for me. So, in group sequences I would also be taken up on stage. It was by a process of osmosis that I was introduced to theatre.

Q: You’ve acted in foreign films as well. How have you found the experience different from acting in Indian movies?

A: There was no difference. Cinema is the same neurotic business anywhere in the world. Acting is certainly a neurotic job. I’ll illustrate with a film sequence: the sun needs to set at the precise moment when the tear drops from your eye, but what happens — the camera will run out of film just at that very moment, and we will have lost that moment forever! This happens continuously and anything that can go wrong will go wrong, just when you have done your best shot. So it’s a neurotic business.

Directors like John Schlesinger and Roland Joffe, whom I have worked with, have the yin and the yang perfectly balanced because they are as much female as male and, I think, in order to be a sensitive artiste, director, writer or painter you really need to have the yin and the yang balanced. Both these directors have a female side to them that helps them have sensitivity towards life. Shyam Benegal has that too, so do Satyajit Ray and Aparna Sen. So, all really good creative artists have this balance.

Having said that, when I first started working in the west I felt they have all the technology and management technique, but no human resource. We, on the other hand, have very little technology and management material but very high human resource. So it’s a question of both worlds learning from each other. We learn systems from them and they learn some of the advantages of the ad hoc system in which we work.

Q: You’re a committed activist for various human rights causes, including rehabilitation of displaced slum dwellers in Bombay. Any particular reason for being interested in this particular genre of social work?

A: My father wrote a poem called ‘Makaan’ in the early fifties, which dwells on the irony of a construction worker, who through his sweat and blood toils to make this beautiful building, but once the building is constructed the chowkidar of the building doesn’t allow him to enter it. Somewhere, that poem resonated with me. Whenever I’d watch a building being demolished I would feel it was unfair, for where would those poor people go?

It was at this point that I saw a film by Anand Patwardhan called Bombay: Our City which very sharply brought into focus the fact that demolishing slums is not the answer. You only create worse slums out of already existing ones. Upgrading slums, giving slum-dwellers better civic amenities and granting them land tenure is a better way of dealing with it, because until and unless you can guarantee employment in the rural areas, people will continue to migrate to the city in search of work. They find work but they don’t find housing. Unless there is land earmarked for the economically disadvantaged in the master plan of the city, we will perpetuate a state of illegality. So, that got me involved with a group called Nivara Hakk, which means the ‘Right to Shelter’, and I have been associated with the group now since 1986.

Q: You’ve been involved with a number of other social issues as well, such as health and women’s rights. What inspired you to fight for those causes?

A: Housing cannot be treated in a vacuum, because housing will necessarily affect women’s rights and children’s rights, which in turn will affect religious fundamentalism and other things. So, all the women’s issues and health issues I deal with, somehow concern the marginalised sections living in the slums of Bombay.

Q: Film exhibitors in Pakistan feel that the only panacea for the dying film industry is to allow the screening of Indian movies legally in cinema halls. Do you think it is a good idea for Pakistan to lift its ban?

A: I think we should do co-productions. It will be a win-win situation for both Pakistan and India. Pakistan has a lot of talent — very talented writers and actors. Yash Chopra doesn’t fail to tell me that if he had been allowed, every actor in Veer Zara, with the exception of Amitabh Bachchan and Shah Rukh Khan, would have been a Pakistani. A co-production cannot be heavily bent in India’s favour. If we start showing Indian films here, I would say, in the beginning it will prove to be more beneficial to India. However, ultimately, it will be beneficial to Pakistan as well, but co-productions are better. A product coming from both countries would have a wide audience all over the world, and they would benefit from each other’s expertise. That’s the way to go.

Q: You hail from a highly literary family. Have you ever thought of writing yourself?

A: I’ve been busy providing the inspiration to my father and my husband, for their poetry.

Q: Over the years, you’ve taken the play ‘Tumhari Amrita’ to many countries. Where have you found the response most over-whelming?

A: In many, many places. In India, England, many pockets of America, Pakistan — in fact, wherever people understand the language. It’s a play that’s been very, very successful everywhere in the world. For us, it was this great, long-cherished dream to bring it to Pakistan, because everywhere we did it, a large section of the audience would be Pakistanis. They would speak so gloriously about the play that I am really glad we were finally able to bring it here.

Q: What is the way forward for India and Pakistan?

A:The only way to go for Pakistan and India is towards peace and friendship, for today’s era is not one of countries only, it is of regions. In spite of great differences, the European Union has been able to do a lot of things because the countries have come together. We, as the subcontinent, can really give them a run for their money — there are so many commonalities.

I am not being a romantic and saying, “Let’s dwell on the commonalities and forget about the disputes.” I am saying the disputes need to be resolved, alongside greater efforts to establish people-to-people contact. Because, when people want peace and friendship, it becomes easier for the governments to negotiate, as then they are working not from hostility but from friendship.