After a brief, peaceful interlude, terror ripped through Karachi once again on March 2, when a suicide bomber broke through the security cordon at the US consulate and rammed his explosives-laden car into the bullet-proof vehicle of a senior US diplomat as he was entering the building.

That morning the police guards posted outside the heavily fortified high-security zone noticed nothing unusual as the heavy morning traffic streamed past on the roads around the consulate compound. But just after 9.00 am, there was a huge explosion, a ball of fire went up, and soon thick clouds of black smoke engulfed the site.

The blast, that took place behind the Marriott Hotel, in front of the Naval Central Surgery (NCS) and next to the US Consulate, was the most powerful explosion ever heard in the vicinity, where there have been several bomb blasts since 2001.

The explosion left four people dead, including an American diplomat, who was later identified as David Foy, his Pakistani driver and two others, including the attacker. More than 52 others were wounded, some of them seriously. The explosion left a 15-foot wide and almost 3.25-foot deep crater in the road. Twenty cars were also destroyed. Windowpanes on all 10 floors of the Marriot Hotel were shattered, and wreckage was flung as far as the Karachi Gymkhana and Metropole Hotel. The remains of one victim landed on the second floor of the latter. “When I first heard the explosion, it was so loud, I thought it was an earthquake,” said Sindh chief minister, Dr. Arbab Ghulam Rahim, whose house is located a stone’s throw away from the US Consulate.

The targeted killing of a US diplomat, just two-days ahead of the first-ever visit of US president George Bush to Pakistan, sent shock-waves across the country. Even though militants have tried to attack the US Consulate several times in the past few years, it was the first time they had managed to kill a US official. All those killed in the past were locals.

While the administration had tightened security in all major official buildings in anticipation of the Bush visit, the successful attack in the heart of the city at a key US installation, where security measures were ostensibly at their most stringent, shattered the myth of safety only too graphically.

The images captured on the cameras installed in the area — which have been repeatedly reviewed by personnel of various agencies — do not contain a clear picture of the suicide bomber. “You can see a bearded man parking his car, but his face is quite blurred and virtually unidentifiable,” said a source privy to the investigation.

The images show a shalwar kameez-clad, cap-donning, bearded man of medium height, who could be in his early 20s, arrive at the scene, park his white Suzuki Cultus and then walk away. Fifteen to 20 minutes later, the security cameras capture him returning, jumping into his car, and driving towards the incoming vehicle of the American diplomat. A reconstruction of events illustrates how, when the would-be assailant was sighted, a member of the para-military troops ran towards his car to stop it. Presumably alerted, the suicide driver accelerated, and rammed his car into the US staff van. With the collision there was a huge explosion, and both cars turned into fireballs, as burning debris flew into the air. Disclosed a source, “He must have been standing near the car, watching and waiting for his target.” The source added that it is not possible to ascertain from the camera images whether he was carrying a mobile phone or if somebody else in the near vicinity was giving him cues to indicate when to strike. And strike he did, with lethal precision. Ironically, right behind the consulate vehicle was an SMS van, belonging to the private security agency employed by the US Consulate. 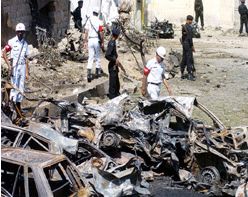 Intelligence officials who prepared the crime scene said the Suzuki Cultus used in the attack was parked along the wall of the navy hospital a few yards away from the rear entrance of the US Consulate. Officials quoting eye-witnesses said when the bomber was parking his car he was asked to move, but pleaded with the security guards at the Marriot Hotel next door and the consulate to give him a little time because his ‘boss’ had asked him to wait there.

Sources reveal that the Federal Bureau of Investigation (FBI) has now joined the Pakistani police to conduct the investigation and hunt down the planners of the suicide attack.

Initial probes have not revealed any substantial clues to the identity of the attacker/planners, but it is clear, say investigators, that it was a “well-planned” and “well-coordinated” attack.

“The manner in which the attack was carried out indicates it could have been the handiwork of an organised militant group, which suggests these militants are not only far from finished, but are in fact, able to plan and execute such huge attacks in the heart of the city successfully,” said a local investigator. He added that the planners of the attack had obviously strategised carefully. Earlier attacks got as far as the steel wall of the consulate building. This time the assailants chose to strike from the back of the Marriot Hotel, which is more vulnerable vis-a-vis security concerns because of the navy hospital in the vicinity. Dozens of vehicles ply the road there every day, and since many of these are carrying patients, sometimes in emergency cases, it is difficult for the security officials posted there to monitor each one or prohibit parking in the area surrounding the hospital.

Compounding the security personnel’s problems is a lack of surveillance equipment: all they have essentially are long stemmed mirrors. “With the mirrors they can only check the cars manually — and that too the boot or under the bonnet. But if explosives are hidden underneath the car seats they go undetected,” said a source. The planners of the attack were clearly aware of the loopholes in the security measures.

The investigators disclosed that the fact that a small car was used to carry out the attack was also part of the planners’ strategic design. “They knew that a small car would not attract attention, and furthermore is easier to manoeuvre in small spaces,” said one official.

Some investigators contended that judging by the nature of the attack, the probability is that this time around, unlike previous attacks, the militants were not targeting the consulate building, but the particular official who fell victim.

That the attack was well-devised and orchestrated can also be gauged from the fact that not only was the car used a stolen one, but trouble had been taken to have a fake number plate put on it, to make it even harder to trace. 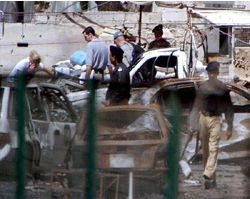 Investigations reveal that the white Suzuki Cultus used in the attack had been stolen from Lahore last May. The owner of the car is an Islamabad-based businessman. The vehicle was reportedly taken by an unidentified man while the owner and his wife were out for dinner. During investigations of the wreckage of the bomber’s vehicle, the police unearthed the number plate affixed to it. The registration number was found to be under the name of one Faisal Murad, who informed the investigating authorities that he had sold the car with the plate bearing that registration number to Ghulam Ali, a union council nazim of Osta Mohammad in Balochistan, on December 15, 2005.

When the police tracked down Ghulam Ali, a resident of Clifton in Karachi, they found a car bearing the same registration number as the bomber’s car (AGE-750) parked there. Technical tests determined it was an authentic number plate.

Subsequently it was learnt that the chassis number on the bomber’s car had also been tampered with.

According to the investigating authorities, the fact that the car used in the attack was stolen and the carjacker still remained unidentified, had made their job harder. “If we had even a sketch of the man who stole the car, it could have given us a valuable lead,” said an official involved in the case.

However, investigators claim that difficult though it may be, they do have some ideas about the perpetrators, based on the modus operandi of the attack. “We know that different groups employ certain signature methods to carry out their attacks. Although I can’t say with surety, this one seems to be the handi-work of an outlawed Sunni militant outfit whose cadres were trained by Al-Qaeda militants in Afghanistan,” said the official.

Reinforcing their suspicions, disclosed investigators, was the kind of device used in the attack: an explosive made from agricultural fertiliser. “There are only a few militant groups in the country who have the capability to convert urea into a deadly bomb. We know one of these groups uses large amounts of highly explosive materials in their operations. For example, in one attack they used 12 to 15 kilogrammes of explosives,” he said.

Other pointers to the identity of the organisation, said an investigating officer, is that the one they suspect usually uses young men for suicide attacks. Hameed Pathan, the suicide bomber in the first attack on the US consulate in Karachi, for example, was just 17 years old. At least 11 people had died in that attack and over 20 were injured. Likewise, on May 13, 2002, Asif Zaheer blew himself up in Karachi near the Sheraton Hotel, killing at least 11 French officials. He was barely 19 years old. At least three kilogrammes of highly explosive material was used in that attack, hidden in the car that the bomber used to ram into the bus carrying the French officials.

The Sindh government has announced a reward of five million rupees for anyone providing concrete evidence that will help lead to the terrorists. Whether the perpetrators of the attack will ever be apprehended, however, remains to be seen.