“[W]hat gave rise to violent separatism in Jammu and Kashmir, could such a development have been avoided, and what does the Kashmir conflict tell us about the role of ethnicity in conflicts and the risks of large scale war in South Asia?” 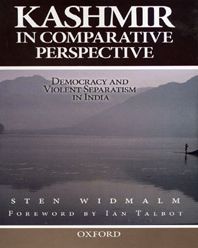 These are the questions Sten Widmalm attempts to grapple with in his book Kashmir in Comparative Perspective-Democracy and Violent Separatism in India. Widmalm, assistant professor and director of Development Studies at the Uppsala University in Sweden, has carried out reasonably in-depth research into the causes of the Kashmir conflict. A continuation of his 1997 dissertation, the work examines the Kashmir issue from the point of view of internal politics in India rather than the usual India-Pakistan conflict.

This unique examination of the issue differs from most of its predecessors in focusing more on the political situation and the failure of the democratic process in Jammu and Kashmir, which resulted in the descent into violence in the early 1990s. Widmalm explains the political events from independence onwards which led to creating the situation as it exists today.

He begins with the geographical, historical and political situation of the provinces of the north-Indian region which were collectively known as Kashmir. Following independence, Widmalm traces the intrigues and interests which resulted in the division of this state into Pakistan Occupied and Indian Occupied Kashmir.

From this point forth, the focus is largely on the democratic process and the political scenario within India. A constant on the periphery of this political environment is the conflict with Pakistan and the United Nations’ efforts, however ineffective, to resolve the situation.

Pakistan’s involvement, other than the wars that were fought with India over Kashmir, is seen to be minimal during the initial decades after independence. Widmalm talks to a number of high-ranking officials from the Pakistan armed and intelligence services and his research concludes that the most contributive factor towards the disintegration of civil life and the birth of violent separatism was the political manoeuvering that resulted in the dismissal of all pretences to democracy in 1989.

Before this, Widmalm argues, democracy had thrived in Kashmir and the democratic process had enabled Jammu and Kashmir to be integrated into the Indian Federation. “From 1977 onwards, for almost ten years, it seemed possible to refute Jinnah’s two-nation theory by pointing to the democratic state of Jammu and Kashmir, integrated with India after free elections.” However, for numerous reasons he explains and examines in the book, from 1983 onwards, democracy became a sham and the political situation continually worsened.

At this point, towards the end of the Zia regime in Pakistan, Widmalm sees Pakistan and the Pakistan army taking up an increasingly active role in the drama that played out in the early 1990s.

Widmalm compares the Kashmir conflict with similar scenarios that played out in other regions of India, specifically Tamil Nadu and West Bengal. He brings forth this comparison by first examining the rise of violent separatism in Jammu and Kashmir and then looking at the situations as they were in the other two states and how they were dealt with by the Indian government.

The biggest difference between Jammu and Kashmir and the other two movements is that the other movements never escalated into large-scale violence. They remained contained within the confines of political dialogue and demands, much like Kashmir in the late 1970s. Separatist parties and groups were content to function within the democratic framework and allow the political system to take its course. A violent course need not have been plotted in Kashmir either, had the major concerns of the separatist parties been addressed by the ruling Congress Party in India.

For Widmalm, the biggest contributing factor to such violent disturbances is the lack of integration of ethnicities and the treatment of such ethnicities by the centre. India’s treatment of the Kashmiris, according to Widmalm, has left a lot to be desired. Indian central government has never been able to fully integrate the Muslim-majority state into the federation because of the way they have dealt with separatist demands.

Finally, Widmalm discusses the violence and its escalation from violent protests to all-out war. He criticises the Jammu and Kashmir and Indian leadership for not being able to curb the violence at its inception. According to him, Farooq Abdullah, Chief Minister of Jammu and Kashmir, did nothing to help appease the separatists. The central government was unable to institute policy and strategy changes to accommodate the separatists and kept playing the blame game which resulted in the reciprocal war that has waged for more than 15 years.

Widmalm’s work, comprehensive as it is, is not for the informed reader. Although his arguments offer a fresh perspective on the violence and its emergence in Jammu and Kashmir, the presentation and writing are often weak. In particular instances, it becomes obvious that the author is writing a dissertation and not a book. The academic nature of the read detracts from the information it unveils.

For those well versed in the political situation that surrounds India-Pakistan relations and the Kashmir dispute, this book will provide very little by way of new information. For all other readers, this book has a unique perspective to offer and provides enough background information and detail to familiarise its readers with the intricacies of the Kashmir conflict.