Despite a pat on the back from President George Bush on his support for the so-called US war on terror, Musharraf was visibly uncomfortable at the press conference held after his talks with the US leader.

A nationwide shutdown at the call of the opposition parties and the death of an American diplomat in a suicide attack in Karachi had cast a heavy shadow over the visit of the American president.

On the day of his visit, Islamabad looked like a fortified city with some ten thousand troops and police deployed on security duty and anti-aircraft guns installed in the surrounding hills. Marksmen had taken up positions on the buildings along Constitution Avenue.

The extraordinary security measures were warranted, as the shadow of Al-Qaeda and the Taliban continued to hang heavy over Pakistan. During his visit, Bush came closer than he’s ever been before to Osama bin Laden, who is rumoured to be hiding in the tribal region bordering Afghanistan. During his 24-hour stay in the capital, his movements remained confined within a small radius, from the American embassy in the high security diplomatic enclave to the President’s House. Hundreds of political activists were detained to stifle anti-Bush protests.

The opposition’s show of strength on the eve of President Bush’s visit in Islamabad created an awkward situation for Pakistan’s embattled military leader. The protest rallies against the publication of cartoons depicting Prophet Muhammad (PBUH) served to ignite growing anti-government sentiments. The situation was fully exploited by the opposition groups, particularly the Islamists.

The furore over the Danish cartoons exposed the fissures that have widened over the last year. For the first time since Musharraf seized power in October 1999, there were frequent and violent protests in the country, drawing out thousands of people. The military has been completely bogged down in Waziristan, where it is confronting Al-Qaeda-backed tribal militants. The rugged tribal region is now virtually controlled by the local Taliban. The army, meanwhile, is presently over-stretched, fighting on yet another front in Balochistan.

Some analysts blame the government for encouraging the Islamists and fuelling protests against the cartoons to show the west that Musharraf is indispensable to them in a volatile environment. 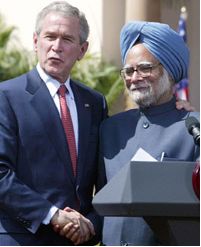 The high security trip to Islamabad was overshadowed by Bush’s high profile appearance in New Delhi. Its emerging strategic partnership with India indicates Washington’s new priorities. The two countries have reached a landmark agreement on nuclear cooperation. The deal is seen as a “de facto recognition” of India as a nuclear power. The deal allows New Delhi to acquire the most advanced nuclear technology for civilian purposes.

Defence ties between the two countries have also deepened. Joint military exercises, previously unheard of, have become more frequent. India has not only been offered the purchase of F-16 and F-18 fighter aircrafts, but also their co-production in India. India is fast emerging as one of America’s most important trade partners. US-India economic ties continue to grow, driven by private trade and investment. The development shows that Washington has de-hyphenated its link with India from Pakistan. “It is no more a zero-sum game,” said a US official.

This partnership with India is part of the US policy to contain China. The development will have far-reaching consequences, although US officials insist that the friendship with India will not be at the cost of their alliance with Pakistan.

Justifying their nuclear cooperation with India, US officials say that India had acted responsibly and had not been involved in nuclear proliferation.

“India has established, through this entire period, an exemplary record of controlling onward proliferation,” said Robert Blackwell, a former US ambassador to India and key national security advisor to President Bush. He said Pakistan could not get the same deal. “Given Pakistan’s terrible record regarding WMD proliferation, including A.Q. Khan’s notorious activities, who would responsibly advocate such a step?”

Musharraf, however, insists that Pakistan has not sought nuclear technology and that it is not bothered by the US deal with India. “We don’t want any such deal,” he told journalists after his talks with Bush. 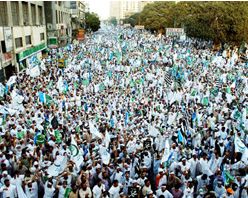 Musharraf got some reward for his steadfast support in the form of continued backing for his government. However, the increasing US emphasis on fair and free elections in 2007 makes him a bit jittery. He sounded very defensive while answering a question about his plan to restore full democracy. “My uniform issue will be settled in accordance with the constitution,” he said.

While praising him for his “courage,” Bush called upon his ‘buddy’ to do more to curb Islamic militancy and stop crossborder infiltration of Taliban insurgents into Afghanistan. The issue has become a sour point in the relations between Washington and Islamabad with increasing casualties among the US-led coalition forces.

The US-backed Afghan government of President Hamid Karzai had repeatedly alleged that the Tailban fighters and leaders were operating from bases in Pakistan. The issue became more critical with the fresh deployment of NATO troops in southwest Afghanistan. Tension was visible during Karzai’s visit to Islamabad last month. The Afghan president presented a list of the Taliban leaders including Mullah Omar who, according to him, were operating from Pakistan. The information was later leaked to some international wire agencies and newspapers. That further infuriated Musharraf. In an interview with CNN, Musharraf described the Afghan allegation as “nonsense.”

Musharraf may still have the support of Washington, but developments on the domestic front do not augur well as political discontent spills over into violence.