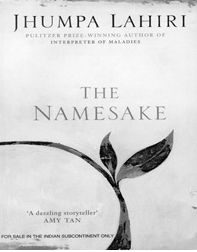 In the global village we inhabit, it is difficult to answer the question of where one comes from. Modern technology allows the rapid-fire exchange of ideas across increasingly irrelevant borders, cultural markers vanishing in the great melting pot that is our world. It is easy to forget that a mere 50 years ago, travel across land and sea took several months, the journey fraught with danger and not undertaken lightly. The air travel that is taken for granted by the children of the boomers was a luxury, restricted to a privileged few. Emigrating to a distant land was thus a more final act than it is today, contact with the home country harder to maintain.

Pulitzer Prize-winning author Jhumpa Lahiri’s newest book, The Namesake, opens with Ashima Ganguli, a pregnant immigrant Bengali, fixing herself a snack in a student apartment in Cambridge, Massachusetts. Craving a taste found in grimy stalls throughout India and Calcutta, she tries to recreate the flavour of her youth, but “as usual, there’s something missing.” The first page thus sets the tone for a book which explores the conflicted emotions of immigrant families as they try desperately to reconcile their native traditions with those of their adopted land.

Ashoke and Ashima Ganguli are in America to realise the former’s dream of being a professor. A scholar from the start, he lives for his books, saved from the wreckage of a train by the flapping pages of Nikolai Gogol’s The Overcoat, the book quite literally giving Ashoke another chance at life. The accident is a defining moment for the young Ashoke, and determines the course that his life, and that of his family, shall take. While Ashoke immerses himself in academia in America, his wife is left to fend for herself. Starting with her pregnancy cravings, Ashima typifies the conservative, lonely immigrant. Re-reading letters in a desperate attempt to maintain contact with an ever-removed home, she clings to the land of her birth, socialising with a growing circle of similarly desolate Bengalis. Her yearning for their native land is powerful, though the feeling is mingled with the dim realisation that America is now home.

Written in the third person narrative, the book is spread over a period of 32 years — from 1968-2000. The lives of the Gangulis are presented in moving tableaus, the reader allowed intimate glimpses every few years. The book begins shortly before the birth of Gogol/ Nikhil, the titular Namesake and Ganguli’s son. Named after the author whose book saved his father’s life, Gogol grows to adulthood, painfully aware of the incongruity of his name and appearance. Unable to empathise with his parents’ situation, he resents their quaint attachment to a land they have not lived in for the better part of their adult lives. Confused and embarrassed by the hyphenated identity forced on him, Gogol yearns to break free from the cloistered world of Bengali expatriates that he has grown up with. His parents’ failure to assimilate completely — their odd manners and accents — lead him to dissociate from them as soon as he gets the chance. The life-giving Namesake Gogol becomes Nikhil, the name a proud marker of the ethnic identity he has struggled with for so long.

Following Ã©migrÃ© parents and their thoroughly westernised offspring, the book is a telling portrait of expatriate life. Through the Gangulis, Lahiri shows how the natural-born children of immigrant parents are also conflicted in their cultural allegiances. As hyphenated members of the societies of their birth, they carry with them their parents’ sense of alienation. This feeling is heightened by the all too real awareness that, unlike their parents, they have no alternate country to call home. Straddling the cultural divide, these children are among a new breed of global citizens, belonging everywhere and yet, nowhere. For an ever-increasing number, home is, quite literally, where the heart is.