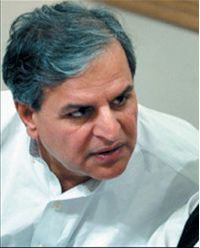 If the past is a point of reference, Javed Hashmi is an unlikely champion of democratic values. The acting president of Pakistan Muslim League (N) and head of the country’s largest opposition alliance, the ARD, Hashmi got some of his political career’s biggest boosts during the reign of Zia-ul-Haq. The long-ruling dictator brought him to the frontline of politics. A rabid People’s Party hater, Mr. Hashmi was rewarded handsomely with ministerial positions that saw a steady rise in his political stature.

But the past is irrelevant. The issues raised by Mr. Hashmi’s October 29 arrest on charges of sedition and incitement of disaffection within the armed forces of Pakistan, inevitably cast him in the mould of a victim of a system in which debating military matters is still taboo.

On the face of it, the whole episode reads like a tale of political miscalculation and over-reaction. Javed Hashmi should have known that reading before the press an anonymous letter to parliamentarians demanding the formation of a judicial commission to look into the Kargil conflict would not go unchallenged by the ruling generals. Especially since the letter carried the suggestion that it was written by an insider and was presented as an authentic expression of widespread opinion in the armed forces.

Similarly the government too, on its part, could have overlooked Hashmi’s swipes. By not responding, it would have turned his claims into hollow howls. That did not happen. Hashmi wrapped himself in the letter; the government smelt trouble and tried to nip it in the bud.

Javed Hashmi was upping the opposition ante in a bid to be noticed and heard. The Alliance that he was heading was constantly looking for issues to agitate against and embarrass the government. Although ARD insiders maintain that Javed Hashmi’s letter-reading was not part of a collective decision, the opposition did benefit from it. Now it has a handle to beat the government with, and garner more sympathy for its campaign. Already, the arrest has reverberated unfavourably with governments in the European Union. While the response from the United States has been measured, diplomats say that Washington is following the case keenly.

Suddenly, the opposition has additional ammunition to fire at the government. Its case against the government’s claim that there is genuine democracy in the country, has got a new lease of life. It is pitching the issue to be one of the fundamentals of democracy — openness, transparency, accountability and, above all, freedom of speech.

From the government’s side, the issue is not simply that of teaching one errant politician a lesson; it is using the case to define the limits of political conduct. Prime Minister Zafarullah Khan Jamali has already defined the new code of behaviour for politicians by saying that they should know where to draw the line. In practical terms, this means that democratic freedoms do not necessarily include the margin to take swipes at the army.

Javed Hashmi’s arrest is meant to serve as a warning to others who may want to take on the ruling generals in their statements. Official sources admit that Mr. Hashmi’s ‘wild action’ became particularly unacceptable against the backdrop of a slew of recent developments. The opposition’s demand for a probe into the Kargil episode is one of them. Others include the nasty controversy surrounding the Okara farms, immunity of the generals and the judges from declaring assets, growing focus in certain sections of the public and political opinion on the role of intelligence agencies and the army in politics.

More to the point, Javed Hashmi’s arrest sends a signal across the political landscape that the present setup is perfectly capable of taking a tough line against its opponents. Their position offers no immunity from official wrath.

That is why indications abound that there will not be a quick end to Mr. Hashmi’s ordeal. The legal system has suddenly slowed down to a snail’s pace on matters providing relief to Mr. Hashmi. The speaker of the National Assembly who, contrary to his public stand, was told about the impending arrest on the day of the event, has also found it convenient to seek the law ministry’s advice on his power to ask for Mr. Hashmi’s production in parliament. The advice did come, with the happy news for the speaker that the power was his, but by that time the assembly session had already ended.

Government officials and cabinet ministers miss no occasion to state their case against the jailed leader and ruthlessly suggest that he should have known better.

For most of them, Hashmi’s arrest has provided an opportune moment to restate their loyalty to the army, particularly to General Pervez Musharraf, indicating just how strong the civil-military nexus is and where the locus of authority lies.

Hashmi’s lawyers are of the view that the case holds no water. The FIR’s contents, they say, make a poor argument for punishment. The letter, they say, was not addressed to army officers, so there is no instance of incitement (124 a PPC). Similarly to ask for a judicial commission to conduct an inquiry into an event of the past is not seditious (131 PPC). They are also hopeful that if the matter comes up for a proper hearing, it will be an occasion for them to go deep into the very controversies the government wants to avoid: an enquiry into Kargil, the politicisation of the army and the curb on civil liberties

The government, even though supremely indifferent to the immediate reaction to Hashmi’s arrest, is aware that it is skating on weak political ground. A rearguard win-the-heart-and-mind action has been planned to plead the government’s case in the people’s court. Reports suggest that President General Pervez Musharraf is not happy with the government’s initial haphazard response to the opposition’s cries of political persecution.

A more systematic response has been planned, that puts a new-old spin on the matter of the arrest: the lack of political responsibility on the part of elected representatives, and the possibility that Mr Hashmi may be playing into the hands of anti-Pakistani lobbies.

The government and representatives of the military insist that Hashmi’s arrest does not mean that they are running short on patience or that the system is becoming repressive, intolerant of dissent, light on political grace and heavy on punitive action. They still harp on its many virtues. But as most students of Pakistan’s political history know, the worst crackdowns on basic freedoms generally start in the softest manner and for the noblest of reasons.