Talib Masih, a Christian street hawker and scrap dealer from a village near Gojra town, Toba Tek Singh, did not know that the wedding celebrations of his daughter would end in grim tragedy: six Christians were burnt alive by Muslims on blasphemy charges later that week. Incidentally, the charge of desecrating the Quran was levelled on a family in another Christian village, while the mob looted and destroyed a different Christian colony, located eight kilometres away from the site of the disputed incident.

The trouble began on July 25, 2009, when friends and family of Talib Masih had assembled to celebrate his daughter’s wedding ceremony in the village of Korian, about eight kilometres from Gojra city and 40km from Faisalabad. Korian has a large Christian community with nearly a hundred Christian families living in 60 houses in the village. Muslim friends of the family were also invited to the function. During the ceremony, some children started throwing pieces of paper in the air in a show of celebration. Ostensibly, some Muslims heard these papers were inscribed with verses from the Holy Quran and accused three Christians, namely Talib Masih, Mukhtar Masih and Imran Masih, of committing blasphemy. Intriguingly, Muhammad Ashraf, the man who lodged a formal complaint with the police, is not even a resident of the village where the incident took place. What’s more, he registered his complaint on the night of July 30, 2009 — five days after the alleged desecration took place. The burning incident took place on August 1.

Christian rights organisations maintain that on July 26, the day after the accusation was made, a meeting convened by the elders of the two communities, Christians and Muslims, had asked Talib Masih to offer an apology over the alleged desecration and that he had, indeed, apologised and the matter was resolved. However, enraged local Muslims tell a different story. In an FIR against Talib Masih, they say that a conciliatory meeting took place five days after the incident, on July 30, where Talib Masih had refused to apologise and abused the Muslims present at the meeting. They also claim that at this meeting Talib Masih had passed blasphemous remarks against Prophet Muhammad (PBUH)’s sayings and the Quran. Independent observers, however, told the Human Rights Commission of Pakistan (HRCP) that a quarrel broke out at the meeting and the Muslims beat up Talib brutally, and his wife and daughter had to come to his rescue.

On July 31, which was a Friday, announcements were made from the loudspeakers of local mosques in Korian and the nearby villages, asking the Muslims to assemble at Malkanwala Chowk in Gojra city on August 1, to take action against the Christians for committing blasphemy, which they said was punishable by death. Upon hearing this, most Christians in Korian fled their homes for safety. After a couple of hours, Muslims arrived on the scene in groups, armed with clubs, firearms and kerosene oil. They chanted slogans against Christians and began attacking their houses. First, they broke the electricity wires and water pumps to deprive the residents of the two basic necessities: electricity and water. This is a familiar pattern that was also observed in an earlier attack on Christians in Kasur, on July 1, 2009 in which more than a hundred Christian houses were burnt down in an organised manner. The mob in Korian reduced 57 houses to ashes, after looting valuables, such as television sets, cattle and bicycles from the premises. The marauders also attacked two local churches and desecrated Christian religious books. The next day, the police registered a case against 21 arsonists who were identified by the Christian community and a few others. 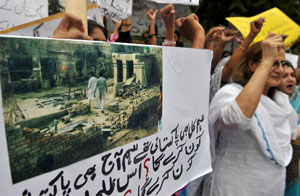 Enough is enough: Protesting against the violence targeting the Christian community. Photo:AFP.

It is widely alleged that a local cleric Qari Noor Muhammad, connected with a banned sectarian outfit the Sipah-e-Sahaba Pakistan (SSP), played a leading role in inciting hostility against the Christians. The cleric was not arrested till after the Gojra carnage. As the tension built up, Punjab Chief Minister Shahbaz Sharif, anticipating violence in Gojra, had alerted the police and intelligence agencies to ensure public safety. But when the mobs went on the rampage, the police looked the other way — a grim reminder of the civil agencies’ lack of capacity and willingness to handle sensitive and volatile situations, and the state’s inability to protect the citizens from organised and well-armed groups.

According to eyewitnesses, thousands of people, including clerics and local traders, gathered in Gojra as planned. Among them were activists of the SSP, who had travelled from their headquarters in the nearby Jhang district. The procession arrived at a Christian Colony, Chak 95-JB, which had nothing to do with the alleged desecration incident in the nearby Korian village. The police did not take any preventive measures to stop the hostile demonstration near a minority settlement at a time when tempers were running high.

Observers report that the Muslim protesters started pelting stones at the Christians and burnt down the house of Riaz Masih, an old, ailing Christian, who died of a heart attack soon after. Following this, the Christians too retaliated by throwing rocks and fired in the air to stop the armed men from marching towards their homes. A few Muslims also sustained injuries.

Meanwhile, many Christians fled their homes for safety and some locked themselves inside their houses to protect themselves. After a few hours, a mob of Muslims led by armed, masked men, assembled near the Christian colony and, using petrol and chemicals, set ablaze 68 Christan houses, burning six Christians alive, and shot dead Hameed Masih. The mob also looted valuables from the houses, desecrated copies of the Bible and ransacked two churches. The police, who were present, stood as silent spectators to the gory events. Initially, they even refused to register a case filed by the victims. It was only when the Christian community blocked the Multan-Faisalabad railway track for several hours and refused to remove the coffins of their dead from the track, that the FIR was registered. Later, the Punjab government deputed the Rangers to restore peace in Gojra and announced monetary compensation for the victims. 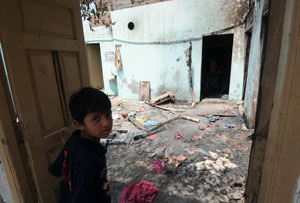 Nothing new: A boy looks on at the consequences of burning and looting of Christian homes by Muslims. Many such incidents have occurred in Pakistan in 2009. Photo: AFP.

The Gojra carnage is not a solitary incident of its kind, it is symptomatic of the simmering tension between the two communities following grave acts of provocation against the Christians. In March 2009, a Christian woman lost her life in Gujranwala after a local church was attacked. In April 2009, a mob attacked another church and Christian houses in Karachi’s Taiser Town in which one young Christian man was killed and several others were injured in the firing. On June 30, 2009, a mob attacked Christian houses in the village of Bahmaniwala in Kasur district, destroying more than 50 houses, damaging furniture and household goods, and stealing gold jewellery and cash from the premises.

This last incident of violence was triggered off when a Christian Sardar Masih, driving a tractor, asked a Muslim landlord, Chaudhry Muhammad Riaz, to remove his motorbike from the way to allow him to pass. When Riaz refused, a quarrel broke out between the two. Following the incident, announcements were made from mosques that Christians had committed blasphemy against Prophet Muhammad (PBUH), inciting the public to take action against the Christians of Bhamaniwala. Riaz also filed a criminal case with the police against 11 Christians. The next day, a group of angry men, wielding sticks and carrying petrol, attacked Christian homes. They burnt motorbikes belonging to the community and beat up every Christian they could find. The mob also attacked the local church with stones. No loss of life occurred, as most Christians had already fled their homes upon hearing of the planned attack. A Christian rights organisation, the National Commission for Justice and Peace, says a Christian woman suffered a miscarriage when she tried to save herself and a child.

A common thread runs through all the recent incidents of violence against the Christian community. The mobs are led mainly by members of the SSP, which is known to have links with the Taliban; the attacks are well-organised and planned well in advance and the attackers carry petrol and chemicals along, which gives an inkling of their nefarious designs.

It seems that after the army mounted pressure on the Taliban in Swat and the tribal areas, forcing them to retreat to the mountains, they have opened up a new front in the Punjab to create a law-and-order situation in order to divert the attention of the security forces from the tribal region. While jihad in Afghanistan and Kashmir has suffered a setback in recent years, those who were trained to carry out jihad in these areas have turned their guns on their fellow citizens. Meanwhile, the country’s civil administration seems to have no clue of how to tackle this unfortunate situation.