Many an inspirational story lies out there. Umair Pirzada’s is one such tale. Unable to walk after suffering a spinal chord injury in a swimming accident, he never looked back at what he lost. Instead, he tried to find every possible way to improve his condition.

“The doctors had said ‘he won’t be able to sit or even hold his neck,’” says Umair. And that was the case right after his surgery: confined to his bed, Umair could only lie face up, without moving his neck. Despite the doctor’s harsh verdict, the family made it a point to do whatever was possible. In some cases, the family makes arrangements for its own convenience rather than that of the invalid’s and such a person is confined to their bedroom. But in Umair’s case, the house was reconstructed to suit his needs.

“My dad got me a hospital bed at home. He fixed a TV on the ceiling so I could watch. He broke down all the doors in the house and widened their frames so that my bed could be taken into every room and he had ramps constructed in the entire house so that I could even go outside to the garden,” he says.

The living room was converted into his room for easier access, more space and to enable Umair to take his meals with the family. Nine years down the road, Umair roams the house, unaided, on his remote-controlled wheelchair. An elevator has been installed for him (as he lives on the first floor), and he drives his automated car which he shifts into and out of from his wheelchair, without assistance.

Umair is quick to notice that the next question coming his way would be about money. Yes, he says, having money does make a lot of difference, but it cannot buy willpower or shape one’s attitude. “I have seen people who have a lot of money but are ashamed of their child’s disability. I know of one such family, whose child has polio, and she has been sent to live at a centre, and when she was living at home, they would hide her each time guests arrived.”

Umair, too, has had his share of incidents where he has had to hear insensitive talk from others. “Once, I was shifting into my wheelchair from my car and a couple of people collected and started watching me; after a while one of them said to me, ‘If you have such a problem why do you drive?’” This was still said in a much milder way than what a guard at the Malir Cantt checkpost said to him when he forgot his entry documents to the area: “I told him I can’t walk, you can see my wheelchair and he says to me, ‘If you have so many defects, why don’t you keep a complete set of things [papers].’” But sadly, nothing better comes from the more well-to-do or educated classes either. A lady in his neighbourhood, on hearing about Umair’s accident, said to a close friend of his mother’s: “It’s good this happened to him, Mr Pirzada always bought him new cars and he would always drive so fast.” 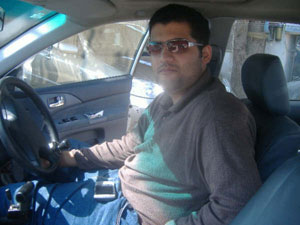 Just two semesters short of graduating from Baqai University, and the same attitude came into play again. The first encounter with Mrs Baqai was appalling. Umair recalls that his friends started dispersing when they saw her walking down the corridor. On seeing him, she stopped and asked: “What is the problem with you, why are you on a wheelchair?” Her response to Umair’s explanation was “Who gave you admission?” And after that first encounter, there was one problem after another. His request for a ramp was rejected, even though Umair’s father offered to fund it himself. Apparently, it did not complement the structure of the building. When classes were shifted to the Nazimabad campus, there were no elevators and his class was on the second floor. This time, permission to move his class to the first floor was refused. Permission even to appear privately for the exams was denied. With no option left, Umair gave up his education and joined his father’s business instead, with plans to complete his degree in the US at a later time.

To cater to people with special needs is not a priority in Pakistan, neither the people’s nor the government’s. If the government wants, it could issue immediate orders to the owners of the buildings to make them wheelchair-accessible, says Umair. “I have never been to the Millenium Mall, which is near my house, because it has no wheelchair access.” The only places accessible to him in Karachi are Park Towers and The Forum, not even restaurants because they too, despite being on the ground floor, have steps leading up to them. Narrating an incident from his trip to Birmingham he says, “I asked the guy who took me to a stadium ‘Is the stadium wheelchair-accessible?’ With a worried look, he said to me ‘They will be deemed criminals if they don’t have wheelchair access.’” Here, there is no parking for the handicapped either. “They have it at the airport, but government cars are parked there,” says Umair. “And it is common sense that if the person is disabled you need to keep enough space for a wheelchair to be taken out and for the door to be opened properly. So the lines have to be marked accordingly. But ironically, they have the lines so close together that you can’t even open the door properly.”

Even our national airline does not have the provision of a basic aisle chair, much less the attitude. “I was travelling to the US alone two years ago and PIA refused to let me board the aircraft, saying what if I needed something, who would look after me? Only one flight attendant said, ‘It’s okay I will look after him.’” Umair’s experience of travelling alone from Orlando to Houston in the US was the exact opposite of that in Pakistan. “The flight attendant took such good care of me and spoke to me pleasantly. She asked me if I could shift into the aisle chair by myself and when I did, she was so happy and there was applause from all the people around me, as if I had accomplished some great feat. The captain also specially came out to ask me how I was.”

This attitude, combined with proper medical facilities, are necessary, but proper medical help for spinal chord injuries is not available in Pakistan. “You can’t have orthopaedics and neurosurgeons treating you for it, you need specialists.” Access and awareness is very important. People in the villages suffer a worse predicament than those in the cities. “I went to interior Sindh and the people there didn’t even know what a wheelchair was. There was a man there who had a spinal chord injury. He had been lying on a bed of hay and when we turned him over, he had such horrible bedsores that you could see his bones.”

Umair had to go to India for a three-month treatment programme, because there are few proper rehab centres in Pakistan. It was there, at Dr Chapra’s centre, that the idea of establishing a rehab centre in Pakistan came to him. After discussing the idea with his father, he bought four acres of land in Karachi and his grandfather has registered a trust in his name. The next step now is to acquire funds. “For a rehab centre you require initial capital to buy and set up the machinery, and hire physiotherapists. Other than that, you don’t have to incur costs. I have divided the project into three phases. First, I want to establish a rehab centre, then a spinal chord centre, and in the third phase, I plan to establish a research centre; in India, they have already begun research in this area.”

Umair is swimming once again, that too, without assistance, and for pleasure’s sake, next on his list is to go skydiving. He was inspired by his uncle, who also suffers from a spinal chord injury, but recently went skydiving in the US and took a 14,000 feet tandem dive.