Munawer Ali Syed is a keen observer of reality, and his art has always explored issues related to anxiety and trauma incurred by adverse social and political forces on the human form. His earlier exhibitions targeted excessive media intervention, specially disinformation, political and military aggression, and nuclear weapons, all of which cast an ominous shadow on the psychological health of individuals. His current sculptures and drawings collectively titled Age of Deception, on show at Chawkandi Art, continue to comment on the negative effects a dysfunctional state can have on the human psyche. If his earlier protagonists appeared confused, distressed and overburdened with media hype and morbid reflections of fear and terror, the present assortment of ordinary individuals appears dazed, suspiciously compliant or entirely desensitised. It is the state of helplessness, apathy or unquestioning obedience that is being indicated, and this derailment of human nature is a far more damaging condition than stress or anxiety.

Still questioning the cultural, ideological and political framework of the nation, Syed’s new artworks access the traditional art of portraiture, but with a distinct inversion in the process of articulating his concerns. Sculpted in fibre glass, wood and paint, his Age of Deception portrait series are presented as familiar three-dimensional objects to the audience, but by using a concave presentation his works play a psychological game of visual illusion with viewers. Making positive use of negative space, Syed creates concave moulds of human countenances to express a convex appearance.

What is most captivating about the concave sculpture is that the faces appear to move (especially noticeable is the eye movement) as the onlooker shifts from left to right. The interactive gaze provokes the spectator’s imagination as the sculpture is no longer just a static object of scrutiny. This viewer engagement with the ‘animated’ but otherwise illusory effect is one of the levels of deception inferred by the artist — the difference between the actual and perceived reality. In the prevalent climate of media-hype, and overlap of truth and untruth, it is not uncommon to target and ostracise ordinary people by associating their turban or beard with terrorism or the veil with Islamic fundamentalism.

“The prince, king and queen (naam ki badshahat),” a set of three wooden figures with fragmented bodies, bound feet and sightless faces, are a candid expose of the farce governance has become here.

Other wood sculptures variously titled ‘Afghan Carpet,’ ‘Swati Topi,’ ‘Refugee’ and ‘Propaganda,’ alluding to the current socio-political mishaps, are easily assimilated but do not really challenge the viewer’s perception because we now live in the age of breaking news, where each successive report needs to be more shocking than the previous one to create impact.

The use of molten lead to obstruct the crevices in the wooden sculptures is a grim reminder of the increasing currency of arms and arsenal in our daily lives. Similarly, scratching and scoring marks on wood surfaces is, again, a deliberate enunciation of dissent. Using such ploys as a language of protest is common to sculptors, but Syed’s efforts in this regard are still rudimentary. A mature, thoughtfully conceived articulation in tandem with a more proportionate distribution of various elements in his sculptural compositions will add to the sense of optical balance that impresses the eye instantly. Presently, the physical content of the collection is overshadowed by the thematic strength of deception. Debating on the human condition is the most frequently worked upon theme, and still remains the most popular because of its direct relevance to the ‘humane’ factor of human existence. Syed’s Age of Deception translates the angst of our day and comes across as a concept-dominated show. His progress as a sculptor per se is also necessary. 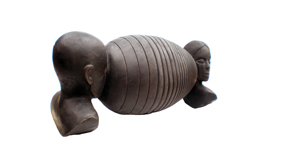 As an independent genre, sculpture has had a low profile in the art hierarchy in Pakistan, but over a decade ago a number of young generation artists adopted the medium with considerable enthusiasm, and it seemed as if the spell had been broken. A dramatically different and new idiom was in the making. Several years down the line, radical art/sculpture continues to be produced as the fervour to create is still there but the viability of such productions remains questionable.

The production process is arduous and a show can take anywhere between three to four years to materialise if wood has to be purchased, seasoned and worked upon. Non-availability of trained technicians, adequate studio space for work and storage of materials like wood, stone or marble retard growth, but most of all it is public attitude towards sculpture that impedes its progress. Religious constraints are so ingrained in people’s minds that three-dimensional objects continue to be viewed with suspicion rather than be enjoyed for their aesthetic value.

Another component of Syed’s show, selections of heavily scored criss-crossed drawings attempting to register feelings of confusion and uncertainty came across as works still in the process of being resolved. Most young sculptors are having alternate solo showings of drawings and paintings. This practice conforms to the current trend of working in several media independently or through crossovers with other disciplines. However, it may be also indicative of the sculpture genre’s uneasy standing and the need to pursue alternate means of expression.