China banned Alice in Wonderland for several years because the animal kingdom was upgraded to human form, England banned D.H. Lawrence’sLady Chatterly’s Lover until 1960 for its sexually explicit content (E.M. Forster was among those who defended the book at the trial), but India has now gone one step further and allowed the banning of former foreign minister Jaswant Singh’s bookJinnah: India-Partition-Independence in the state of Gujarat.

Turns out that the book is being secretly smuggled into Gujarat from nearby Rajasthan, probably because Gujaratis really want to know what the fuss is about. They’ve watched Jaswant Singh live on television, every muscle and twitch, expressing deep anguish and betrayal at being expelled by the Bharatiya Janata Party (BJP)  — the political party he loved and served ever since it was formed in 1980 — for writing a book on the partition of India in which Mohammed Ali Jinnah plays the lead role.

Singh seeks to right the balance on the pride of place that Jawaharlal Nehru occupies in the Indian pantheon, right there on top along with all the gods, and Jinnah’s somewhat murky positioning as he stormed out of the Hindustani Undivided Family in 1947.

History, which seems to have such a grip on the irony business, records of course that three days before the partition of the subcontinent in which more than a million people died and nearly eight million lost their homes and hearth, Jinnah went to the Constituent Assembly and delivered his now-famous speech on how Pakistan was going to be a secular state, in which Hindus could go back to their temples and Muslims to their mosques and none of it would impact their lives as Pakistani citizens.

But as Stanley Wolpert, Jinnah’s other noted biographer writes, “What was Jinnah thinking of?” Having played a key role in souring and spilling the milk, in splitting the country along communal lines, Jinnah was now turning the other cheek? This is the question that Jaswant Singh seeks to answer in his book.

“It saddens me that I have been expelled on the grounds of writing a book,” Singh told journalists soon after he was told on the phone that the BJP had thrown him out for his attempt at de-demonising Pakistan’s national hero. The party’s attempt at disciplining one of its senior-most members would have been farcical if it wasn’t so serious. By doing what it did, the BJP sent a message to the country that it wasn’t going to brook dissent and allow any deviation from the party line. 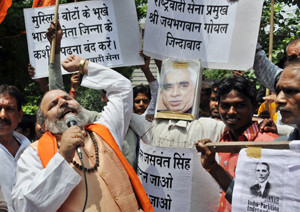 But what is the party line? That Sardar Vallabhai Patel, a senior Congress leader and independent India’s first home minister, is a central BJP icon because of his no-nonsense approach towards the country’s Muslims (in opposition to Nehru’s wishy-washy secular nonsense, claims the BJP). But as Jaswant Singh points out, it would be unfair to paint Patel in such colours, not only because he was often “far off the mark” on several occasions, including the division of India, but also because he was first of all a Congress leader and only then a right-wing one.

So when Singh rhetorically asked his now-former party, through the press, what they thought of the fact that it was their beloved Patel, who after the assassination of Mahatma Gandhi in January 1948, had banned the Rashtriya Swayamsevak Sangh (RSS) (another banning, this time wholly necessary), the question echoed around the country but found no takers within the RSS family, the mother lode of the BJP.

Clearly, Jaswant Singh’s writing of Jinnah, the banning of the book and the subsequent unrest within the BJP — another ideologue and close confidante of senior leader L.K. Advani, Sudheendra Kulkarni has quit and journalist-turned-BJP member and former telecom minister Arun Shourie has dubbed the party, “Alice in Blunderland” — marks the party’s gravest crisis in years.

It reflects the party’s lack of introspection over its recent debacles and its refusal to ask why it lost India both in the 2004 and the 2009 elections. The obvious answer to that is the party’s unwillingness to find a moderate leader who can represent all of the country, somewhat along the lines of former prime minister Atal Behari Vajpayee.

Jaswant Singh, with his refusal to become a primary member of the RSS (believing that his stint in the Indian army was good enough to make him a patriot) and his studied lack of hypocrisy (his enjoys his daily evening drink, a mixture of wine and soda), was one such option, even though his refusal to be a fellow-traveller of the RSS ultimately made him a political lightweight.

On the other, the BJP book ban on Jinnah underlines that the debate around the idea of India still continues, 62 years after partition. Is India, then, the largest democracy in the world with its attendant ideals of free speech and expression, or is it an incoherent state that remains unable to fulfill its own promises despite elections every five years?

Considering that it was the BJP under Vajpayee which repeatedly extended its hand of peace to Pakistan — despite Kargil in 1999, the attack against parliament in 2001, the attack against the Kaluchak army camp in 2002 and Operation Parakram in 2003, when both armies were eyeball-to-eyeball for nine months along the border — Jaswant Singh’s long eye on history has fallen on rough soil.

There’s a third irony in this continuing story: the book is doing brisk business, the controversy ultimately helping it to sell even more widely than the author could have hoped. In a few weeks he will wend his way to Pakistan — to more stories on the front pages of newspapers.